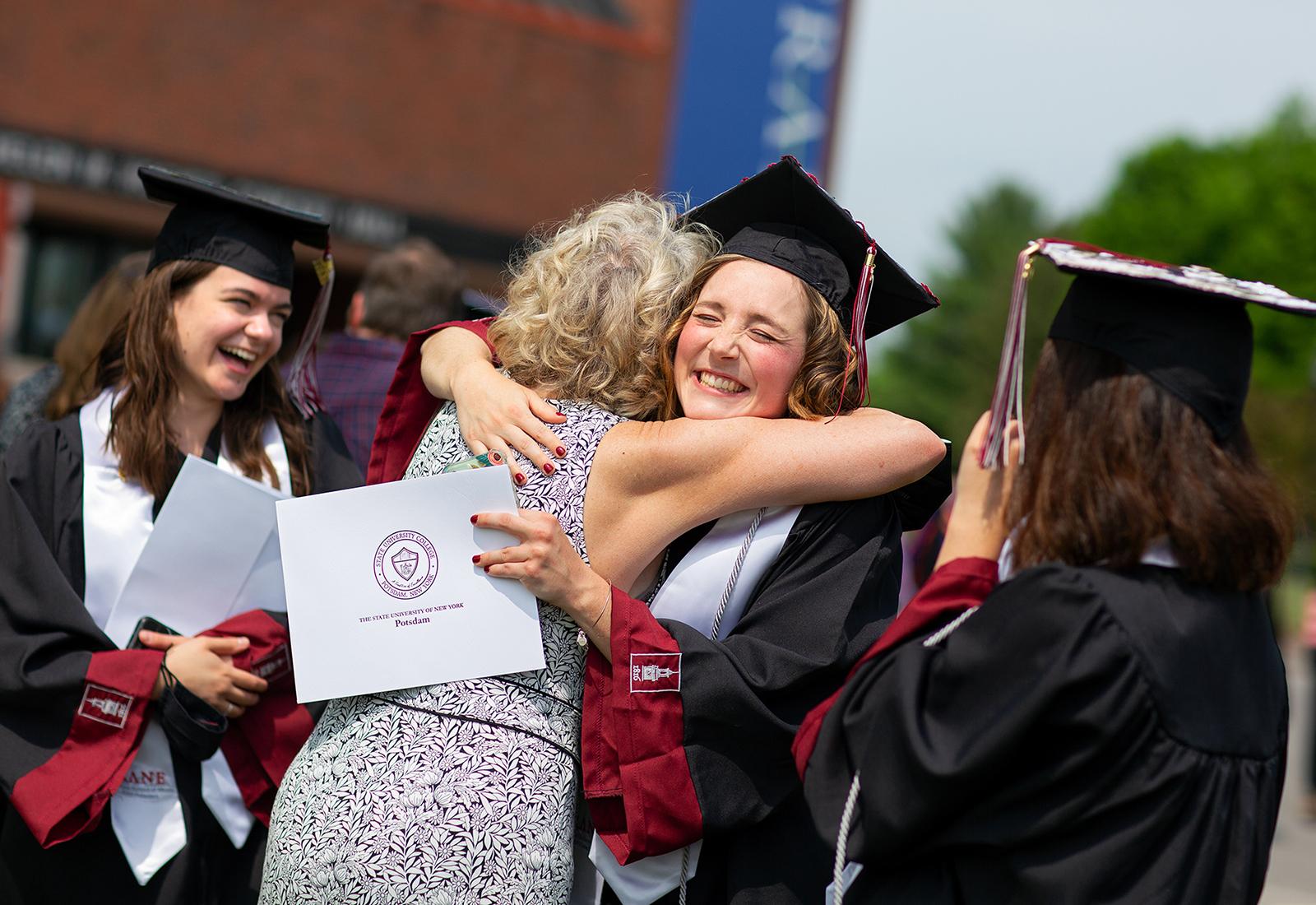 SUNY Potsdam honored its Class of 2021 graduates far and near with a series of three socially-distanced ceremonies in the Helen M. Hosmer Concert Hall at The Crane School of Music today—the first time that the hall has seen such numbers of people in more than a year. Filled (if not to capacity, in spirit at least) with graduating seniors delighted to be together for this milestone, the space resounded with song, cheers, laughter and even some tears. Hundreds of viewers took in the ceremonies virtually via YouTube.

In-person graduates were spaced out within the hall and wore their face coverings throughout. They exchanged elbow bumps with friends and professors instead of the usual hugs. Guests and those unable to make it back in person joined virtually, with a slideshow featuring graduates’ photos, degrees, honors and their words of appreciation to those who helped them reach this milestone.

Yet for all that was different this year, so much remained the same. Classmates applauded joyously as names were read out—whether students were crossing the stage or flashing across the screen. As usual, graduates had decked out their mortarboards in every design imaginable, and gleefully greeted their favorite professors and staff members waiting outdoors to cheer them on, as they processed out of the ceremony.

Tears welled in her eyes as Esterberg reflected on the recent loss of Crane School of Music Dean Dr. Lonel Woods, who passed away unexpectedly earlier this week.

“Dr. Woods put students first in everything he did, and I know that he would want us to celebrate you and all you have accomplished. He would be laughing with the joy of your Commencement, singing your achievements, and encouraging you to find celebration and hope, optimism and communion, peace and love, on this important day. And so, I will honor Dr. Woods by honoring you, the graduates, and celebrating you,” Esterberg said.

Earning her bachelor’s degree in childhood/early childhood education, Kanenishon Arquette ’21, of the Akwesasne Mohawk Nation, recited the Ohen:ton Karikwatekhwen (“The words before all else”) greeting in the Mohawk language and in English translation—a stirring reminder of the importance of Indigenous heritage in the North Country and of SUNY Potsdam’s location within traditional Mohawk territory.

Reykwaan Adorno ’21 sang a moving rendition of “Lift Every Voice and Sing,” a hymn of liberation and hope often referred to as the “Black national anthem.” Performed by fellow Crane School of Music graduates Emma Marhefka ’21 and Craig Smith ’21, the national anthems of Canada and the United States resounded through the hall.

Student Government Association President Cara Ramsaran ’21 delivered her remarks to the Class of 2021 with a prepared video address interspersed with images of campus life. The politics major spoke about the urgency to affect change, in ways large and small, even in the face of fear.

“Congratulations to the Class of 2021! You made it to graduation day despite our entire whole world going sideways. You have endured a global pandemic, social distancing and remote learning to make it here today. You have mapped out a path to graduation that was uncharted in an unsure world,” she said.

Ramsaran urged her classmates to follow the example of people past and present who have fought to make the world a better place—from the pioneering Black writer and civil rights leader Ida B. Wells, to the late Supreme Court Justice Ruth Bader Ginsburg, to climate change activist Greta Thunberg and even former SGA President Shane T. Shaul ’79.

“They all changed the world for the better. Despite all odds, they surpassed hardships to fight for what they deemed important,” Ramsaran said. “You can make change by using your college education to make the world a better place. You can change the world. So, will you? I can’t wait to find out.”

Cara Navaretta ’21 led the traditional singing of the “Alma Mater,” to close the ceremony. As graduates streamed outside, cheering faculty and staff awaited them, with more well-wishers close behind.

After earning his degree in graphic design and new media, Alexis Diaz ’21 embraced his family members as they shed tears of pride. “I’m the first in my family to graduate from college,” he explained. Around him, graduates’ friends and loved ones gathered around for photos, some with children and even a few dogs in tow, while cars driving by honked in appreciation.

As they lined up for the last ceremony of the day, classmates Evelyn Ruth Pierce Utter ’21 and Rodney Deleon ’21 had years between them and different academic interests—but they both shared an immense sense of pride for completing their degrees. Both also had family and friends watching their big moment on the livestream at home.

Utter was about to finally complete her bachelor’s degree in history after years of stops and starts. “I was originally supposed to graduate in 1991—but then life got in the way! I started again taking classes on and off to complete my degree in 2017. I finally did it,” she said.

Graduating with a dual degree in sociology and criminal justice studies, Deleon was wearing stoles representing his Dominican heritage and his status as a first generation student. “Now it’s time to figure out what the future holds,” he said.

To view the Commencement ceremony recordings and read the program, visit www.potsdam.edu/commencement.