Race to Save Threatened Turtles Continues Despite Pandemic 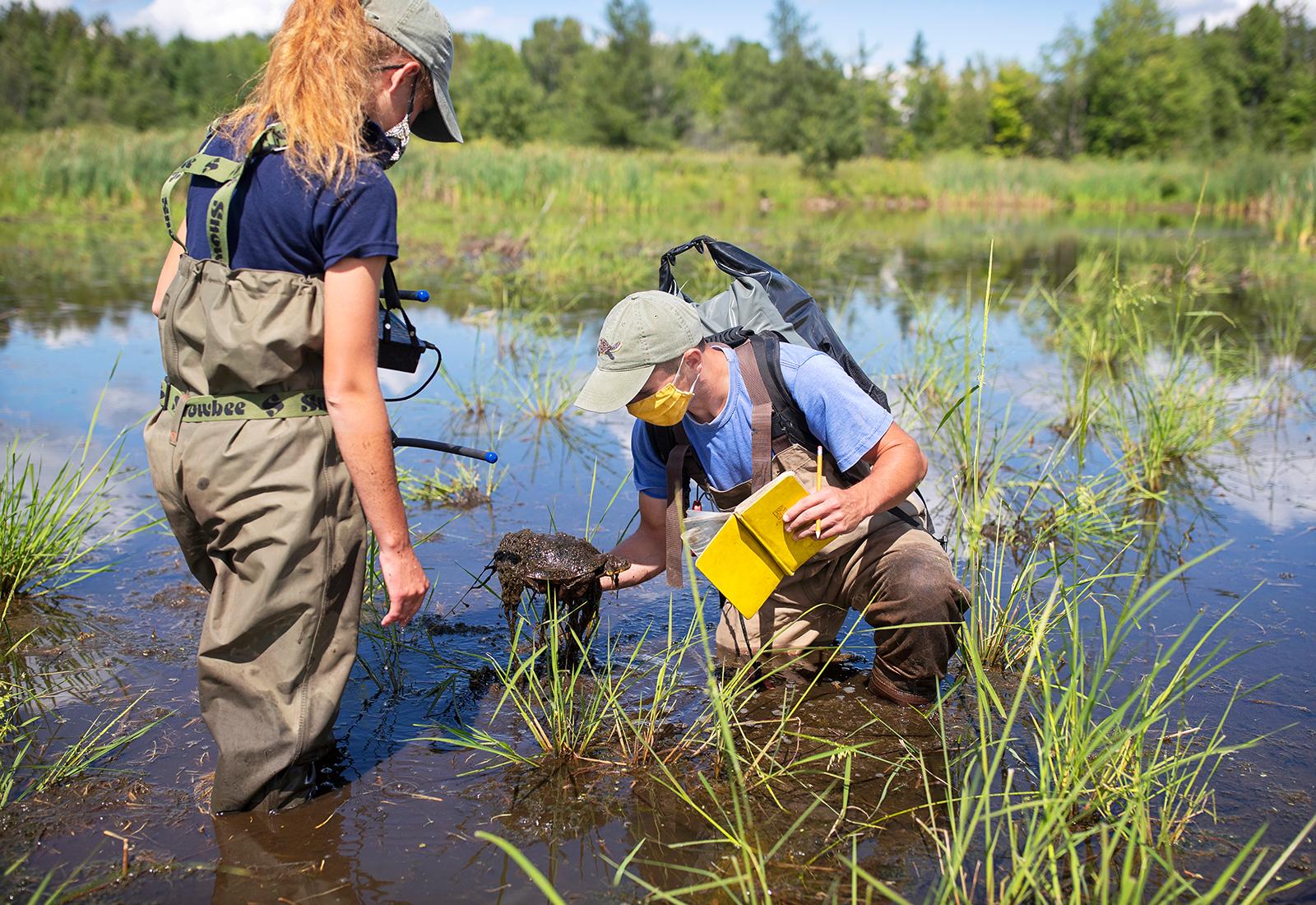 Elbow-deep in marsh water the color of coffee and texture of melted chocolate, Olivia Brown and Jase Briggs ’18 & ’19 feel for treasure. The beep of a radio receiver has narrowed the search coordinates to the thin mud around their feet, and finally Briggs pulls up the object of the hunt — a large female Blanding’s turtle, streaming with debris, but active and healthy, legs churning. 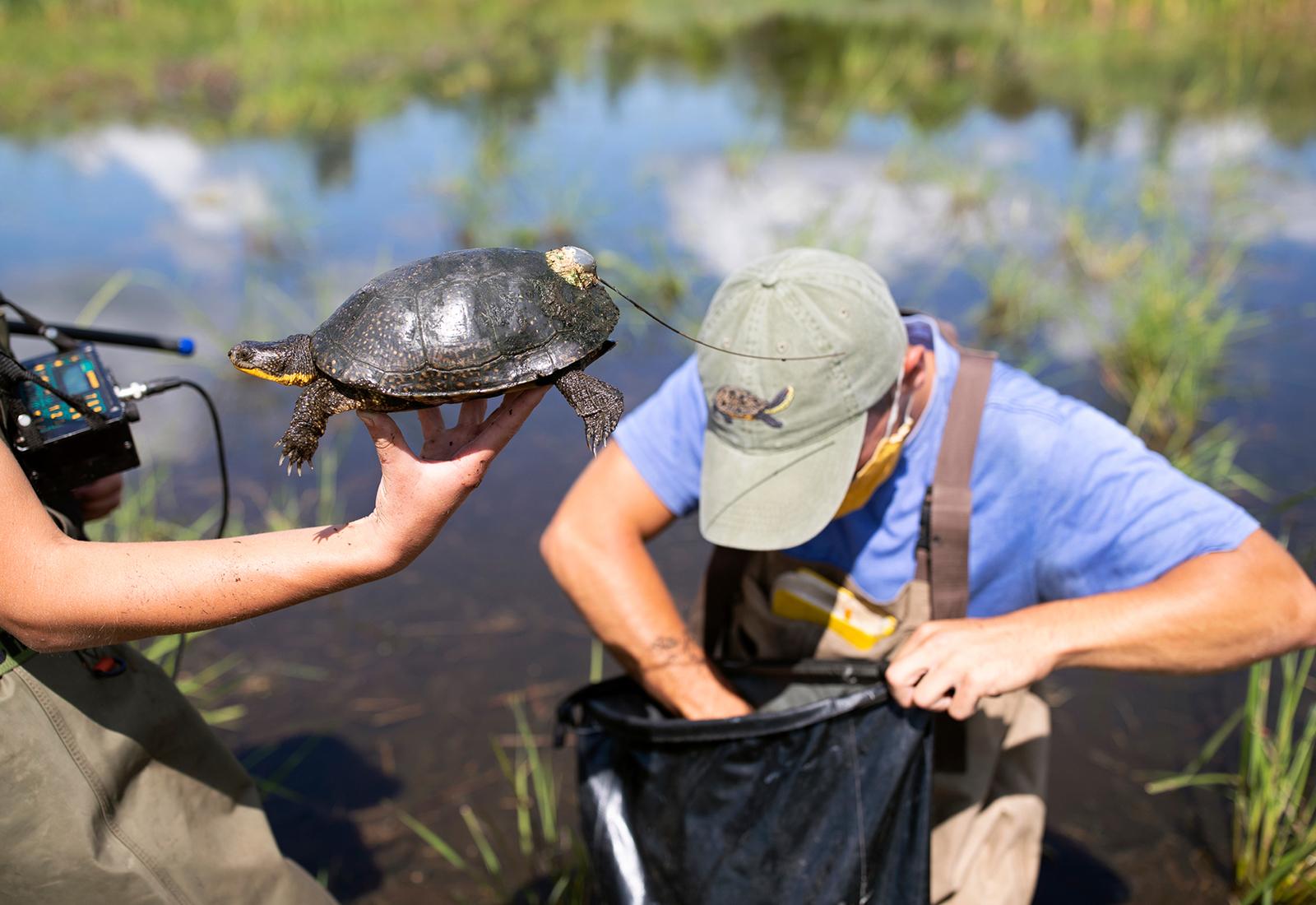 Olivia Brown holds a Blanding's turtle with a radio transmitter attached to its shell.

Briggs quickly logs the general condition and location of the turtle, checks the radio transmitter glued to its shell, then returns it to the water.

Combing a swamp with bare fingers isn’t for the squeamish — but locating and tracking rare turtles is a task that SUNY Potsdam Biology Professor Glenn Johnson and his team are happy to be able to continue as COVID-19 restrictions place many projects and other aspects of life on hold. A trajectory toward extinction doesn’t pause for a pandemic, and the Blanding’s received a rough ride from decades of industrial pollution, habitat loss, mortality from cars and increased numbers of human-subsidized predators.

This is an important time of year for the turtles, as their young begin to emerge from nests — under view of cameras in Johnson’s project areas — and offer evidence of how well restoration efforts are paying off.

Brown is a Clarkson University biology student, and Briggs graduated from SUNY Potsdam with bachelor’s degrees in biology and geographic information science. They are part of a four-person field team tasked with tracking the turtles to understand their nesting habits and general patterns. A typical day in the field can involve hours inside of sweaty chest waders, which become glued to the bottom of the marsh if their wearer stands too long in one place. Some of that legwork has recently been made easier by a drone equipped with a camera so the team can assess whether a wetland area is suitable habitat before they head in on foot.

Besides launching into swamps with radio equipment and building a drone capable of carrying telemetry equipment for remote tracking, the team also installs cameras and creates predator-proof fencing to protect the Blanding’s, 90 percent of whose nests are raided by predators like raccoons and skunks if they aren’t protected. The work takes the team into moonlit hours as they monitor turtle activity and place wire cages over the nests as soon as the female is finished laying eggs.

This fall, Johnson’s team will be busy clearing vegetation from sand dunes to open up more habitat, and moving earth to expose a substrate that’s ideal for nesting.

Johnson worried the pandemic would complicate his access to funds from a $477,326 U.S. Fish & Wildlife grant he received last winter for study of the Blanding’s and creation of habitat. Luckily that hasn’t been the case.

“If anything, the pandemic has helped move things along,” Johnson said. 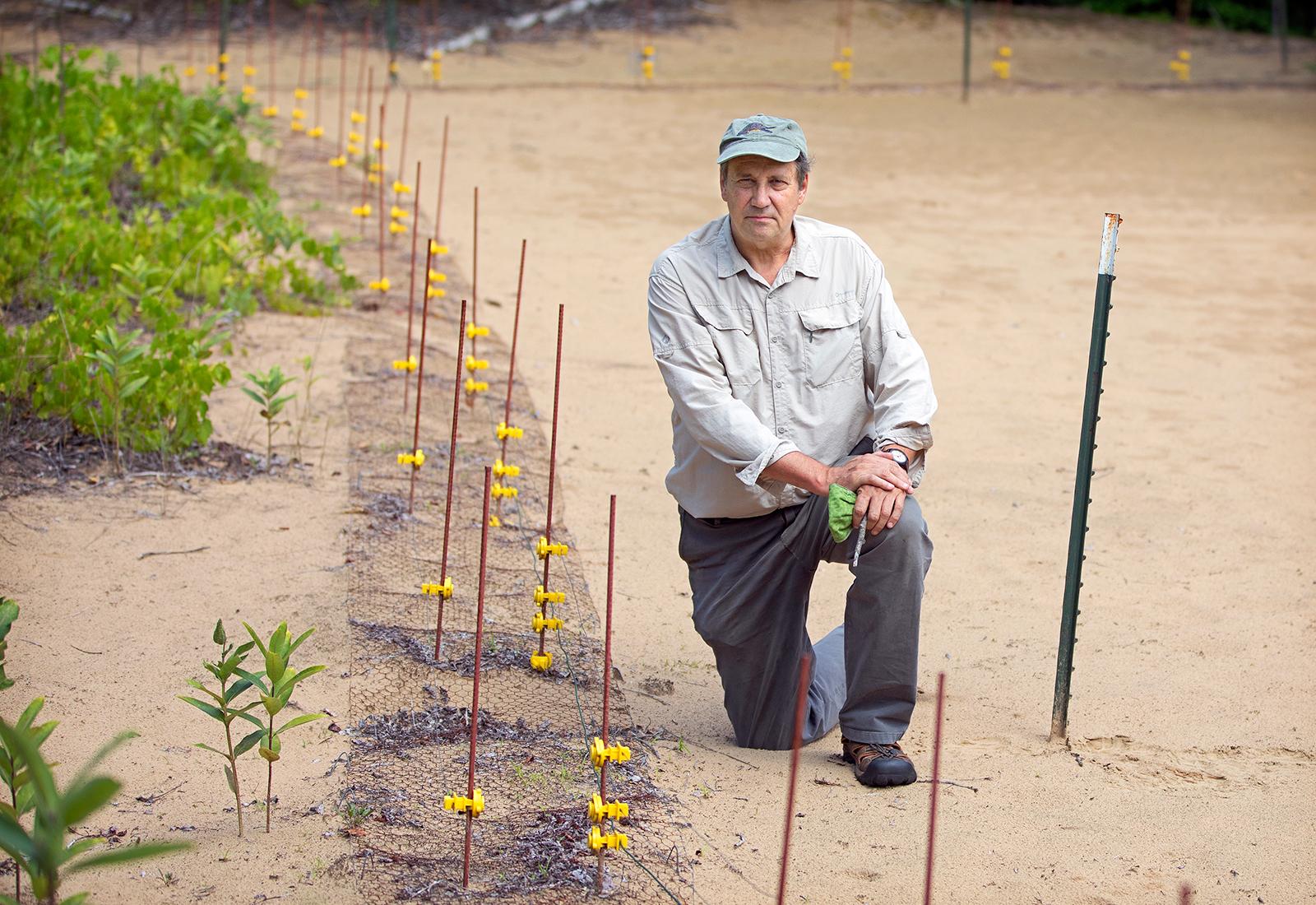 Johnson is using low electric fences to deter entry into nesting areas by predators, which tend to destroy 90 percent of turtle nesting sites. 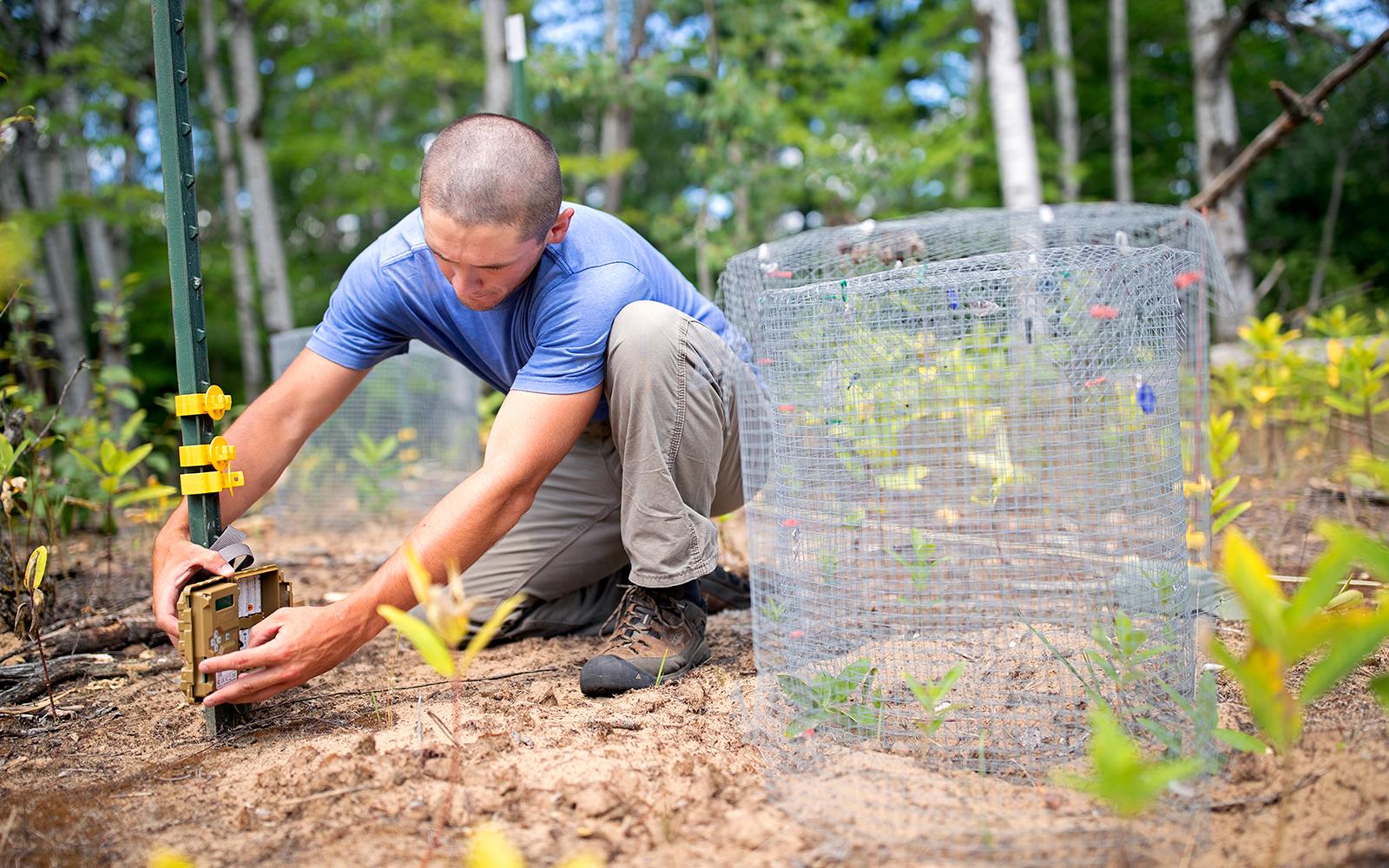 Briggs demonstrates how he collects an SD card from a remote camera setup to record Blanding's turtles in their nesting area.

The biology professor’s work in and around the Lisbon Swamp includes two nesting areas, each a half-acre in size, protected from predators with electric fencing.

“The big idea for the project is to provide high quality nesting opportunities for turtles in the North Country, as alternatives to low quality nesting habitat such as agricultural fields,” Johnson said.  “If they’re situated carefully, these areas will also reduce the need to cross roads, a very risky activity for a slow-moving turtle.”

The Lisbon Swamp location, with 17 known and tracked turtles, is the most important of four sites near Canton, Lisbon, Louisville and Massena where restorative work is ongoing. Johnson said the Lisbon site is probably the most important in New York due its natural state, existing turtles populations, sandy soils and proximity to wetlands.

The North Country has some of the largest remaining populations of the Blanding’s in the Northeast. The turtles aren’t generally wide-ranging but they do travel overland, which puts them in danger.

“We had one turtle walk two miles from where we found it,” Briggs said. “They can range anywhere from 400 meters to two miles from their wetland to nest.”

The restoration projects also benefit other nesters like the wood, map, painted and snapping turtles. Funded by the federal Natural Resource Damage Assessment and Restoration Program, the initiative is set to continue into spring of 2023, in a collaboration with the New York State Department of Environmental Conservation and one of its wildlife biologists, Angelena Ross ’02, a SUNY Potsdam alumna and adjunct faculty member.

The habitat projects complement an initiative Johnson launched six years ago to post turtle crossing signs along county and town roads. Besides alerting drivers to the presence of nesting turtles, the signs raise awareness that time is of the essence in bringing populations back to sustainable thresholds.

“One of the key findings from the first decade of my research on Blanding's turtles in the North Country is that there were very few young ones,” Johnson said. “They can live such long lives, up to 80-plus years. But if there's no recruitment, then we may have what my friend Russ Burke — a turtle biologist at Hofstra University — calls a zombie population...the living dead.” 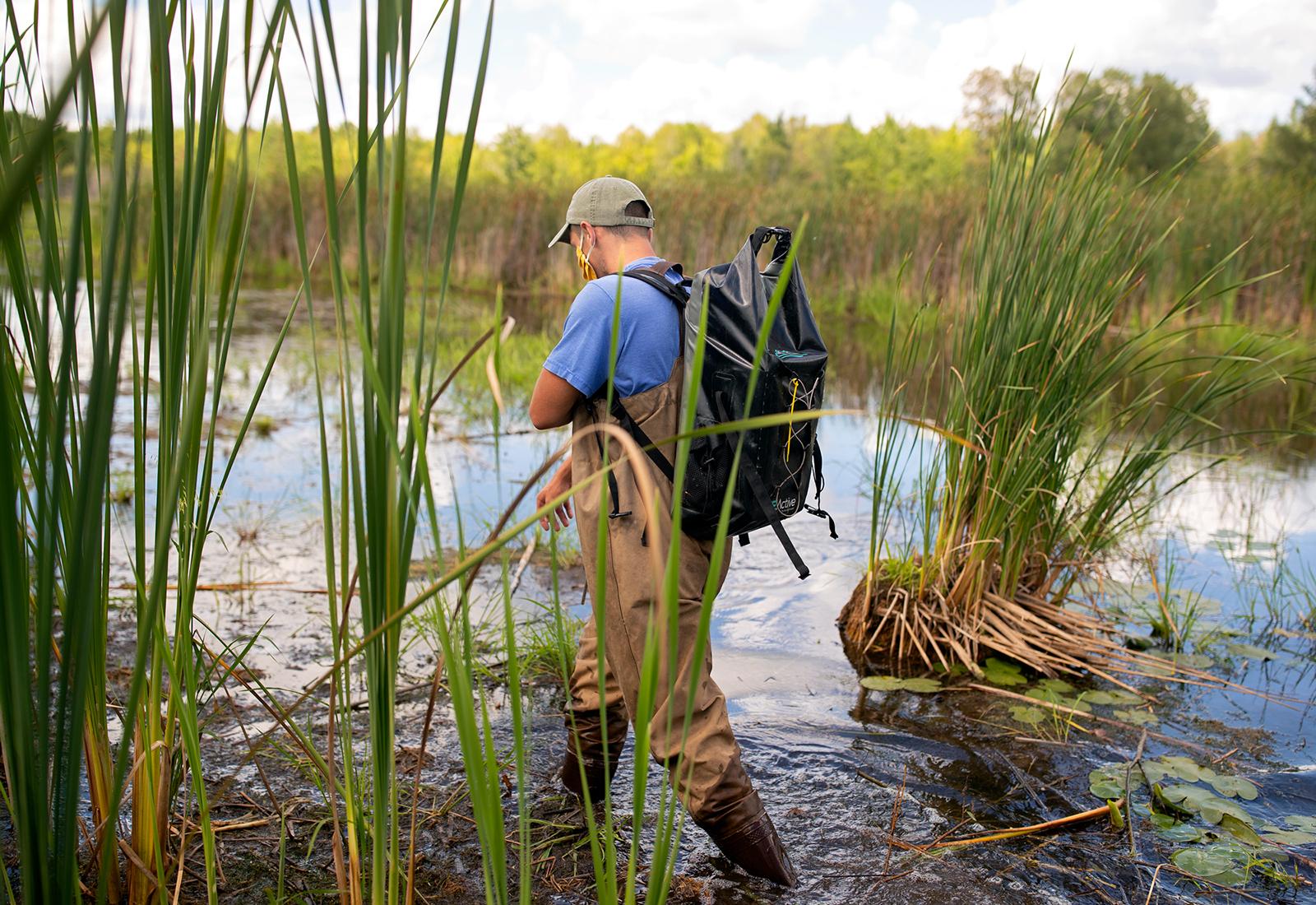 Briggs '18 walks through a swamp in Lisbon, N.Y., while tracking a Blanding's turtle.

SUNY Potsdam’s Department of Biology is grounded in the principle that every student should receive a quality education fitting their interests. Undergraduate research is embraced, with opportunities for hands-on learning in the fields of ecology, evolutionary biology, cell and molecular biology, environmental science, and anatomy and physiology. The department also operates the Wagner Institute for Sustainability and Ecological Research. For more information, visit www.potsdam.edu/academics/AAS/biology.