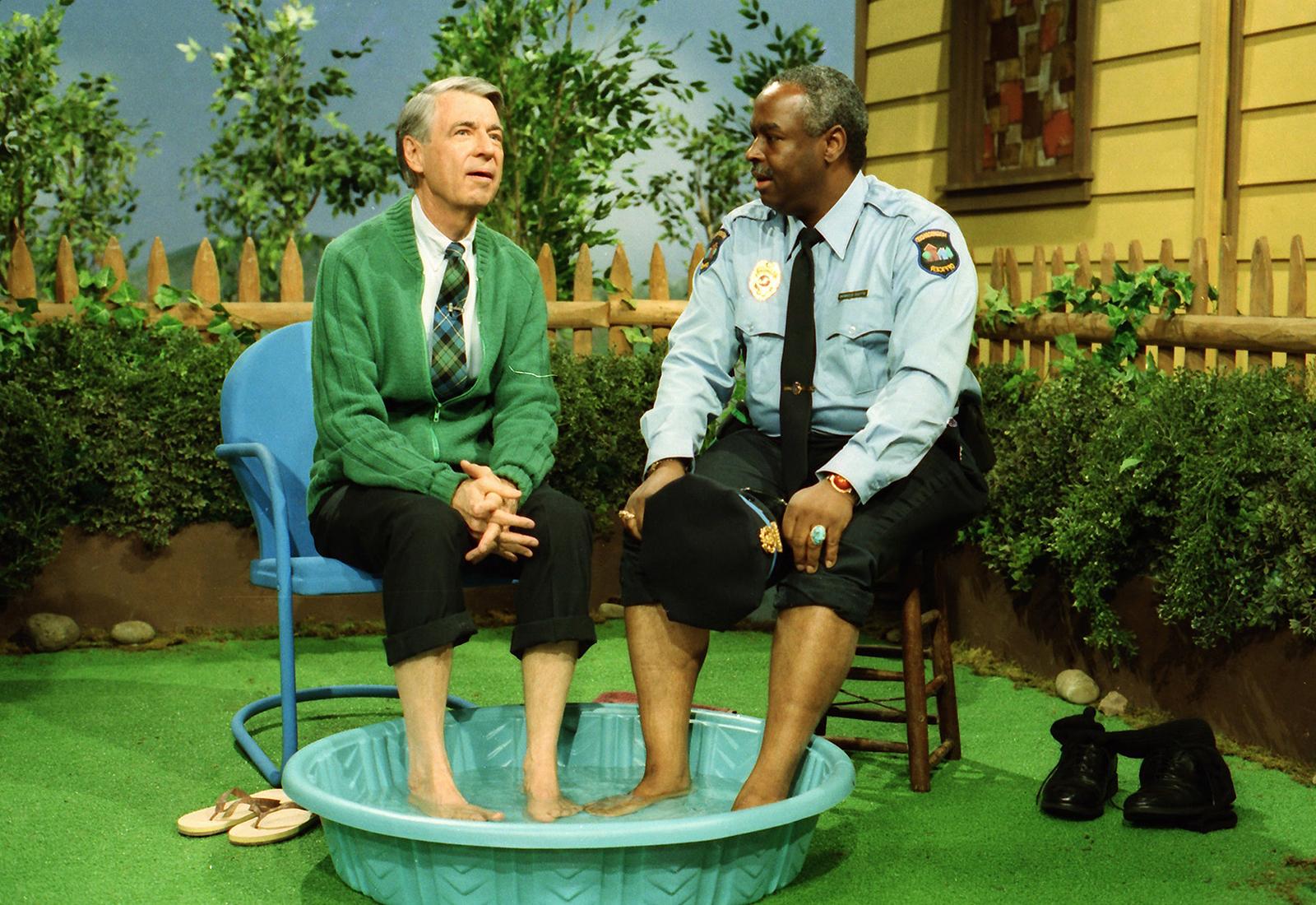 In this groundbreaking 1969 scene from “Mister Rogers’ Neighborhood,” Officer Clemmons (played by François Scarborough Clemmons) cools off by washing his feet in a wading pool with Mister Rogers.

SUNY Potsdam’s Crane School of Music will welcome the storyteller, artist and educator Dr. François Scarborough Clemmons for a campus residency this week. World renowned for his groundbreaking role as Officer Clemmons on “Mister Rogers’ Neighborhood,” the visiting artist will share his insights with students, faculty, music educators and the general public on Thursday and Friday, Oct. 14 and 15.

Throughout the course of his remarkable life, Clemmons has touched the hearts of thousands—first as an opera singer, then in a trailblazing role on “Mister Rogers’ Neighborhood,” and later as an award-winning conductor, performer and educator. Clemmons’ visit has been made possible by the Joy Anthony Douglass Visiting Master Teacher Program.

On Thursday, Oct. 14, Clemmons will present a keynote address, “Won’t YOU Be My Neighbor?” at 8 p.m. in the Sara M. Snell Music Theater, moderated by Dr. Andrea Maas and Dr. William L. Lake Jr. The keynote address will stream live online at the same time. To find the YouTube link, visit http://www.potsdam.edu/cranelive.

On Friday, Oct. 15, he will lead two Q&A sessions and interactive workshops discussing the intersection of race and culture in music education. The workshops will be held at 9:30 a.m. in Schuette Hall Room A323, and then at 11:30 a.m. in the Performing Arts Center Lobby. There will be an open rehearsal and masterclass on the Negro spiritual with the Hosmer Choir and Eclectic Ensemble at 3 p.m. in the Helen M. Hosmer Concert Hall.

All of these events are free, and the public is invited to attend. In addition to these public events, Clemmons will attend an open rehearsal of the Phoenix Club during his visit and join a social gathering for the Crane School of Music Black, Indigenous, People of Color (BIPOC) Affinity Circle. 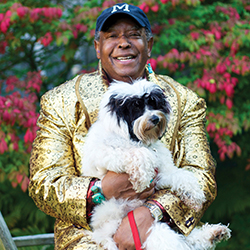 About the guest artist:

When he earned the role as Officer Clemmons on the award-winning television series, “Mister Rogers’ Neighborhood,” François Scarborough Clemmons made history as the first African-American actor to have a recurring role on a children’s program. A new, wide world opened for him—but one that also required him to make painful personal choices and sacrifices.

From New York to Russia, Berlin to California, Clemmons has performed for audiences around the world and remains a beloved figure, bringing joy to millions of adults and children, across generations and borders. His book, “Officer Clemmons: A Memoir,” details his incredible life story, beginning with his early years in Alabama and Ohio, marked by family trauma and loss, through his studies as a music major at Oberlin College, where Clemmons began to investigate and embrace his homosexuality, to a chance encounter with Fred Rogers that changed the whole course of both men’s lives, leading to a deep, spiritual friendship and mentorship spanning nearly 40 years.

Clemmons’ background is in vocal performance, having won the Metropolitan Opera National Auditions in Pittsburgh, and winning a position in the Met studio. He sang professionally with the Met for seven seasons in more than 70 roles, and won a Grammy Award for Best Opera Recording as part of the cast of the Cleveland Orchestra and Chorus recording of George Gershwin’s “Porgy and Bess.” Following his opera career, he had the opportunity to join “Mister Rogers’ Neighborhood,” and created the role of Officer Clemmons, the friendly local police officer in the “Neighborhood of Make-Believe.” In the role, he acted in the barrier-breaking scene in which Mister Rogers invites Clemmons to soak his feet in the wading pool together on a hot day—sending a powerful message of inclusion at a time when there was civil unrest over pool segregation policies across the U.S.

In 1986, Clemmons founded the Harlem Spiritual Ensemble, a group devoted to the preservation and performance of American Negro spirituals. From 1997 until his retirement in 2013, he was the Alexander Twilight Artist in Residence and director of the Martin Luther King Spiritual Choir at Middlebury College. He continues to live and work in Vermont. In addition to his memoir, he has authored a series of children’s stories titled “Little ButterCup and the Majic Cane,” and a volume of poetry, “A Place of My Own.” Clemmons has also published a volume of choral arrangements of spirituals titled “Songs for Today,” and composed a stage musical, “My Name is Hayes,” based on the life of the great tenor Roland Hayes. To learn more, visit www.francoisclemmons.net.

The Joy Douglass Visiting Master Teacher Program was established by Joy Anthony Douglass ’56 to honor the transformative opportunities she had working with visiting master teachers during her time at The Crane School of Music. The fund allows visiting master teachers to share their insights and expertise with Crane students, faculty and music educators from the surrounding region. For the full schedule of events and more information, visit https://cranemusiceducation.wordpress.com/.