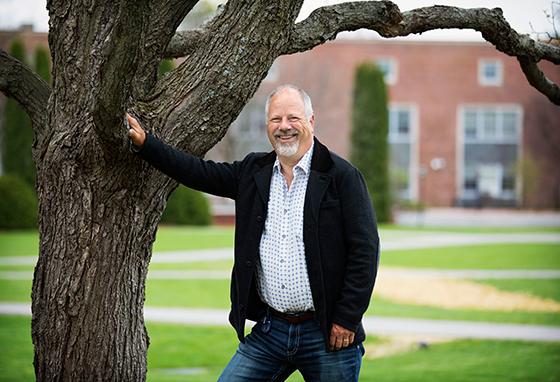 As one of the newest members of the Potsdam College Foundation Board of Trustees, retired tech CEO Ronald Fishbeck ’80 is already making great strides to build a bright future for SUNY Potsdam and its students.

The trustee and his wife, Teresa, recently established their second scholarship at the College, providing significant support to undergraduates with promising futures in the arts and sciences.

The newly established Fishbeck Foundation Scholarship aims to provide significant financial assistance toward the cost of attendance (approximately the full cost of tuition and fees) to outstanding SUNY Potsdam students preparing for a career in the arts or the sciences. This new fund provides one of the largest single undergraduate scholarship awards offered by the Potsdam College Foundation.

“We hope to help students who might not have the financial wherewithal to be able to come to Potsdam, to give them an opportunity to do just that,” Ron Fishbeck said.

This endowment, totaling half a million dollars, will support four SUNY Potsdam students a year when it is fully implemented. The award amount for each student will be $8,000, which almost fully covers the cost of tuition and fees for in-state students, or goes a long way toward supporting room and board costs for students whose tuition is funded through other programs.

The Fishbeck Foundation Scholarship will be awarded each year to a rising sophomore who shows great promise of being successful in his or her chosen field, and who is majoring in one of 15 eligible majors, including: art education, art history, studio art, dance, graphic design and new media, theatre, theatre education, visual arts, computer science, mathematics, biochemistry, biology, chemistry, geology and physics. The scholarship is renewable, so recipients will be able to receive the support for their sophomore, junior and senior years at SUNY Potsdam, as long as they maintain eligibility.

The first recipient of the Fishbeck Foundation Scholarship is Zoe Loveless of Hannawa Falls, N.Y.

This is the Fishbecks’ second scholarship at SUNY Potsdam. They established the Ronald and Teresa Fishbeck Computer Science Scholarship in 2012, which supports computer science students who are completing internships in their field.

SUNY Potsdam awards more than $3 million worth of scholarships annually, half of which is funded by philanthropic support from alumni and friends, through scholarships provided and/or endowed by the Potsdam College Foundation.

Ron and Teresa Fishbeck met at SUNY Potsdam in 1979, when they were both students—he majored in computer science, while she was studying art. After Ron graduated in 1980, the couple moved to Northern Virginia, as he began his career with the Computer Sciences Corp., working on anti-submarine warfare systems, combat control systems and satellite communication networks. In 1985, Ron joined Presearch Inc., to develop a software engineering competency for the company. A year later, the couple and their two young children relocated to Syracuse, N.Y., where Teresa earned her degree in interior design at Onondaga Community College.

In 1990, Ron and a business partner established a computer services company called Systems Made Simple, headquartered in McLean, Va. As CEO of the $350 million company, Ron and his executive management team were successful in guiding the firm to achieve recognition in the Inc. 500/5000 list of Fastest Growing Privately Held Companies, beginning in 2009. Systems Made Simple became one of the largest contractors to service the U.S. Department of Veterans Affairs.

Now retired, Ron and Teresa live in Aroda, Va., near their two grown children, Jonathan and Nicole, and three grandchildren.

To read a recent interview with Ron, visit http://www.potsdam.edu/alumni/spotlight/fishbeck.

Established in 1968, the Potsdam College Foundation is a non-profit corporation dedicated to stewarding the continued growth of private giving in support of SUNY Potsdam. Its mission is to ensure a quality future for the College and its people, by establishing endowments to support scholarships and programs to ensure campus needs are met. To learn more, visit www.potsdam.edu/giving/pcf.