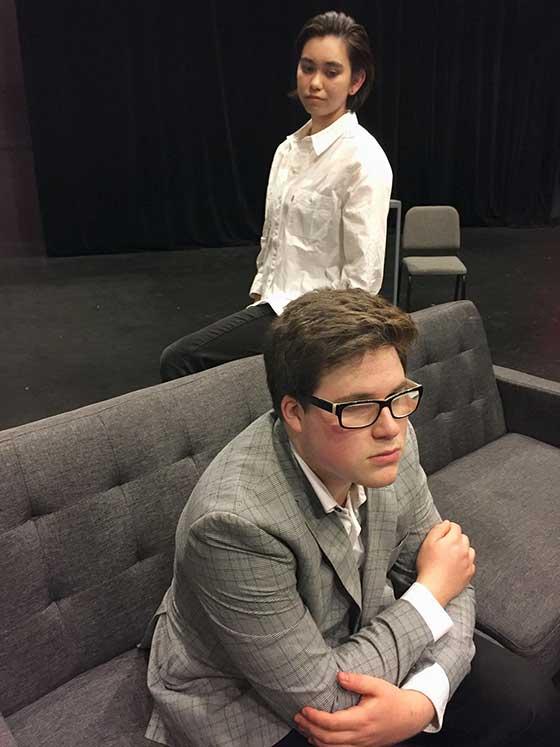 The Department of Theatre and Dance at SUNY Potsdam will present its annual Festival of One-Act Plays from April 18-23, 2017 in the Performing Arts Center’s Black Box Theater.

The annual Festival of One-Act Plays is one of the highlights of the season for the Department of Theatre and Dance. The student-selected plays are directed and produced by six upperclassmen currently enrolled in the Directing 2 class. The festival involves participation from over 50 cast and crew members.

Tickets are free and available at the theater door one hour before the performance begins; seats are not reserved. Doors open at 7 p.m. each evening. Please note, that “When the Night Has Come” involves mature themes and language.

While admission is free, donations are being collected to benefit Futures Without Violence, a non-profit organization aimed at empowering individuals and organizations working to end violence against women and children around the world. For more information contact Rivka Rocchio, at rocchisr@potsdam.edu or the department of Theatre and Dance at 315-267-2556.

“When the Night Has Come” – Stewart is driven to a suicidal state by the thought of his partner, Tom, not coming back to him after he is done with his current boyfriend. The play is written by Stefan Brundage and directed by Anthony Ward.

“Feiffer's People” – A show where political cartoons come to life. Exploring issues of sexism, protest, and the relationships between men and women all in a satirical light. The play is written by Jules Fieffer and directed by Ryan Tracy.

“A Number” – A father is confronted by three sons, two of whom are clones of the first, in this unsettling psychological thriller exploring family, identity, morality and guilt. Gender does not play a role in casting. The play is written by Caryl Churchill and directed by James Gillick.

“Math for Actors” – Kate, a studious math tutor agrees to tutor arrogant thespian, Keith. Will these polar opposites find a common denominator? The play is written by Emily C.A. Snyder and directed by Hannah Merrell.

“It's Not You, It’s Me” – In this fast-paced comedy featuring five increasingly bizarre break-up scenes from couples of all genders, the play explores the most awkward break-ups through the over-exaggeration of some surprisingly realistic and relatable characters. The play is written by Don Zolidis and directed by Reese Reed.

“Auditioners” – The audition was supposed to be simple: prepare one classical monologue and one contemporary monologue. But when this challenge is taken up by a beauty queen, a stand-up comic, a slam poet, an Esperanto-speaking mime and a parade of other crazies,  the director faces some difficult choices. The play is written by Douglas Rand and directed by Evan Lashbrooks.

Founded in 1816, The State University of New York at Potsdam is one of only three arts campuses in the entire SUNY system. SUNY Potsdam’s arts curriculum offers the full palette: music, theatre, dance, fine arts and creative writing. No matter the discipline, people from all backgrounds can find their creative compass at Potsdam, with myriad arts immersion experiences available for both campus and community.