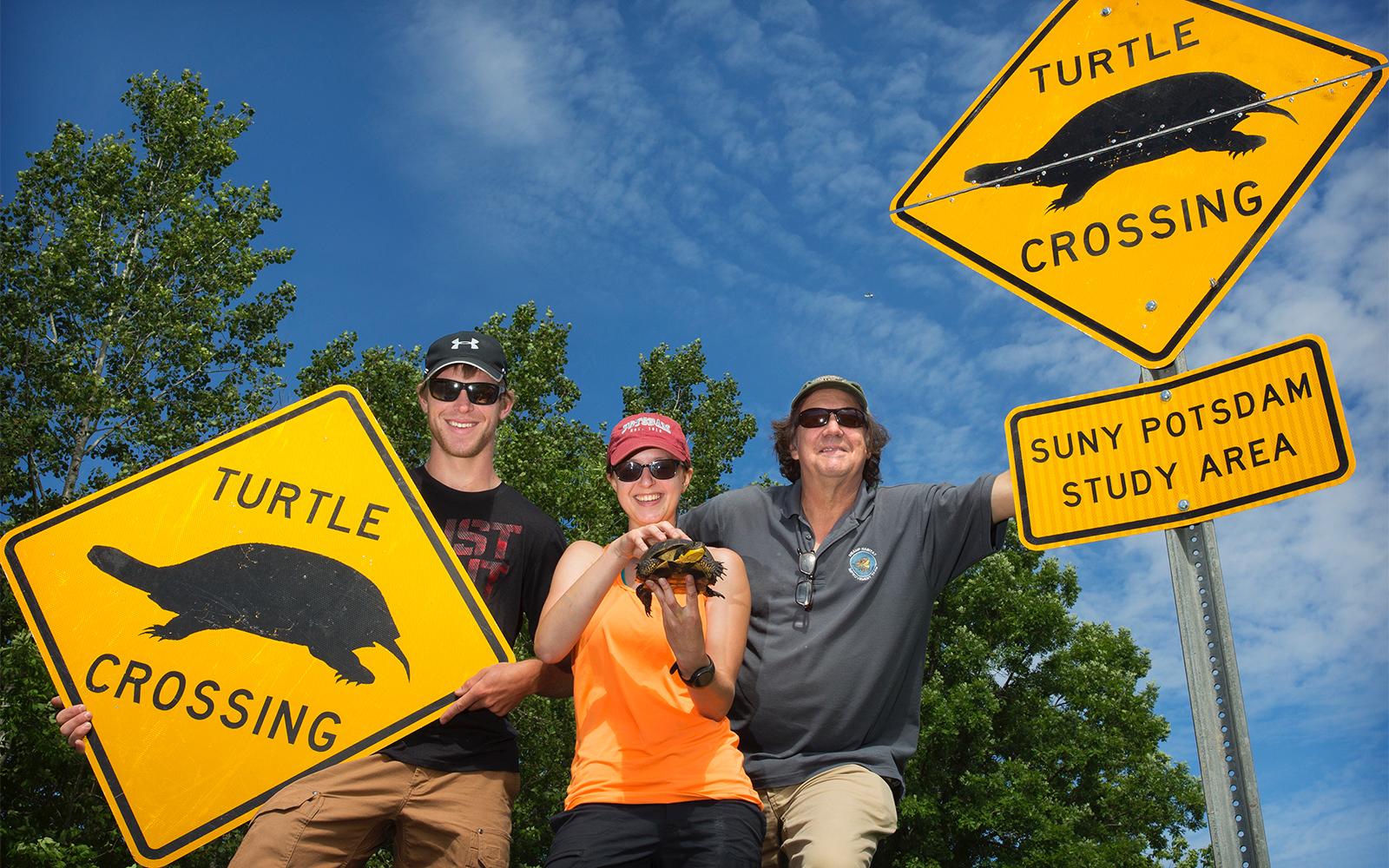 SUNY Potsdam Professor Dr. Glenn Johnson (right) has been awarded a $477,326 grant by the U.S. Fish and Wildlife Service to protect threatened turtle species at four sites in the North Country.

Rare North Country turtles will have a chance to nest in peace, thanks to a new grant to help a SUNY Potsdam professor and his students create safe havens at four sites in St. Lawrence County.

Biology Professor Glenn Johnson has been awarded $477,326 by the U.S. Fish and Wildlife Service to create and enhance nesting habitat for the Blanding’s turtle, a New York State threatened species. The more common wood turtles, map turtles, painted and snapping turtles are also expected to benefit from the initiative to create open, sandy areas protected by electric fences.

The projects on four sites near Canton, Lisbon, Louisville and Massena will take the dual approach of giving the turtles an alternative to nesting in corn fields, while also fencing out predatory racoons and skunks. The initiative will encompass a minimum of four acres divided evenly between public and private land sites.

“The other big issue besides turtles crossing roads to get to nesting sites is that 90 percent of nests get dug up by human-subsidized nest predators,” said Johnson. “We will be setting up wildlife cameras to monitor the electric fence to see if it is being breached by these predators and if it is doing a good job of keeping them out.”

SUNY Potsdam students will be involved in trapping and tracking turtles, doing habitat assessments and nest surveys, setting up fences and cameras, and analyzing data. Trapped turtles will be fitted with radio transmitters and GPS trackers to determine their preferred nesting areas. Nearby females will then be moved into project sites just prior to nesting, an approach that has been successful with wood turtles and Blanding’s turtles in Massachusetts.

The initiative, set to continue into spring of 2023, is a collaboration with the New York State Department of Environmental Conservation and one of its wildlife biologists, Angelena Ross ’02, a SUNY Potsdam alumna and current adjunct faculty member. In addition to providing technical expertise on turtle habitat, she will handle regulatory aspects of the project, including wetland and archaeological concerns.

Turtles nest in sandy substrates and their eggs are allowed to be incubated by the sun. Females provide no additional parental care other than good site selection.  Keeping areas open and free of predators allows the developing turtle eggs to experience a temperature balance critical to development. Turtles often select corn fields that seem like good nesting areas, but once the corn grows, the shade increases mortality by slowing embryonic development. The sudden addition of shade can also upset the temperature balance that determines whether the young form into males or females — more bad news for the Blanding’s turtle, which is considered at risk of extinction.

The North Country has some of the species’ largest remaining populations in the Northeast, but even here its numbers were reduced by past environmental contamination from large industries, loss of wetland habitat and increasing mortality by vehicles, Johnson said.

The nesting habitat project follows on an initiative Johnson launched three years ago to post turtle crossing signs along county and town roads alerting drivers to turtle presence at key nesting areas. The signs will appear again this year around nesting season, which runs between late May and early July.

SUNY Potsdam’s Department of Biology is grounded in the principle that every student should receive a quality education fitting their interests. Undergraduate research is embraced, with opportunities for hands-on learning in the fields of ecology, evolutionary biology, cell and molecular biology, environmental science, and anatomy and physiology. The department also operates the Wagner Institute for Sustainability and Ecological Research. For more information, visit https://www.potsdam.edu/academics/AAS/biology.