A thirst for global exploration and examining different cultures has guided Simisola Macaulay ’23 since her youth—ultimately leading her to SUNY Potsdam, where she’s pursuing a double major in anthropology and international studies with a minor in Africana studies.

A first-generation American whose parents emigrated from Nigeria, Macaulay has always had strong ties to Africa. The SUNY Potsdam senior speaks five languages—French, Swahili, Yoruba, Arabic and English—and has traveled to more than 10 countries. “My family is full of diplomats and people who travel. My uncle worked for the president of Nigeria at one point. Some of my uncles are governors in Nigeria, some of them work in the Nigerian embassy in the U.K., U.S., and in East Africa,” she said.

Encouraged by her family to follow in their footsteps of government service, Macaulay discovered a different way to interact with the world when she transferred to SUNY Potsdam in 2021. As she learns about policy and international relations through the Department of Politics, she is also exploring the cultural practices and linguistic nuances of people around the globe through the Department of Anthropology.

During her first semester on campus, she formed a connection with Kathryn Allen, a visiting professor of anthropology. “She was really welcoming, and the department is very willing to hear out your ideas and talk to you. I can have a casual conversation with any one of my professors at any time, and it doesn’t feel like I’m getting a lecture or that I’m beneath them. They’re like a family. We joke in our anthropology club that Dr. Hadley Kruczek-Aaron is our mom and Dr. Nasser Malit and Dr. Morgan Perkins are the cool uncles. We have a family tree for the department, we’re one big family,” she said.

Macaulay has continued to personalize her educational experience, tying it back to her family and African heritage. Most recently, in the summer of 2022, she spent three weeks in Tanzania where she conducted research on the maternal practices of women in the Maasai tribe. The topic hit home for Macaulay whose grandmother was a traditional midwife in Nigeria. “My great-grandmother trained her with that knowledge, so I’m interested in those practices amongst tribes in West and East Africa and looking at similarities and differences,” she said.

Macaulay visited a Massai Boma, a family compound consisting of a series of huts for women married to the same man, and interviewed one woman at a naming ceremony who had recently given birth. “It was interesting watching their ceremonies. As Nigerians, we have naming ceremonies, and the baby is out of the house after a week, but for the Maasai, it’s six months because they’re nomadic people, and they can’t risk the one-month-old being exposed to a sandstorm. Even when we were in the Serengeti, we saw Maasai who were moving across dry and arid areas, and a one-month-old would not be able to handle that,” she explained.

When she returned to SUNY Potsdam for the fall semester, Macaulay wrote a research paper on the experience and presented her findings to Dr. Malit as part of her senior seminar capstone project. “He’s Kenyan, which is right next to Tanzania, so it was easy because he knew the area. We were talking about how his tribe normally does maternal practices as well and about the different practices amongst East African tribes,” she said.

Now in her final semester on campus, she remains extremely active as the president of the anthropology clubs, a student ambassador for Admissions where she leads tours of campus for prospective students, and as a student ambassador for Advancement where she connects with alumni and donors. She also works as a peer study abroad counselor in the Lougheed Center for Applied Learning, taking on the role of a travel agent for her classmates. “I help them find programs that match their major and I look at what they have left to do for courses. I help them with their applications, and help them apply for scholarships. It’s all related to anthropology, so I’m feeding four birds with one scone,” she said.

Macaulay leads prospective students and their families around campus during the fall Open House events.

“I like how nice and welcoming the teachers are at SUNY Potsdam. I go home and I’m like, ‘let me go back to Potsdam as soon as possible.” 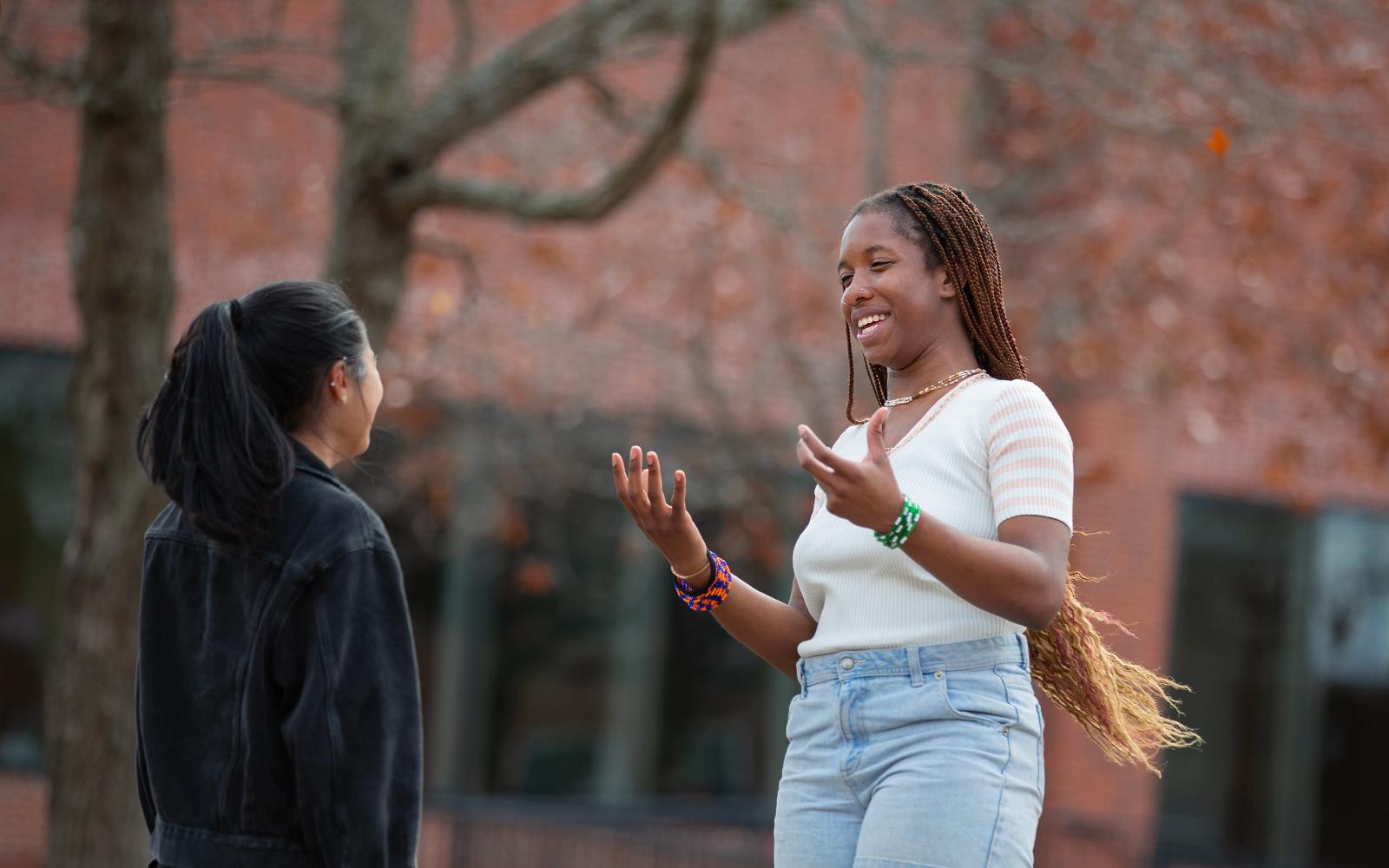 In the spring of 2022, Macaulay led a TEDx Talk on gender expression within the Yoruba community in Nigeria, her family’s tribe, a group that doesn’t use gender specific pronouns. She presented “Struggle for gendered language as a Nigerian-American” on stage at SUNY Potsdam’s Proscenium Theater. “In preparation, I was having discussions with family members and my mom is part of a Yoruba cultural organization, so I was asking them their opinions. If you talk to my dad, sometimes he refers to me as ‘he’ or his ‘son,’” she said. “For West African languages, it’s a thing. If they’re talking about James Brown, they’ll say, ‘She’s a beautiful singer.’ It’s just something I was used to, but I didn’t really know the reason behind it.”

Macaulay is now getting ready for a much longer trip to Africa. Following a two-week language intensive course in France, she will be visiting her extended family in Nigeria. “I haven’t been there since 2016, which was for my grandmother’s 70th birthday party at the time. I’m going back because I haven’t been there as an adult, and I want to pay my respects to both grandmothers who passed shortly after I left. There’s a lot of family that hasn’t seen me in five years. I’m also going back because of my anthropology degree. I’m planning on being an Africanist, and one of the countries I’m studying is Nigeria and my tribe,” she said.

From Nigeria, she will travel to the east coast of Africa for a semester-long internship in Tanzania. Taking the skills from her anthropology and international studies classes, she will be working for the United African Alliance—a community center run by two former Black Panther members, Charlotte O'Neal and Baba Pete, who she met during her last trip to Tanzania. “I’m going to be doing archival work and an oral history project with them. There was a documentary made about them in 2003, but even when Baba was showing it to us, he was pausing it and saying, ‘This has changed, this isn’t true.’ So, I’m going to be doing an oral history to let them tell their story from this point in their life,” she said.

Macaulay was also awarded the U.S. Department of State's Gilman Scholarship for the internship in Tanzania, of which only the top 15% of the more than 12,000 applicants receive funding each year. The internship will round out her degree at SUNY Potsdam as she prepares for graduate school. She’s currently applying for Ph.D. track programs in anthropology at UCLA, UC Berkeley, Cambridge, St. Andrews, Edinburgh, and Manchester, with plans to expand on her research in Africa, centered around the cultural heritage of her family.

“I’m looking to get my Ph.D. and continue to do research and teach,” she said. “My mom also founded an organization to honor my grandma when she passed, so I’m excited to get involved with that and introduce people to anthropology back home.”