A New Lease on Life

Mirroring the frenetic pace of her own life as a paramedic over the past decade, Laura Schappert ’08 & ’22 monitors honeybees frantically producing honey in the hive. The feisty pollinators evoke a feeling from her former career as a paramedic, rushing from one emergency to the next in the back of an ambulance—a profession she is now eager to leave behind as she pursues a degree in biology at SUNY Potsdam.

Her career in emergency medicine started back in 2005 while working on a degree in studio art at SUNY Potsdam. Schappert had joined the Campus Rescue Squad, completed her Emergency Medical Technician training, and she was responsible for responding to medical and traumatic emergencies around campus and at sporting events. After graduating in 2008, she spent more than a decade working as an EMT and paramedic for Hudson Valley Paramedic Services, NDP EMS, and MobileLife Support Services.

In 2020, at the height of the global pandemic, Schappert decided to make a change. Leaving behind her career as a paramedic, she enrolled at SUNY Potsdam to focus on biology. “I really enjoyed being at Potsdam, so I came back. The faculty and staff are great, and the area is beautiful,” she said.

Schappert had also completed an associate degree at Ulster Community College two years earlier, fulfilling most of her lower division science courses, and that coupled with her previously completed general education requirements from her first degree at SUNY Potsdam, has put her on the fast track to graduate in 2022. With most of her classes online during her first semester due to the global pandemic, she is now fully immersed on campus, taking on applied learning opportunities at the College. Her projects this summer range from research on the invasive purple loosestrife, caring for the animals at Stowell Hall, and working as a beekeeper at Cecilie Garden—the latter of which has proven to be her most significant undertaking to date. 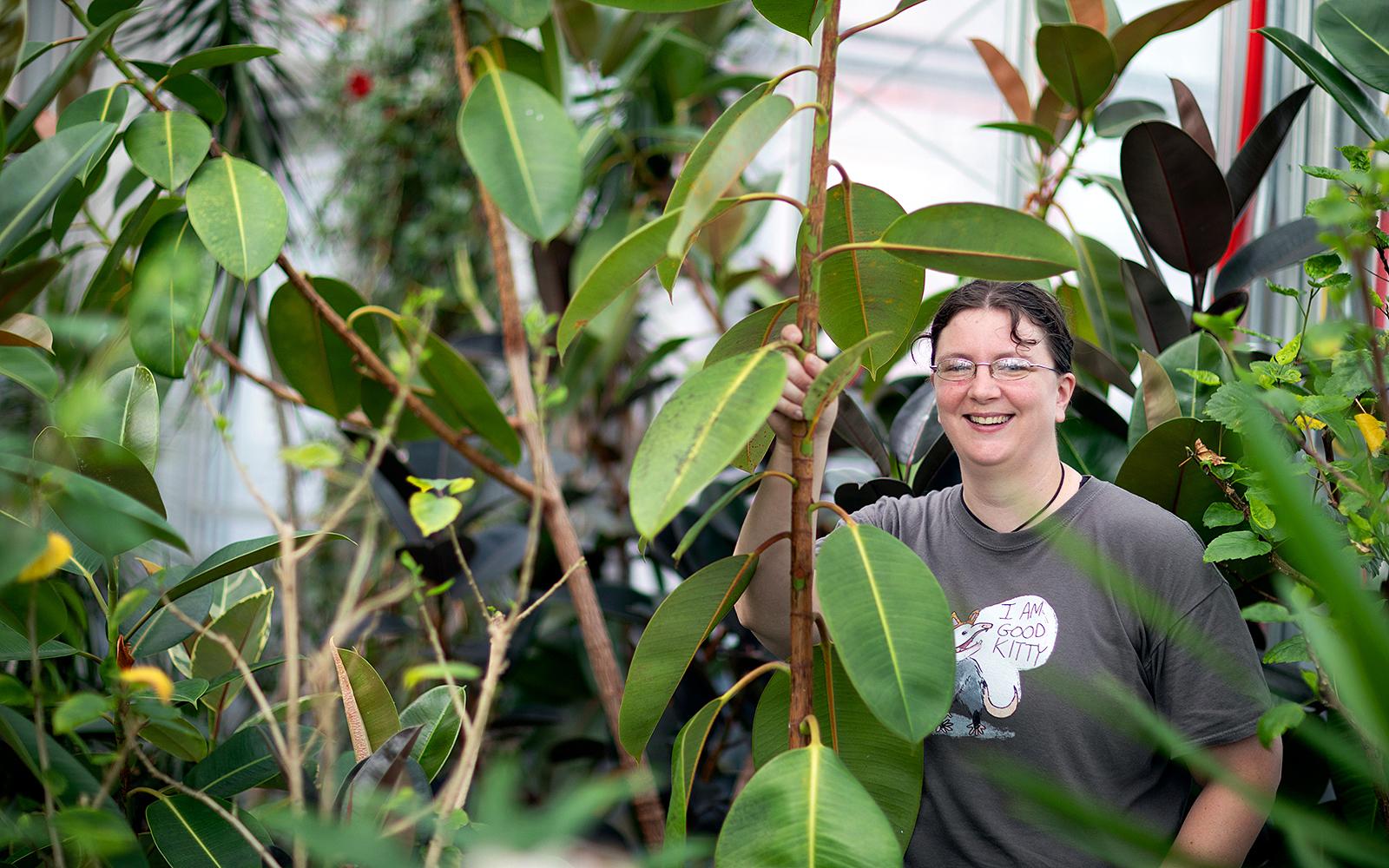 From minor emergencies like tick bites, to life-threatening illnesses at nursing homes, Schappert dealt with the daily unpredictable nature of the job. She remembers one night getting called out to a house in the middle of the night after an elderly woman tripped over her cat and broke her femur, humerus, radius and ulna. She rushed her to the hospital and transferred her into the care of the doctors at the ER. Most of the time, after she drops off a patient, she never sees them again, but this time it was different.

“A few months later, I was working at a county fair, and I had this woman come up to me and give me a hug. She said, ‘You were at my house at two in the morning six months ago and my mother made it through rehab and she’s home.’ I was like, ‘That’s fantastic,’” Schappert recalls. “You don’t usually get feedback; you drop them off at the hospital and then that’s it. So, running into someone afterward, that was really nice.”

Despite the positives of the job, the stress of the work weighed on her over time. “I was just so burned out that I couldn’t do it anymore,” she said. “You’re running between three to five calls on a 12-hour shift and there’s not always enough time to destress after work. It gets tiring.”

In the middle of the Spring 2021 semester, she approached Ray Bowdish ’87, coordinator for the WISER Center, to find out more about beekeeping opportunities at the College. Schappert is now overseeing the College’s beekeeping efforts, funded through an Alcoa grant. “I almost bought hives on a whim last year, so being able to do this through SUNY Potsdam where I’m not invested financially is fantastic,” she said. “Last week I popped the lids off and took a quick look to see if they still had enough room, see how they’re doing, make sure that the queen is still there,” she said.

The bees have been thriving in their new home, prompting Schappert to continually add new supers to the hives, boxes that are stacked vertically to allow the bee population to expand and honey production to boom. This fall the hives will be harvested during the annual Honey Harvesting Hoedown, but Schappert notes that there’s a careful balance between taking honey for human consumption, and leaving enough for the bees to survive.

“They’ll live off the honey that they made, so when you’re taking honey in the fall you have to calculate how much they will need to get through the winter,” she said. “Bees in the winter will bundle themselves into a ball around the queen, and they’re actually really warm, but a lot of times they don’t survive, it’s just the nature keeping bees this far north.”

She wears many other hats besides her beekeeping veil. As part of a month-long project with Dr. Jessica Rogers, Schappert and four other research assistants have been mapping the purple loosestrife, an invasive species in Northern New York. The data collection plays an important role in thwarting the spread of the purple loosestrife by identifying the best locations to release beetles, which will in turn devour the plants and help preserve native wetland habitats.

Taking care of a mix of turtles, snakes, fish, and bearded dragons within the walls of Stowell is another top priority for Schappert. After harvesting fresh lettuce and kale from the Wiser Greenhouse, she has been feeding the animals fresh produce every week. Her favorite part of the job? Intermingling with the friendly snapping turtle, or carrying a corn snake around her shoulders—a cathartic experience for someone who has dealt with life and death experiences in the back of an ambulance for the past decade. “I’m enjoying it. Being able to come in here and have the hands-on experience is fantastic,” she said.

This fall she will be completing an internship as part of the WISER Center’s Pollinators initiative, an extension of her beekeeping efforts this summer. Schappert will be overseeing a variety of tasks including hive management, hive inspections for disease and pests, Varroa mite sampling, and preparing the hives for winter, as well as helping with WISER educational events in the apiary. In addition, she will also be taking courses in integrated calculus, organic chemistry, the biology of woody plants, and evolutionary biology as she prepares for a completely new career in biology.

For more information about the Department of Biology, visit: https://www.potsdam.edu/academics/AAS/depts/bio