Camille Holmes ’19 comes from a long line of strong women. Her grandmother, Dorothy Holmes, in particular, was a pioneer, blazing the way for other women in the field of science. Holmes grew up with her encouragement and support, spending much of her childhood at her grandparents’ farm caring for horses, helping at their veterinary clinic and developing a love for animals—something that she’s still passionate about today after getting a degree in biology from SUNY Potsdam and while now pursuing a Ph.D. in immunology and infectious disease at Cornell University.

“I definitely loved the small community at SUNY Potsdam. It’s really great because every professor that I had, knew my name, knew my story and knew me—it’s kind of amazing!"

Her grandmother also attended Cornell University (the veterinary school in her case) and went on to enroll in a Ph.D. program at a time when women were not pursuing advanced degrees. “She was always a big inspiration. She always tells me the story about when she walked into the dean’s office, after being denied entrance to the veterinary school, and the dean told her, ‘Well, you’re a woman, you don’t want to be out in a barn in the middle of the night birthing a calf.’ He was sitting behind a big mahogany desk wearing a suit, and she said, ‘You don’t quite look like you could birth a calf in the middle of the night either.’ She was a very sassy woman, and he was taken aback, but she then got accepted into veterinary school and she went on to get her Ph.D. in microbiology. I was raised by very strong women who told me I could do whatever I wanted to do,” Holmes said.

In her youth, Holmes spent a lot of time at her grandparents’ farm, caring for her bay gelding horse, Commandment I, and helping her grandparents at their veterinary clinic. “I love working with animals. I always wanted to be a vet because I thought that’s how you work with animals, but I found out that I could do research and still do what I love to do, without necessarily being a clinical practitioner,” Holmes said.

In high school, Holmes was accepted into New Visions, a unique program where she spent her senior year at Cornell University doing research and shadowing veterinarians at the vet school. While there, she got to work with her grandmother’s old friend, Dr. Doug Antczak, doing research on equine immunology.  “I was working with him and I was having an awesome time doing it! I was also shadowing at the vet school, and I started favoring the research aspect of it. I thought it was absolutely fantastic,” she said.

Holmes came to SUNY Potsdam in 2015 and immediately met another woman who was as inspirational as her grandmother—Dr. Sarah Sirsat, an assistant professor of biology. “She’s been so helpful. I came to her the second week of classes and I said, ‘I want to do research with you, what can we do?’ She was just really excited and completely welcoming. Throughout the years, I’ve gotten closer and closer to her, and she’s been supportive with the research, but also just as a person too. Unfortunately, my horse from childhood passed away last spring and she was there for me. It’s great to have someone who cares. She has me over to family dinners sometimes too, it’s a lot of fun,” Holmes said.

“I definitely loved the small community at SUNY Potsdam. It’s really great because every professor that I had, knew my name, knew my story and knew me—it’s kind of amazing! The three professors I interact with the most are Dr. Gordon Plague, Dr. Jan Trybula and Dr. Sirsat. I’ve taken classes with all of them, and they’ve been fantastic! The whole time that I’ve been here it’s been kind of like you’re in this big family, instead of just another number,” she said.

Under the guidance of Sirsat, Holmes was immersed in a Presidential Scholars Research Project in Stowell Hall. In addition to the $1,800 a year that she received through the program, she also got another $600 through the Kilmer Undergraduate Research Apprenticeship, allowing her to buy all the necessary chemicals and supplies for her avian physiology research project focused on the King Quail species—specifically the Red Breasted King Quail that display different plumage color morphisms known as silver, wildtype and cinnamon variations.

“We had to take all these birds and breed them until we could get the recessive traits showing up to produce purebred lines—a very time-consuming process. We started out with a colony of about 20 birds and I bred them for two years to produce all the different color morphisms that I need,” she said. 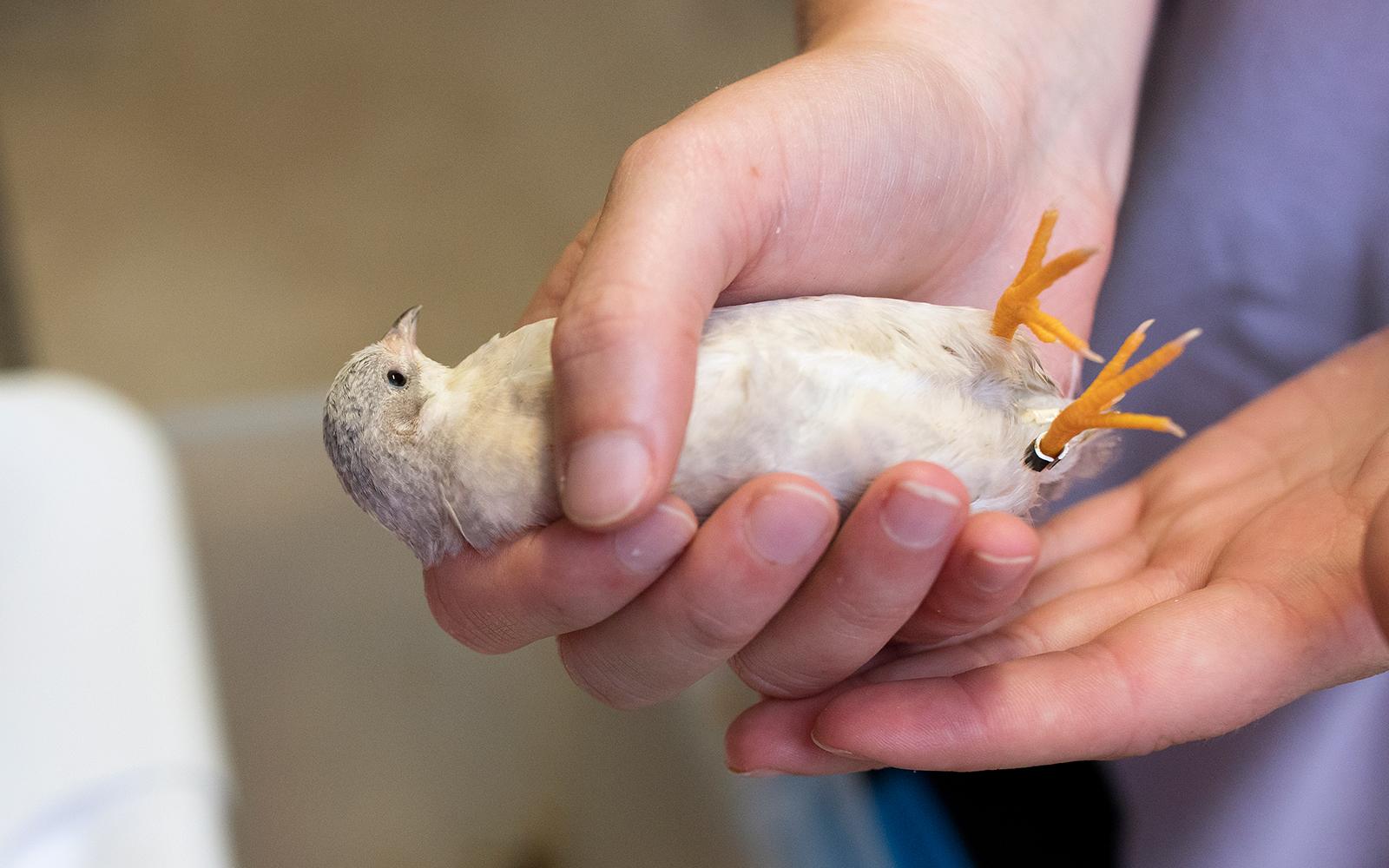 The silver, wildtype and cinnamon variations were separated into different cages on the shelves of Sirsat’s lab in Stowell Hall, with heat lamps keeping them toasty at all times. “Just based on observations, we noticed that the cinnamon and the wildtype were more successful, and the silver a little bit less successful at growth, survivorship and reproduction,” Holmes said.

She said that the gene causing the silver plumage color may be related to differences in physiological traits. During her senior year she took muscle samples from the birds to look at their mitochondria function and see how well they are processing food and energy, trying to find out if the silver variety was less successful due to poor mitochondria function and poor energy production. “I was trying to look deeper and see if there’s some underlying force that we could decipher,” she said.

Holmes completed all of her undergraduate studies at SUNY Potsdam—majoring in biology with a minor in chemistry—with a perfect GPA. She held leadership positions in Biology Club, the Pre-Health Club, Beta Beta Beta Biology Honor Society and Gamma Sigma Epsilon Chemistry Honor Society, while serving as the student representative on Faculty Senate's Academic Policies and Curriculum Committee. Outside of the university she rides and competed as an equestrian. She received the Biology Department Award, Departmental Scholar Award, Tri-Beta Research Award and George R. Isenberg Award.

For more information about the Department of Biology, visit www.potsdam.edu/academics/AAS/biology