As a young child, Kitten Panthera remembers accompanying her grandfather to the store to purchase elementary mathematics workbooks, and then happily working through the problems with him, as other children might tackle a coloring book.

She never gave much thought to her grandfather’s legacy, until he took her to the library to see his listing in “Who’s Who in America.” 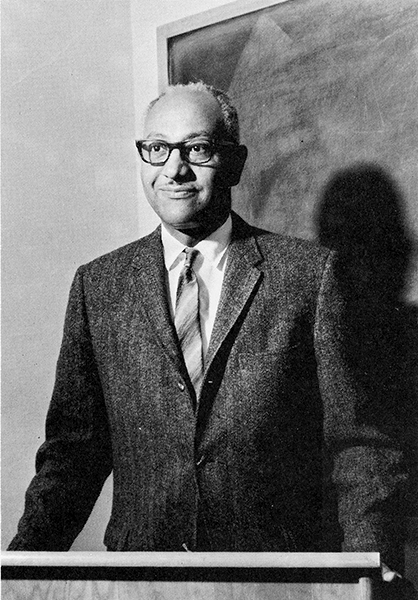 Dr. Clarence F. Stephens Sr. (1917-2018), the legendary former chair of the SUNY Potsdam mathematics department, was a very humble person, Panthera said, even though for years after his retirement, he was still being flown across the country to discuss his teaching methods.

“He said to me, ‘I don’t know why they make such a big deal. All I did was teach people how to read a textbook, but they keep asking me,’” Panthera said at a ceremony honoring her grandfather at SUNY Potsdam in May 2016. “He is one of the most modest people I know.”

Yet for all his modesty, Stephens’ legacy runs far deeper than that, and stretches beyond the SUNY Potsdam campus, where he taught for 17 years.

To Stephens, his philosophy was simple and intuitive; he believes that anyone can learn mathematics under favorable conditions.

“More than 50 years ago, I came to the conclusion that every college student who desired to learn mathematics could do so,” Stephens told the Mathematical Association of America in 1997. “I spent my entire professional life believing that this was the case.”

His daughter, Dr. Jeannette Stephens, herself a mathematics professor at Whatcom Community College, said that a large part of her father’s philosophy relied on teaching the students how to learn, how to read a textbook and understand it, and how to think logically and ask questions.

These were concepts that her father took from his studies at the Harbinger Institute, a boarding school in Irmo, S.C., and Johnson C. Smith University in Charlotte, N.C., both of which were schools seeking to train the future Black leaders of the U.S.

Stephens carried that determination with him through his studies, when he became the ninth African-American to receive a Ph.D. in mathematics, which he completed at the University of Michigan. From there, he accepted teaching positions with the U.S. Navy and at Prairie View A&M University, but he wasn’t able to fully put his teaching philosophy into action until he was offered the position of chair of the mathematics department at Morgan State University.

At Morgan State, Stephens was presented with students, many of them from the inner city, whom no one believed could succeed at math, his daughter said. In his zeal to change that mindset, his teaching philosophy was born.

Professor Emeritus Dr. Vasily Cateforis, who succeeded Stephens as chair of SUNY Potsdam’s mathematics department and was also his former student at Morgan State, said the most remarkable takeaway that he received from studying under Stephens was confidence.

Stephens did not lecture and would not give out a syllabus, preferring to set a leisurely pace as opposed to rushing through the material. In his classes, he facilitated independence in students, Cateforis said.

“Under Dr. Stephen’s care, the mathematics department was a place where students acquired confidence through simple but worthwhile tasks and self-respect,” he said. “We came to feel that we could do anything, especially mathematics.”

Under Stephens’ tutelage, the mathematics department at SUNY Potsdam was centered around caring for and supporting students, while nurturing a passion for mathematics.

“His leadership was most evident in the atmosphere he created in the mathematics department,” said Professor Emeritus Dr. Richard Del Guidice, Hon. ’92. “For many undergraduates, math is a pretty scary discipline, but Clarence was able to lead a very diverse group of faculty in creating a department that was supporting and nurturing for students.”

It was also Stephens’ belief that students should be challenged to succeed, which included having access to graduate-level mathematics courses as early as their sophomore year. This idea led to the basis for SUNY Potsdam’s combined Bachelor of Arts/Master of Arts (BA/MA) program in mathematics, which allows qualified students to earn both their bachelor’s and master’s degrees in four years.

“He was most concerned about what the students could do,” Jeanette Stephens said.

While his teaching philosophy and his ideas have changed mathematics education at SUNY Potsdam and at universities around the country, his daughter said that it would be impossible to fully replicate the method he used.

She knows, because she’s tried. He is the “Mozart of mathematics,” she said.

“It came to him so naturally, he couldn’t lay out step-by-step what he would do,” she said. “He really had a gift.”

SUNY Potsdam continues to offer one of the strongest mathematics programs in the country, based on the teaching-centered foundation established by Stephens. The department’s philosophies and ideals have not wavered, said Professor Dr. Cheryl Miller.

“We care about our students,” she said. “We encourage them to strive, to learn mathematics at very high levels. We guide them to discover that they are actually very good at mathematics when they never knew it.”

Upon his passing at 100 years of age, Stephens had received many accolades for his achievements over the years, including three honorary degrees. In 1983, he was inducted into the Smithsonian Institution’s National Museum of American History, as part of the Living History Project, recognizing Black Americans in the sciences.

In recognition of the transformative role that Stephens played in the College’s history, SUNY Potsdam honored him in May 2016 with a special celebration coinciding with its bicentennial year. Many friends, family members, alumni and colleagues gathered on campus to unveil a bronze plaque that is now permanently displayed in Carson Hall in Stephen’s honor.

It’s a small token of appreciation for a professor and leader whose legacy is deeply felt on Potsdam’s campus and across the nation.