A Mover and Shaker

Unlike the slowly developing rock formations that she studies with her students, Dr. Page Quinton has moved mountains since she started at SUNY Potsdam—infusing the campus with her passion for teaching as she launches new applied learning initiatives in and out of the classroom.

“Geology is inherently a hands-on discipline. In all our intro labs, students have access to rock and mineral kits, and our extensive world-class rock and mineral collection,” Quinton said. “Holding fossils, like a trilobite eye from 540 million years ago, and learning how to identify them, is always exciting.”

Now in her sixth year at the College, Quinton has been a leader in creating applied learning opportunities for students. From a stream table that models how water flows through coastal systems, to an augmented reality sandbox that projects three-dimensional images onto topographic maps—students increasingly have the tools they need to succeed after graduating with a degree from the Department of Earth and Environmental Sciences

“There’s no place I would rather be, in terms of the support I get from my department and the campus, than here at SUNY Potsdam.”

In 2019, Quinton and her colleagues built a new Geoscience Garden on campus with 41 boulders representing seven different rock formations dating from 1.1 billion years to 18,000 years ago—everything from the Precambrian basement rocks that make up the peaks of the Adirondacks, to the famous local Potsdam sandstone. 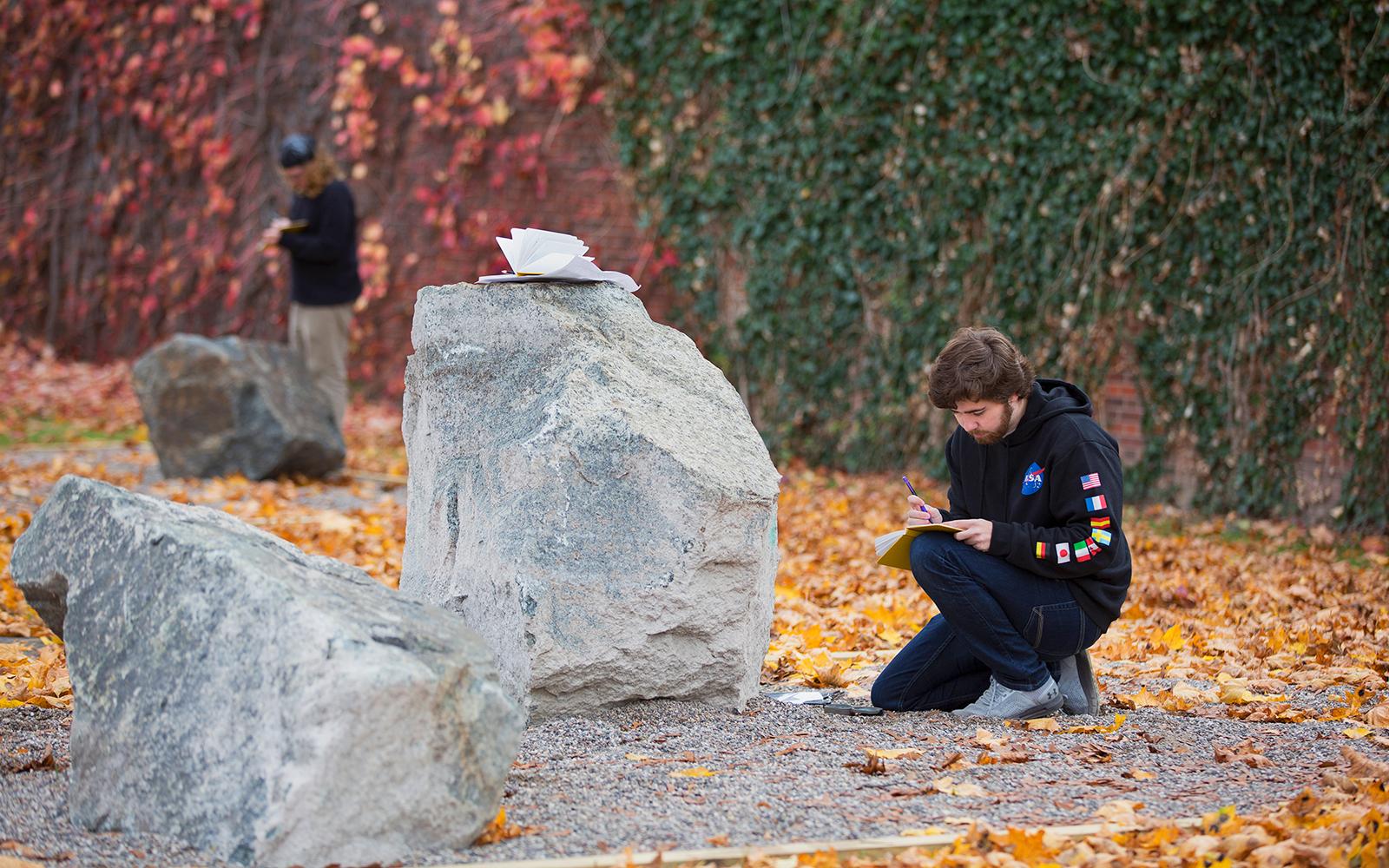 Liam Schmith takes notes in the Geoscience Garden as part of his “Field Methods in Geology” course.

“We have done a good job of creating some pretty unique applied learning tools on campus like the Geoscience Garden, a simulated geologic situation where students can go out and learn the basics in a controlled setting,” she said. “There’s a lot of time represented there that can be used for more than just the mapping exercises. Being able to go out and look at a sequence that represents the same events recorded in the Grand Canyon is an important process.”

Quinton’s impact at SUNY Potsdam can be seen around every corner at Timerman Hall, notably in the new geology museum that houses an impressive assortment of rocks, minerals, and fossils. “We decided to split it up into two sections, the rock and mineral side of things, and a ‘Walk Through Time’ exhibit where the rocks and fossils tell the history of the earth. Any student can scan the QR code, and it will take them to one of the digital tour supplements, an interactive PDF that I built, which highlights the rock or fossil and tells them what it is, and where it falls in the geologic time scale,” Quinton said. 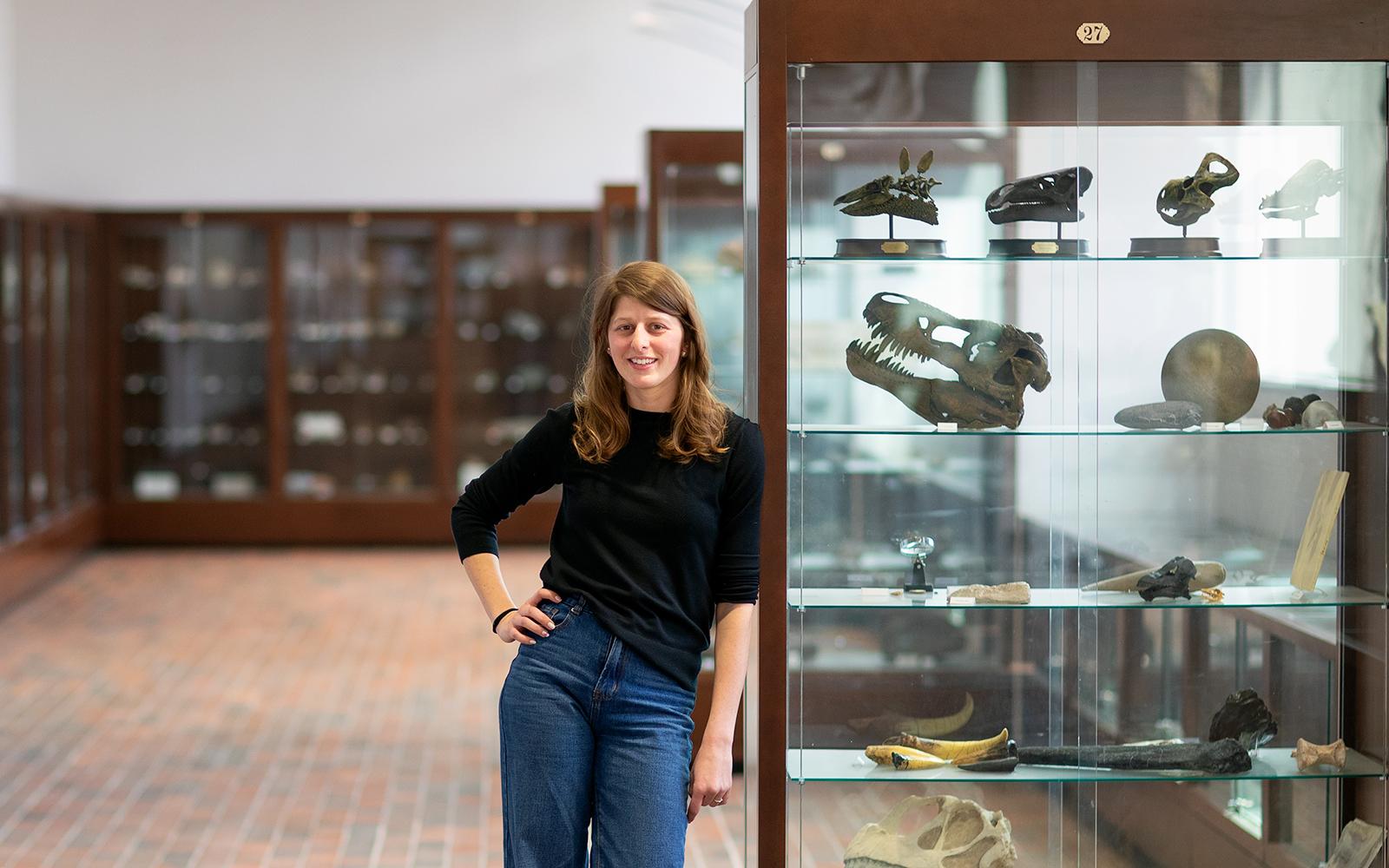 Page Quinton poses for a portrait in the geology museum in Timerman Hall.

Off campus, she leads field trips around the east coast where students put their skills to the test in a real-world setting. Quinton also spends six weeks every summer out west, working as a lead instructor for Indiana University’s field school in Montana. Potsdam students often join the cohort of 40 to 60 geology students from around the country for the hands-on geology camp. Recent alumni like Samantha McComb and Brandon Keough have attended the field school with Quinton as both students and teaching assistants. 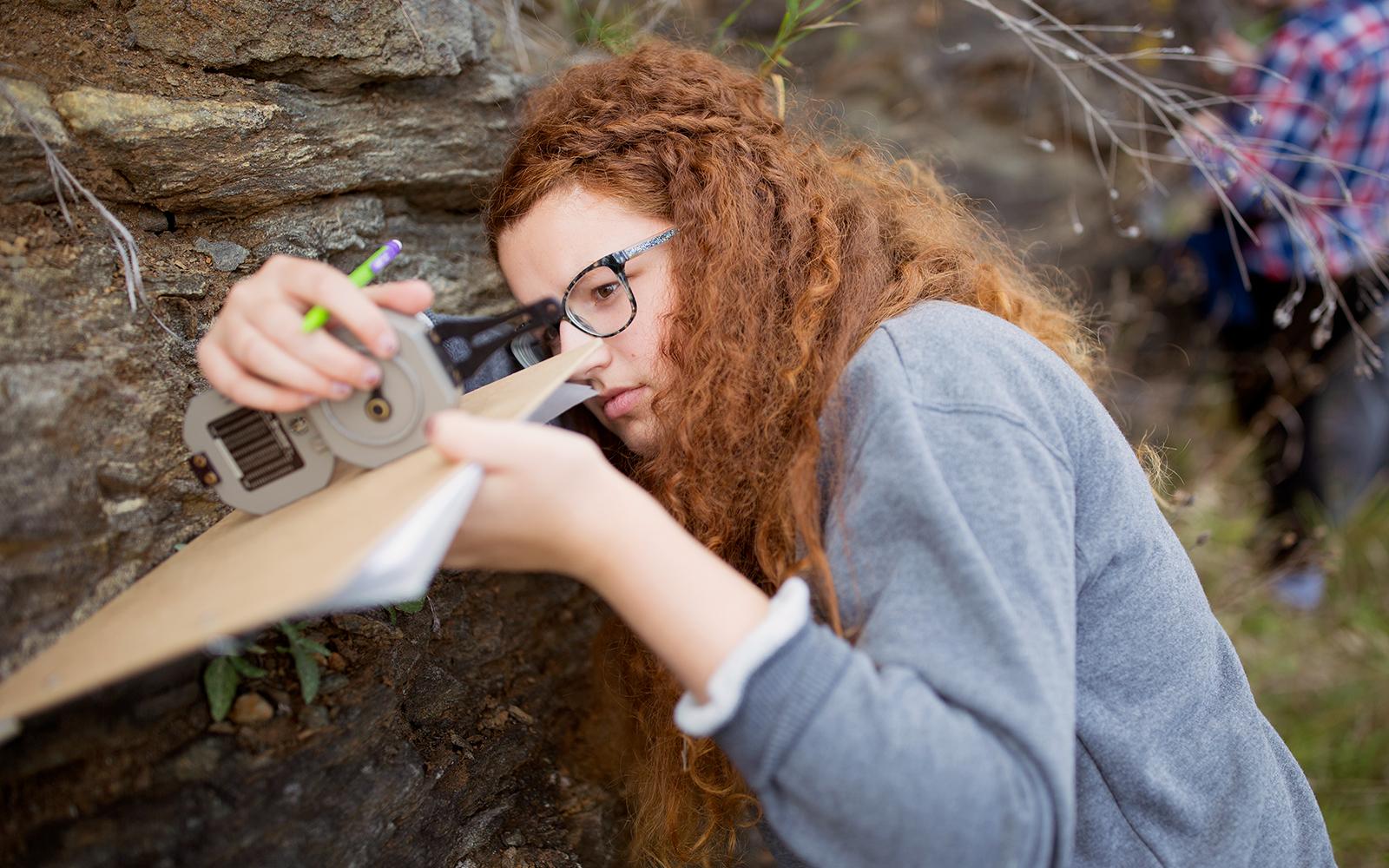 Samantha McComb '20 applies her geology skills in the field.

“We’ve had a good run of our students going to that field camp with us, and then going back to teach. They’re learning how to apply all the skills they’ve learned in geology to build geologic maps, and then interpret the geologic history. One of the reasons that field trips are so important is that they build a really strong sense of community—friendships that you normally don’t get to form in a classroom,” she said.

In addition to her work with students, Quinton has conducted ground-breaking research to uncover facts about the history of the earth. Using a mass spectrometer, she examined stable carbon compounds, and completed geochemical analyses of microscopic fish teeth and scales—confirming a hypothesis that climate change led to the demise of the dinosaurs 66 million years ago. After completing the research, her colleagues wrote up the findings, and their work was published in Science, a magazine that spans all scientific disciplines. Her research garnered national media attention, leading to interviews with the Washington Post, Newsweek, and NPR. Quinton is only the second professor in the College’s history to have her work published in Science. 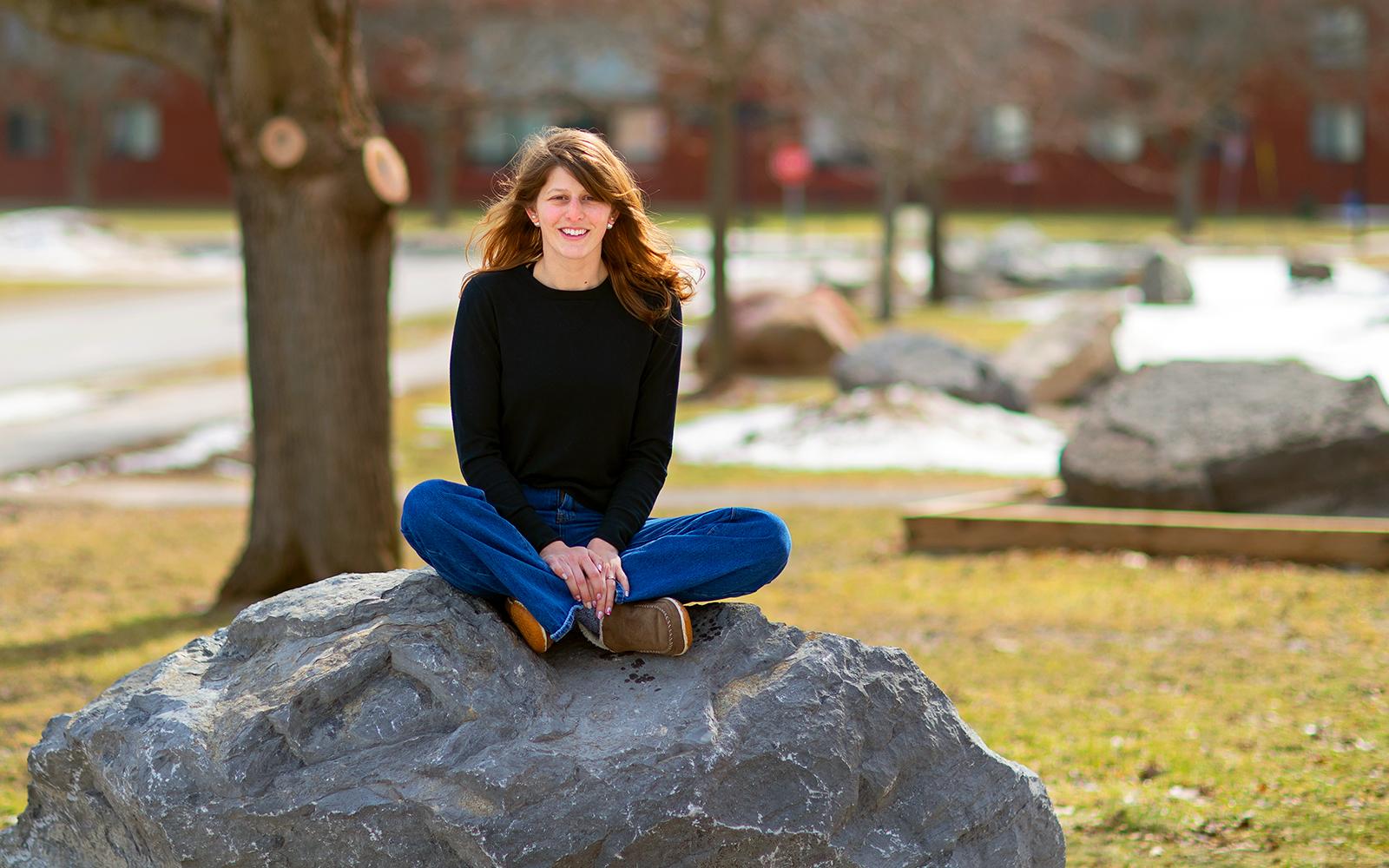 “It was an important finding because it was the first time that anyone had provided empirical evidence that global warming would have happened after the asteroid impact.” The science paper showed that climatic warming was what led to further stress that caused non-avian dinosaurs to go extinct,” she explained. Fossils are poorly preserved from that window of time because the oceans became slightly acidic when the asteroids hit the earth, but we had a unique collection of fossils from that time interval that allowed us to constrain those variables for the first time, so that’s why it was a big deal.”

Since her undergraduate days at Columbia State University, Quinton has been uncovering secrets from the past as she examines rocks, minerals, and fossils from around the world. Like many of her first-year students now at SUNY Potsdam, she initially didn’t know what path she wanted to pursue academically. One class changed all of that. “I had no idea what geology was, but I needed a science credit. The professor, David Schwimmer, was cool; he drove a motorcycle, and had a leather jacket. He was convinced that David Schwimmer the actor, who played Ross in ‘Friends,’ got the idea of being a paleologist from him,” she joked.

Venturing out to Flat Rock Park—in a region of Georgia where the coastal plains transition to bedrock—she was introduced to geologic formations she had never seen before. It was her first time setting foot on large sections of rock outcroppings, and witnessing waterfalls cascading down steep cliffs. That experience was the first step toward her career as a geologist, paleoclimatologist, and isotope geochemist. “What drives my interest in geology, is that it takes pieces from all the sciences, and combines them to answer questions that are really exciting about the history of the earth, about climate change, about the evolution of life,” she said.

After completing her undergraduate degree, she pursued a master’s degree and Ph.D. in geology at the University of Missouri, where she worked with Dr. Ken MacLeod, another professor who proved to be a valuable mentor. In 2016, she landed a tenure-track position at SUNY Potsdam.

“I knew that I wanted to work at an undergraduate institution like Potsdam, because that’s where I went to school initially, and that’s where I got engaged and excited about geology,” Quinton said. “I wanted to be that cool professor who was super excited about what I do and got other people excited about it. There’s no place I would rather be, in terms of the support I get from my department and the campus, than here at SUNY Potsdam.”