Standing at the front of the stage with her baton in hand, Christina Morris ’21 conducts a talented group of music students, directing a confluence of sounds rising from the violins, violas and cellos assembled before her.

A Concert for Equity and Equality marked the culmination of Morris’ success as a musical studies major at SUNY Potsdam’s Crane School of Music. Highlighting women and diversity within the field of music, Morris spent months preparing for the momentous occasion at Hosmer Hall. Applying for a grant through the Lougheed Center for Applied Learning, she secured funding for her musicians, and hired Monica Trummer ’22 and Crane alumna Sofia Coyle ’20 to create original compositions for the performance.

“I had not conducted a whole concert before, let alone organized an entire concert myself, independently,” Morris said. “I was fortunate enough to receive the YES  Grant (Dorf Applied Learning YES Fund). It was such a blessing for me to get the experience of writing a proposal because that was all new to me.

The concert, which also featured a composition by Dr. Ivette Herryman-Rodriguez, was aimed at infusing the classical music scene with more diversity. “The last two pieces were dedicated to commemorating Dr. Lonel Woods and Dr. John Graham, and featured African American artists and composers,” Morris said. “The vocal piece included all people of color on stage, and I know from my experience here at Crane, I’ve never seen that before. This is the first step of a dream coming true, and it’s a step for our community, and something that is necessary to ignite, or at least take a step toward change.”

"I have been able to find many mentors. I would like to thank Dr. Sullivan for inspiring me and helping me fall in love with the craft that I know I want to pursue for the rest of my life.”

Morris was first introduced to composing and conducting when she was in high school. Working with Harry Marenstein, the conductor of the Gemini Youth Symphony Orchestra, she discovered a passion for the craft that she carries with her today. “He was my first conducting mentor. He really opened me up to this whole new world. He handed me a score and told me to study it intently. He was a professional who believed that I could actually pursue it,” she said.

When she was looking for the right college to build on those experiences, she turned to SUNY Potsdam after talking with her friend, Skye Hamilton-Carranza ’19, who was finding success at SUNY Potsdam. “I was like, ‘He’s studying at Crane, maybe I should go there.’ I trusted Skye and his musicianship, and since he was doing great, I was sure I could have room to grow in this program as well,” she recalled.

At first a double major in music performance and music education, Morris switched to musical studies, seeing it as a more direct route to becoming a conductor within the Department of Music Theory, History & Composition. “When I was younger, I knew I was passionate about being a conductor, but I never fully believed that I could because of the color of my skin, my gender, or my sexual identity. I didn’t know that I would be in a position where I could conduct an ensemble, but I knew that I wanted to learn,” she said.

Morris continued to grow as an artist at Crane. Working with Dr. Timothy Sullivan she discovered new opportunities that sent her around the world. At his encouragement, she applied to the National Youth Orchestra (NYO) of the United States her freshman year, a prestigious program that brought together the best young musicians from around the country. Morris was one of just two conducting apprentices accepted into the summer program. 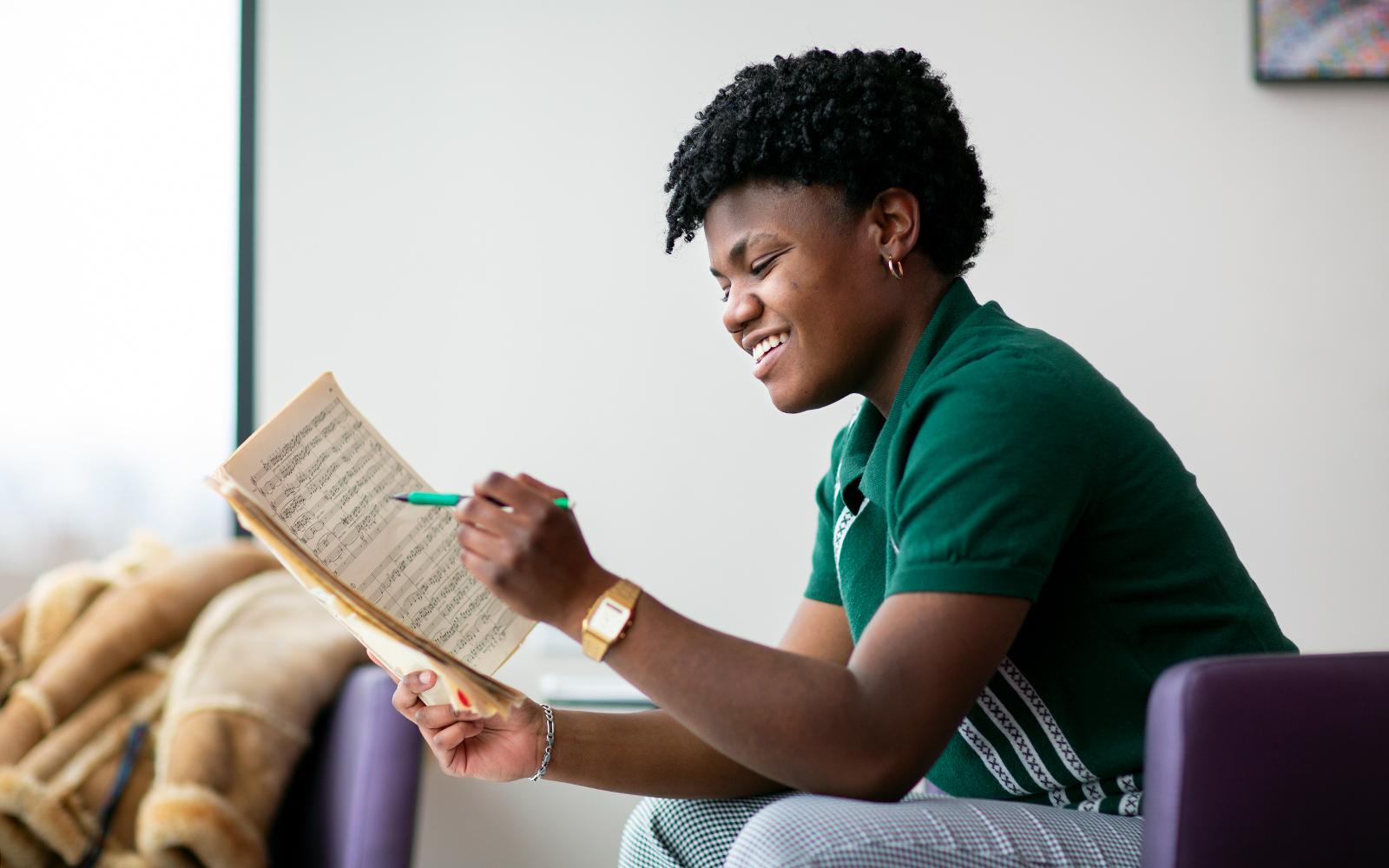 Beginning at Pace University and Carnegie Hall, she embarked on a tour of Asia with performances in South Korea, China, Hong Kong, and Taiwan. The NYO, a tuition-free program offered through Carnegie Hall, allowed her to work with world-renowned composer Michael Tilson Thomas, who provided her with valuable feedback as she refined her craft during rehearsals. “That was the first serious conducting opportunity that I had. It was a lot of pressure, but I fell deeply in love with conducting,” she said.

Back at Crane, she worked with Michelle Rofrano, an accomplished guest conductor leading the pit orchestra during Crane’s Fall 2019 Opera Ensemble production of the "Marriage of Figaro". When Morris wasn’t performing as a bassist in the orchestra, she was able to shadow Rofrano, and learn valuable techniques from a working professional. 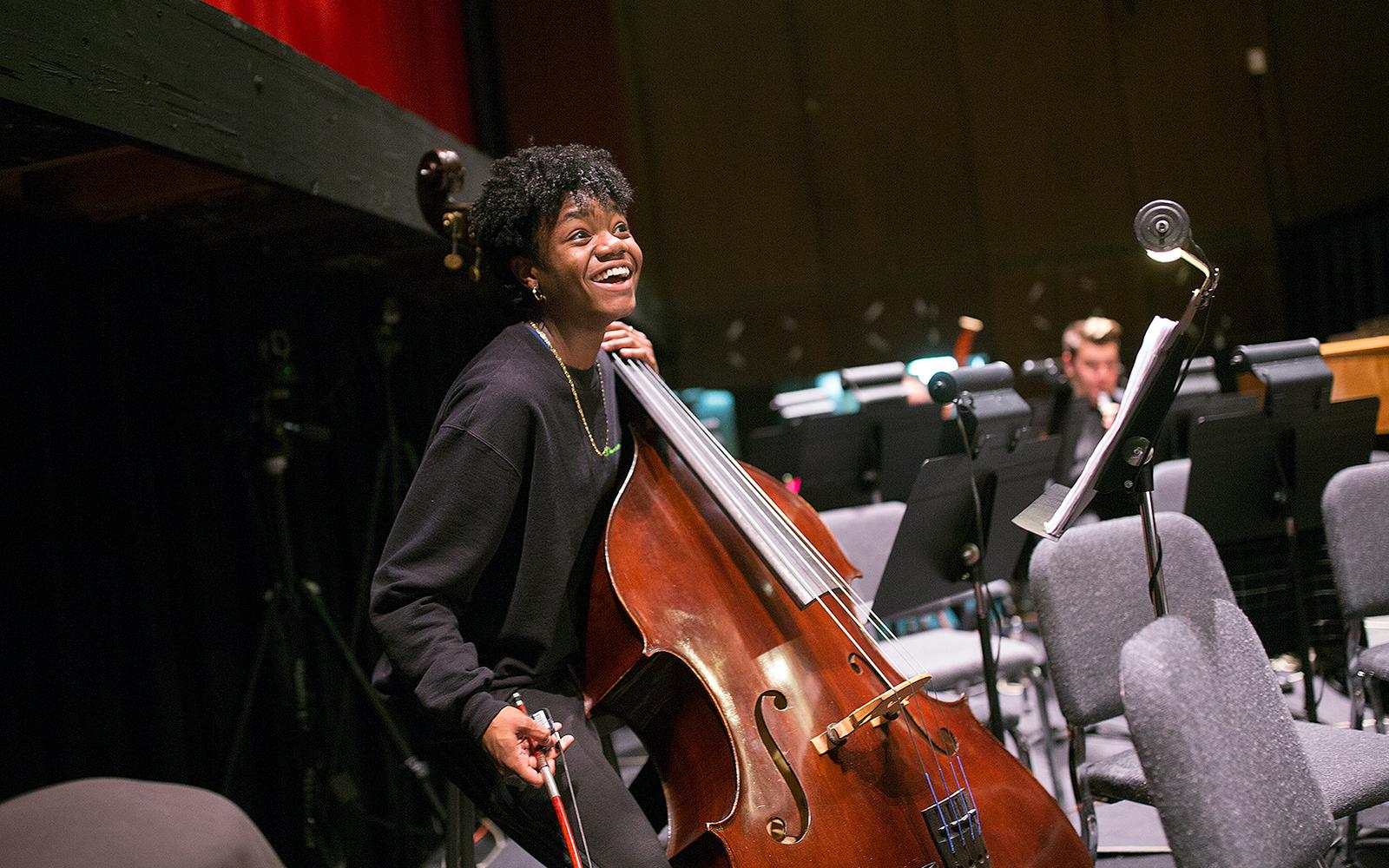 Morris plays the bass during a rehearsal for the Marriage of Figaro.

Building on her success, Morris was accepted into Tanglewood’s conducting program as a seminarian—the youngest student, and first Black woman, to ever be chosen for the distinguished program. The summer home of the Boston Symphony Orchestra, Tanglewood features the top musicians and conductors from around the world, providing her with a rare, behind-the-scenes look at the prominent orchestra in action. Recently accepted back into the conducting program, she will be returning to Tanglewood in the summer of 2022. This spring she will also be traveling to Miami to attend a workshop with the New World Symphony—with the plans of parlaying these experiences into more advanced conducting opportunities and fellowships in the future.

As she graduates, she reflects on her audition at Crane years earlier when they asked about her goals for the future. “I want a true mentor, just one. I’m sure I won’t let them down, and I’m sure I won’t let the school down,” Morris recalled saying at the time. “Since then, I have been able to find many mentors. I would like to thank Dr. Sullivan for inspiring me and helping me fall in love with the craft that I know I want to pursue for the rest of my life.”