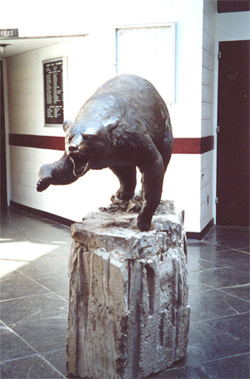 Prior to 1961, athletic teams referred to themselves as "The Racquetteers." However, as the years went by, many people wanted a change. In 1958, people began voicing their opinions to the Athletic Committee. "I would like to see it changed because it has nothing to do with our school or school spirit," said one spectator. One of the professors, Dr. Maxcy also stated, "It would be nice to have something easy to cheer for." After hearing numerous opinions on the issue, the Athletic Committee responded with a contest offering a $10.00 reward to anyone who could think of a new name and mascot for the college.

After numerous contests throughout the years, a new mascot was finally chosen. By 1961, Potsdam State athletic teams would now call themselves, "The Polar Bears." The polar bear mascot made its first appearance at a basketball game against New Paltz College, December 8, 1962.

By 1963, students again began expressing their opinions against the mascot, believing it to be a misrepresentation of the college and its athletics. In response, the senior class purchased a bear outfit to be worn by a student, much more ferocious in appearance than the polar bear. This marked the end of the pink and white polar bear. The 1964 school year would begin with "The Bear" as the new official mascot.

In 2001, Maxcy Hall became the home of the bear statue. Dr. Neil Johnson, Director of Programs and Operations, initiated the development of the statue in an effort to add community spirit and pride to athletics at SUNY Potsdam, with additional support from various organizations on campus. The development of the bear statue was underway, mimicking the original bear emblem that was once embroidered on all athletic uniforms. Stephen Chambers, a 1979 graduate of SUNY Potsdam and regional artist, was the designer of the statue.

Today, the bear statue sits on the second floor of Maxcy Hall where it demonstrates community spirit and pride at SUNY Potsdam and proudly represents the college's long history of athletics.