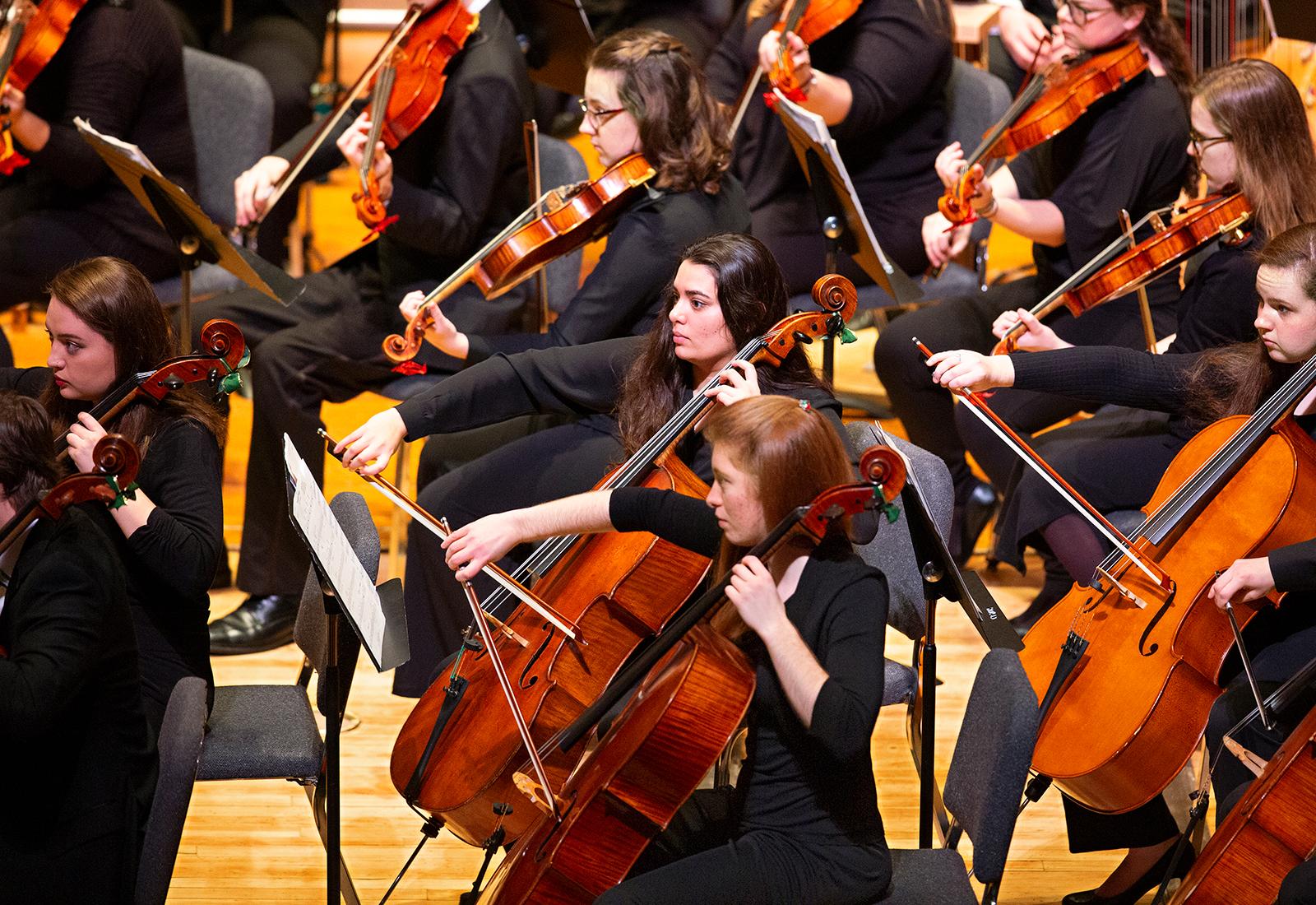 The Crane Symphony Orchestra, directed by Ching-Chun Lai, is set to perform on Tuesday, Nov. 16 at 8 p.m. in the Helen M. Hosmer Concert Hall. For the livestream and program details, visit www.potsdam.edu/cranelive.

The stages at SUNY Potsdam’s Crane School of Music will be filled for the next series of performances, featuring the institution’s large ensembles.

Led by experienced faculty, Crane’s talented student musicians are set to perform in a series of free upcoming concerts. For a full listing of upcoming concerts and links to the latest livestreaming performances, visit www.potsdam.edu/cranelive.

Wednesday, Nov. 17, Crane Concert Band, 8 p.m., Hosmer Hall
Directed by William L. Lake Jr., the Crane Concert Band will present a concert titled “All the Things You Are.” The program includes the eponymous “All the Things You Are,” with Mike Tomaro’s Latin-style arrangement of the Broadway tune written by Jerome Kern (and lyrics by Oscar Hammerstein II), juxtaposed with Aaron Perrine’s “All the Things I’m Not.” The band will also present Andrew Blair’s “anti-FANFARE,” Katahj Copley’s “Song for Ursa,” Alton Adams’ “The Governor’s Own March,” Erika Malpass’ “out of a mountain of despair,” and Alfred Reed’s “Russian Christmas Music.”

Friday, Nov. 19, Eclectic Ensemble, Hosmer Choir and Phoenix Club, 8 p.m., Hosmer Hall
The Eclectic Ensemble, Hosmer Choir and Phoenix Club are all conducted by Dr. Nils Klykken. The vocal groups will join forces for a moving concert, starting with the Eclectic Ensemble’s performance of original works by Crane students, starting with Declan Kirby’s “Myself to Myself,” followed by “anchor,” by TaeJean LaCroix, Elira Mavraj and Abby Swanson. The Phoenix Club will offer an improvisation on the theme of “peace and love” to open their set, followed by Caroline Shaw’s “Its Motion Keeps,” Arvo Pärt’s “Peace Upon You, Jerusalem,” and Crane faculty composer Ivette Herryman Rodriguez’s “Quiéreme Entera.” The Phoenix Club will also present “When the Dust Settles” by Mari Esabel Valverde and “Grow as we Grow,” an original arrangement of Ben Platt’s poem by Crane student Leandra Wahlen. The evening will conclude with a series of Negro spirituals presented by the Hosmer Choir, including François Clemmons’ arrangement of “Steal Away,” an improvised arrangement of “Sometimes I Feel Like a Motherless Child,” and Undine Smith Moore’s arrangement of “We Shall Walk through the Valley.” The Hosmer Choir will also present two contemporary pieces including Mari Esabel Valverde’s culmination of trans stories brought to life, “When the Dust Settles,” and Veljo Tormis’ “Curse Upon Iron,” which reflects on the evils of war. 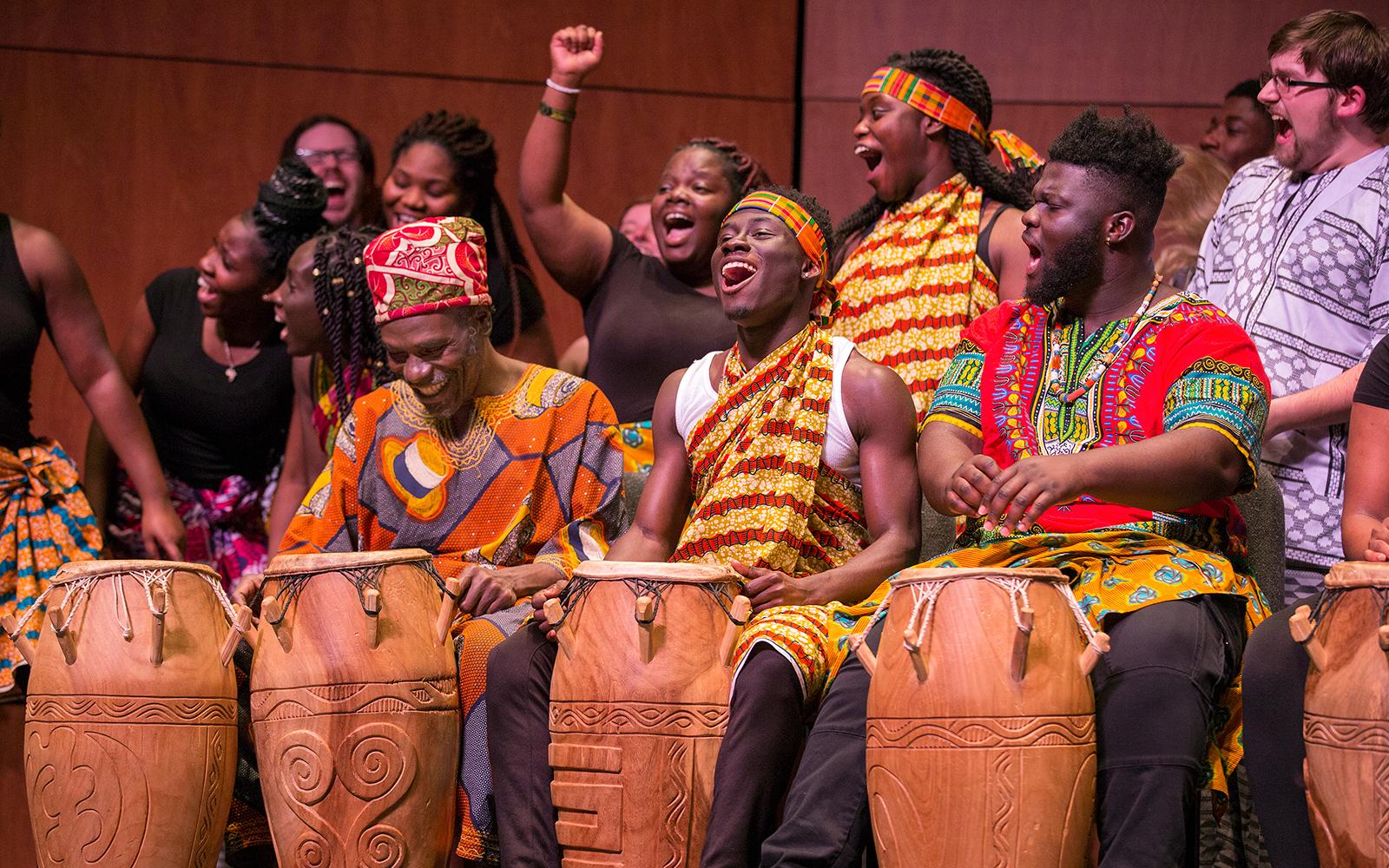 The Crane West African Drum and Dance Ensemble will perform along with guest instructor/artist Martin Kwaku Kwaakye Obeng on Saturday, Nov. 20 at 7:30 p.m., in the Sara M. Snell Music Theater at SUNY Potsdam's Crane School of Music. The performance will also stream live at the concert time, at www.potsdam.edu/cranelive.

Saturday, Nov. 20, Crane West African Drum and Dance Ensemble, 7:30 p.m., Sara M. Snell Music Theater
You won’t want to miss this high-energy, family-friendly performance by the Crane West African Drum and Dance Ensemble, directed by Julie Hunter and featuring guest instructor and artist Martin Kwaku Kwaakye Obeng. The group will perform “Salaam Malekum” to open the performance, followed by three dance-drumming pieces on the program—including Kpatsa (originating from the Ga-Adangme ethnic group of southern coastal Ghana), Agbadza (an Ewe traditional war dance-drumming genre performed in southeastern Ghana and southwestern Togo), and Kpanlogo (a type of Ga recreational genre developed in Accra, Ghana, during the country’s independence period in the 1950s). The program also includes “Tu Tu Gbovi (Away, Away, Little Goat),” a traditional lullaby from southeastern Ghana set in the Ewe language. The audience is encouraged to clap along, sing and dance in the aisles during this engaging performance.

Monday, Nov. 22, Crane Wind Ensemble, 8 p.m., Hosmer Hall
The Crane Wind Ensemble will offer a transporting evening of music, opening with Jack Stamp’s “Gavorkna Fanfare,” and followed by Persis Vehar’s “Winter Mountain,” which was commissioned for the group in 1996. The piece is inspired by Arthur Axlerod’s poem and by the landscapes of the Adirondacks in winter. The concert will continue with a transcription of Claude Debussy’s “La Cathédrale Engloutie (The Engulfed Cathedral),” followed by “Igor Stravinksy’s “Symphonies of Wind Instruments.” The concert will conclude with “Tarot,” a new work by Lindsay Bronnenkant inspired by three tarot cards and their meanings, ending with Gustav Holst’s “First Suite in E-Flat.” The Crane Wind Ensemble is directed by Brian Doyle.

Crane is thrilled to safely welcome back audiences for performances once again this year. Audience members will be required to wear face coverings, and seating will be socially distanced.

The events are a community benefit of being home to one of the premier schools of music in the nation—and thanks to livestreaming, anyone anywhere can watch and enjoy. To view all of the upcoming performances, and find the livestream link, visit http://www.potsdam.edu/cranelive.