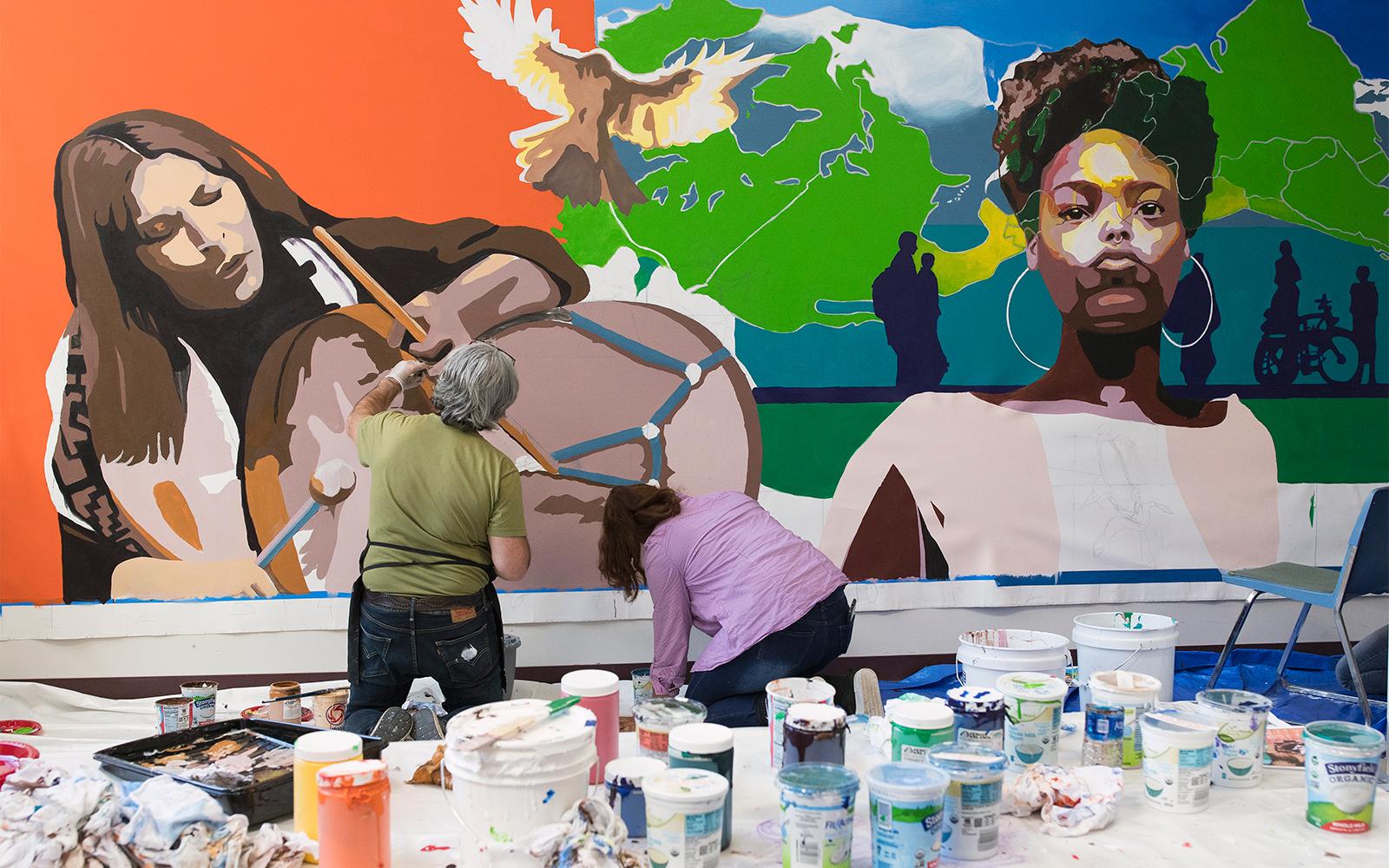 Francisco Letelier, left, works on a mural with Mara Frisbee ’22 during Letelier's visit to campus in March 2019. The Bridging Cultures Mural will be unveiled in the Lougheed Learning Commons on Dec. 5.

SUNY Potsdam will celebrate the installation of a Bridging Cultures Mural created by the Chilean-American artist Francisco Letelier and student artists with a ceremony on Thursday, Dec. 5 at 4 p.m., in the Lougheed Learning Commons lobby.

Letelier led the collaborative mural project during a visit to campus last spring, as part of a unique exhibit of Chilean arpilleras, in partnership with The Art Museum at SUNY Potsdam and St. Lawrence University’s Brush Gallery. The Bridging Cultures Mural project allowed students to work directly with Letelier on a mural connecting three decades of solidarity and cultural actions in support of human rights and democracy in Chile and Latin America, as well as current issues throughout the Americas.

Francisco is the son of Orlando Letelier, an economist, politician and diplomat who was exiled from Chile during the military dictatorship of Augusto Pinochet. A refugee in Washington, D.C., Orlando worked to inform the world about the human rights violations and atrocities occurring in Chile under Pinochet. In 1976, Orlando was assassinated by the Chilean secret police in Washington, D.C., when Francisco was just a teenager. After his father was murdered, Francisco turned to art, and founded the Orlando Letelier Brigade—creating murals to honor his late father, show Chile’s tumultuous history, and share his hope for the future.

The Bridging Cultures Mural project ran concurrently with the “Sewn in Protest: Chilean Arpilleras from the 1970s and ’80s” exhibition, which showcased the handmade Chilean patchwork tapestries at SUNY Potsdam’s Gibson Gallery, in March 2019.

Spearheaded by SUNY Potsdam History professor Dr. M.J. Heisey and Spanish professors Dr. Liliana Trevizán and Dr. Oscar Sarmiento, the exhibitions showcased arpilleras, Chilean patchwork tapestries from the 1970s and 1980s that depicted protests against human rights violations in Chile, but also the extraordinary efforts to care for families and communities, and to celebrate the joy of life. Early arpilleristas, as the artists were known, sometimes sewed the tapestries from scraps of clothing from missing or abducted relatives.

North Country Public Radio was the media sponsor for “Sewn in Protest" and the Bridging Cultures Mural Project.

The Art Museum at SUNY Potsdam serves as the center for visual arts at the College. For more information, visit www.potsdam.edu/museum.

The School of Arts and Sciences at SUNY Potsdam exposes students to a variety of fields within the fine arts, sciences, humanities and social sciences. The School’s strong foundation in the liberal arts prizes creativity and inquiry, offering a full palette of study in 18 departments offering majors, minors and interdisciplinary programs that encourage hands-on learning opportunities for every student. To learn more, visit www.potsdam.edu/academics/aas.