A Veteran’s Passion for Medicine

Sitting in his high school classroom on Sept. 11, 2001, Kellen Bertrand ’21 watched helplessly as the worst terrorist attack in American history unfolded before him.

At the time, he was still a sophomore at Ogdensburg Free Academy (just 30 miles from SUNY Potsdam), but in that moment he felt a calling to join the military. “That certainly impacted me and gave me a sense of purpose and desire to contribute,” Bertrand recalled.

He enlisted in the U.S. Navy, and when he graduated from high school in 2004, he immediately started boot camp. For seven years he served as a Hospital Corpsman and was tasked with handling everything from minor surgical procedures like sutures and wound care, to more serious life-saving medical interventions. He operated an ambulance, administered vaccinations, drew blood, and was responsible for assessing and treating patients in an outpatient clinic. “I've been interested in medicine for as long as I can remember so becoming a Navy Corpsman was definitely my choice before enlisting,” Bertrand explained. 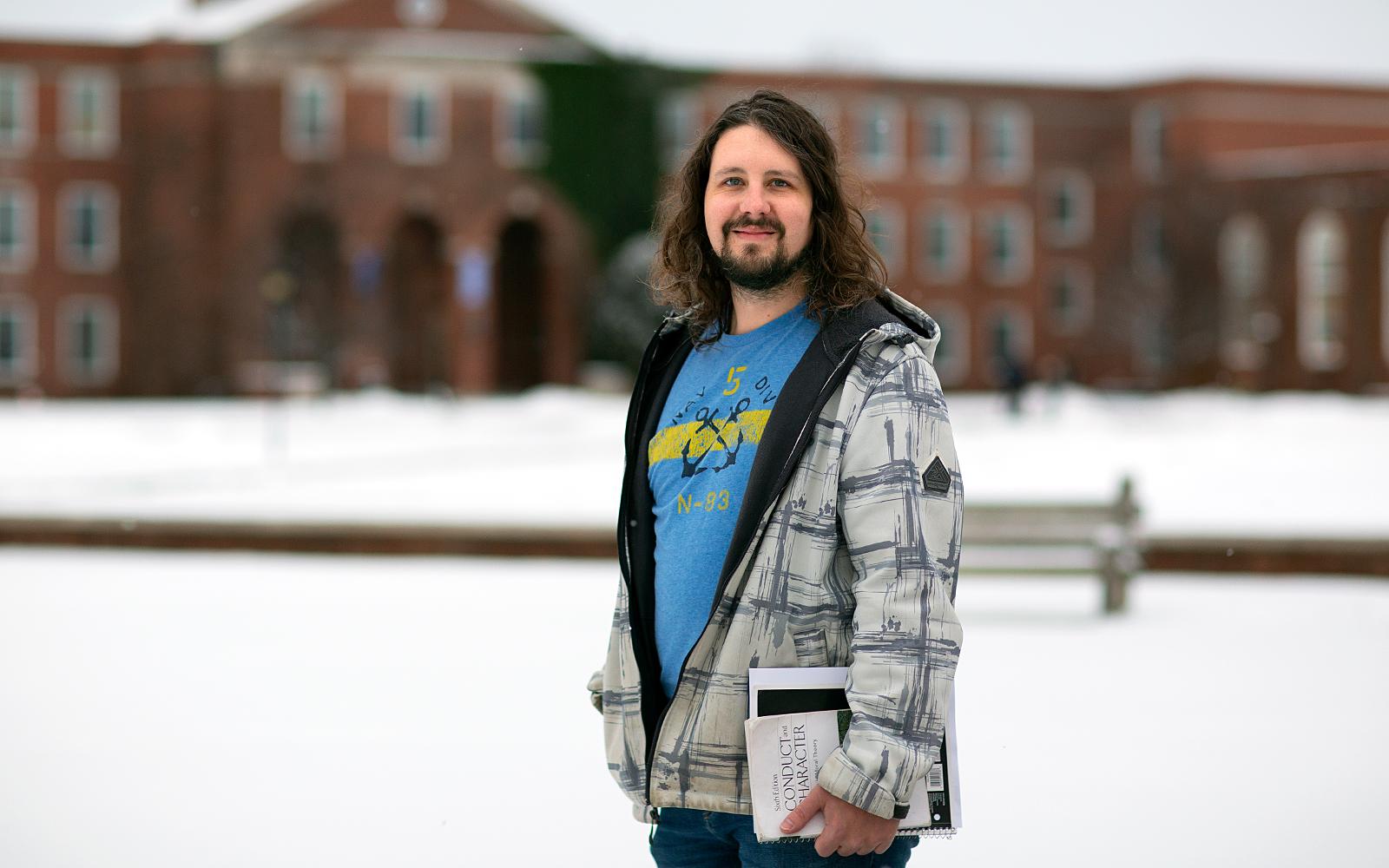 In 2009, he was deployed to Afghanistan with the Marine Aircraft Group 39 out of Camp Pendleton, Calif. For seven months he was stationed in the Helmand province in Afghanistan where he provided care to over 1,000 Marines. He operated a flight line aid station, a clinic built out of military tents along a flight route, and worked as Medevac Corpsman in several Marine Corps helicopter squadrons. He was also responsible for investigating the cause of aircraft damage from collision or combat, and overseeing a mass casualty staging area if a squadron was attacked. On a day-to-day basis, he worked with the helicopter crew to move troops and supplies to forward operating bases, while occasionally caring for injured soldiers until they could be flown back the base hospital.

“I embraced the freedom and responsibility associated with being the sole medical personnel for an entire Marine squadron and gained a wealth of experience not only in medicine but in management,” Bertrand said. “The biggest challenge I've faced so far is transitioning to civilian life and college after the military.”

He finished his military service in 2011, returned to California where he took some classes at Cal State University, and then in 2017 he landed a job at the Claxton Hepburn Medical Center lab back in his hometown of Ogdensburg. Building off of his medical work in the military, and his new position at the hospital, Bertrand set his sights on going back to school to study biology and chemistry.

“SUNY Potsdam was the only school I applied to, as the location and science programs were desirable. I fell in love with this school my first semester,” he said. “Professors like Patrica French, Dr. Fadi Bou-Abdallah, and Dr. Robert Snyder made science not only easy to understand, but intriguing.”

One of the unique aspects of a SUNY Potsdam education is the opportunity for undergraduate students to tackle research projects normally reserved for graduate students. Bertrand jumped at that opportunity when the moment arose for him to work in Bou-Abdullah’s chemistry lab  “I was researching lead detection in drinking water via gold nano-particles,” Bertrand explained.

As a non-traditional transfer student, Bertrand has had the added challenge of readjusting to college life after serving in the military for many years, and SUNY Potsdam’s Veteran Support Services has been a great source of assistance during the transition. “Jeff Gerrish (Veteran Services coordinator) is one of the most proactively supportive Veteran's advocates I've met, always willing to go out of his way to help in any way,” Bertrand said.

Reinforced by his real-world accomplishments in the U.S. Navy, and his work experience at the Claxton Hepburn Medical Center lab, Bertrand has thrived at SUNY Potsdam where he has maintained a 4.0 GPA. As he wraps up his degree in biology and chemistry, he’s looking ahead to the future. This spring he will be applying to medical school where he plans to parlay his success at SUNY Potsdam into a lifelong career.

For more information about the Department of Biology, visit: https://www.potsdam.edu/academics/AAS/depts/bio

For more information about the Department of Chemistry, visit: https://www.potsdam.edu/academics/AAS/depts/chem