When Adam Smith ’15 entered SUNY Potsdam his freshman year, he never imagined that he would be backpacking throughout the Adirondacks or scaling walls of ice and rock. He did all of that and more through the wilderness education program. The leadership skills he learned set the stage for a successful career in outdoor education. Now he’s come full circle, back at SUNY Potsdam as an instructor in the same program where he was once a student.

“I had never been in a tent until I came to Potsdam. I came here and went on a backpacking course and I declared my minor after that,” Smith said. “I developed the skills to give me jobs in the outdoor industry. I’m pretty grateful that I ended up at SUNY Potsdam.” 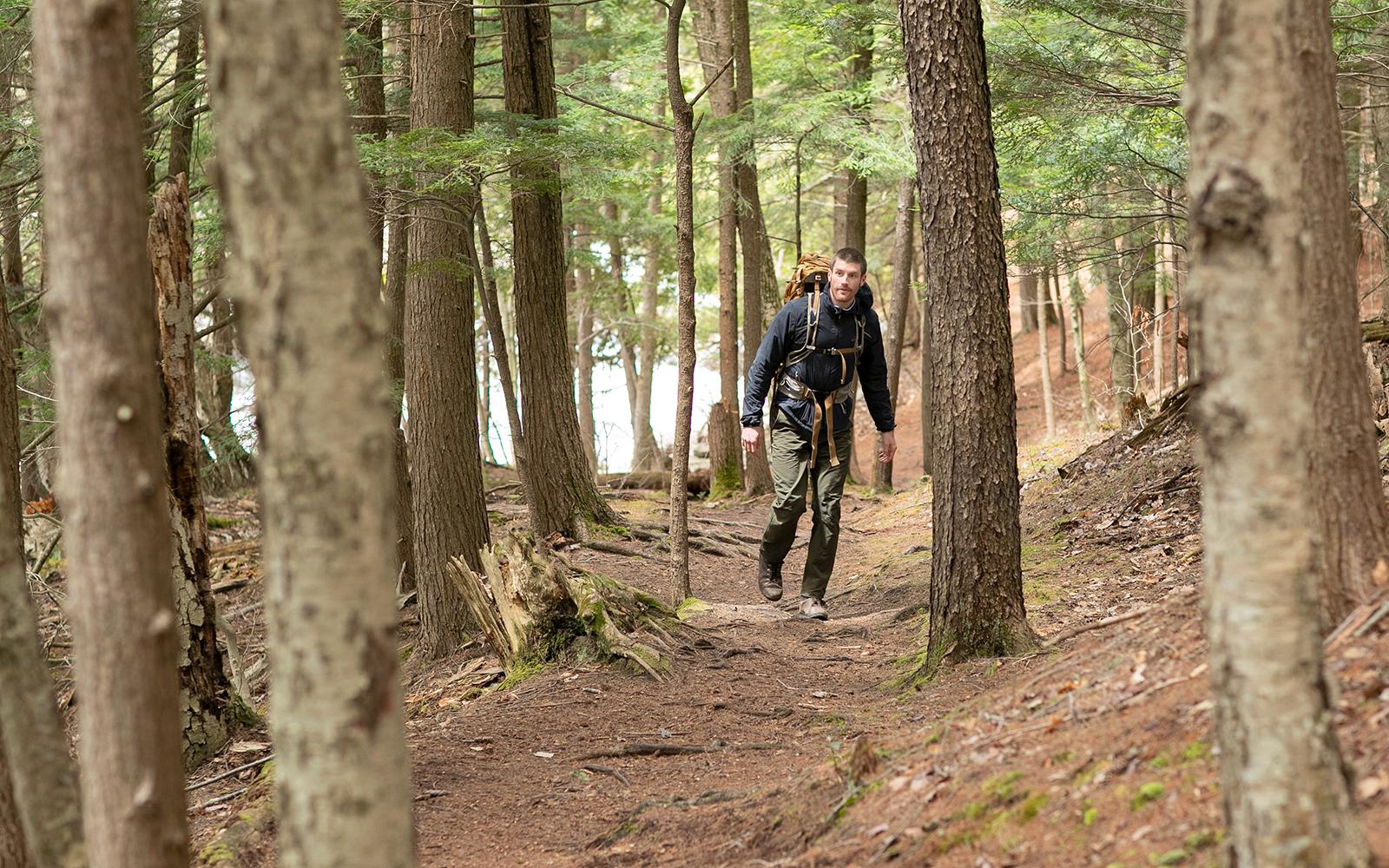 As a student in the wilderness education leadership track, he learned how to make decisions in remote settings, manage risk, and lead groups off the beaten trail. Adam Wheeler, the lead instructor in the program, became his mentor. “Adam would encourage me to take my own trips, he encouraged me to step out of my comfort zone and he would give me his own gear to do so,” Smith said. “My senior year I went to climb Mt. Rainier and Mt. Baker, and he gave us all the gear we needed, out of his own pocket. The ice axes we used were a gift that he and his wife got for their honeymoon.”

Smith also formed a lasting friendship with Jon Ryan ’15. In addition to leading backpacking trips through the program, the pair landed a summer job guiding five-day backpacking trips in the Adirondacks. During weekends, they put all of their energy into rock climbing. “We’d wake up and drive out to the nearest crag and spent two full days climbing. We’d sleep at the base of the crag—just so excited about it,” he said. 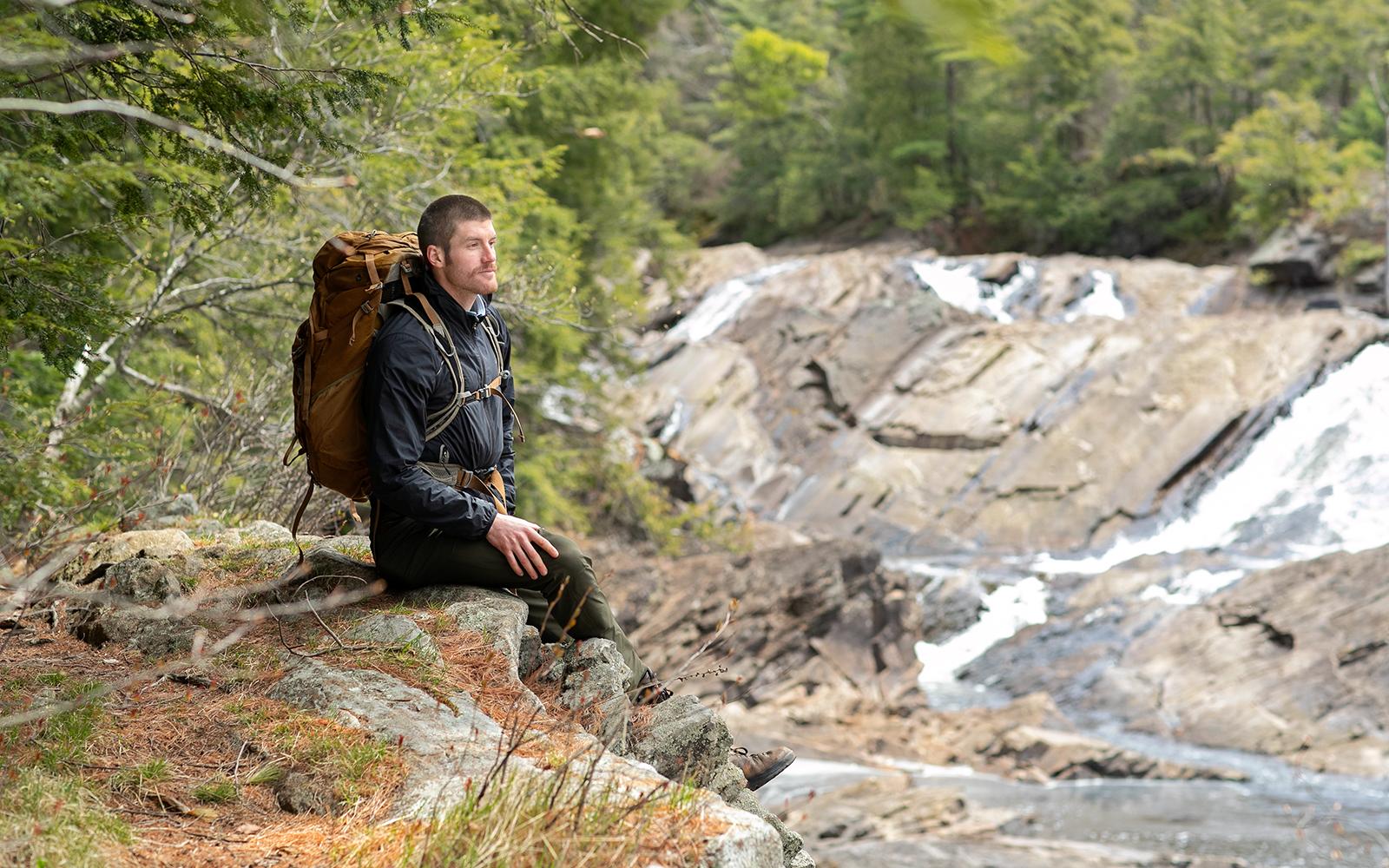 Smith looks out at a waterfall during a hike along the Stone Valley trail.

Back on campus, Smith was also majoring in theatre with a focus on sound design—spending countless hours in the recording studio. For his senior project, he combined his love of audio production and the outdoors, hiking the Cranberry Lake 50-mile trail straight through in 24-hours. Every 15 minutes he stopped to record audio, later combining the snippets of sound into a longer ambient recording from the woods.

After Commencement, he moved to New York City briefly to pursue a potential career in the audio world, before taking a job with SOAR in North Carolina, an outdoor adventure camp for kids with learning disabilities. He led 20-day backcountry trips, and at the end of the summer was offered a position as an expedition field instructor for their boarding school. “We took them all over the country, even internationally to the Yucatan in Mexico,” Smith said. “We went sea kayaking in the Florida Keys and canoeing on the Buffalo National River in Arkansas. We taught high school curriculum to them on the course. It’s a pretty rad program.”

He made his way to Vermont, spent a year with True North Wilderness in a wilderness therapy program, and then moved to Utah to work for Evoke, another wilderness therapy program, the latter of which proved to be a challenging and rewarding experience. “The students live out there in the desert for about three months, totally on their own. They have no tent, just a tarp would be setup at night. Once a week the therapist would drive out to them for a therapy session. Throughout the week, I helped them work on their therapeutic assignments. A lot of them were adjudicated, sent there by the court system,” Smith said.

Then he made his way back east. Wheeler asked him to return to Potsdam to help run a backpacking course. He parlayed that into a more permanent role in the wilderness education program where he now teaches rock climbing and backpacking courses. Smith was in the middle of teaching Leadership I this semester, a course that culminates with a 16-day off trail navigation leadership course in the Adirondacks, when everything shifted to online learning. Now he meets with his students via Zoom.

“I didn’t really think teaching wilderness ed online was possible. What I’m continually struck by is the resourcefulness of the students.  They can take the task of learning outdoor skills digitally and respond with creative and thoughtful assignments,” Smith said.

Smith shares his technique for dealing with the global pandemic.

He recently helped to coordinate a Zoom reunion event for 65 alumni and current students in the wilderness education program. Participants shared personal stories and how the program impacted their lives—everything from whitewater canoeing mishaps in 1995 to online learning this year. What was supposed to last for one hour, ended up being a three-hour session.  Next year, they plan to hold an in-person reunion to celebrate the 25th anniversary of the program. “It felt like family,” Smith said. “It felt good to be with that community in the middle of the quarantine.”

Before the global pandemic, Smith and Ryan were planning a month-long mountaineering trip to climb Denali in Alaska, the highest peak in North America. “We had been on the phone every night trying to plan it all out. There’s a lot of logistics involved—in the flights and shuttles and the air taxis into the glacier, permits,” Smith said. “People say it’s a pretty cool sight to see that basecamp. All the guide parties are up there with their bright neon tents sprinkled across the glacier.”

They planned on spending 15 days acclimatizing, camping at 14,000 and then taking day trips up the west buttress of Denali, before the final push to the summit on a technical route. “It’s definitely out of my comfort zone for sure,” Smith said. “I’ve been working on building a strong aerobic base, spending a lot of time running slowly, and combining that with strength training workouts. Eventually the training gets a little more specific. I’m trying to climb a lot.

In February, Smith teamed up with exercise science faculty to test his VO2 max and aerobic threshold. Inside the exercise lab, Assistant Professor Dr. Chris Torres placed a mask over Smith’s face with a long tube connected to a computer. Smith ran on a treadmill, quickening his pace and pushing his limits as the machine tracked his stats. “The aerobic threshold is important to me because the higher that is, the more I can travel without burning up the lactic acid and move quicker without getting tired. That’s why I’ve been running slow all the time to build that up,” he said. “I’ve never been on a big mountain where I have to acclimatize, so that’s something else I’m excited about, and just being in Alaska.”

His plan was to reach the summit and hold a SUNY Potsdam banner in the air, but for now that will have to wait. With the world spinning to a halt in the wake of Covid-19, the group decided to postpone the trip for a year. “A bright side to postponing the trip is that Adam Wheeler agreed to come along,” Smith said. “The extra year will let Adam, Jon, and I really prepare and train.”