Ever since graduating from SUNY Potsdam with a degree in community health, Missi Wooldridge ’08 has continued to make a positive impact on the world around her—focusing her career on drug policy reform and harm reduction, a movement dedicated to supporting people who use drugs and preventing overdoses.

“I've truly been blessed to be a leader in a movement that I'm passionate about. My message is simple - good people use drugs. We must prioritize drug use as a public health issue rather than a criminal justice issue in an effort to reduce overdose deaths and improve health outcomes for all walks of life,” Wooldridge said. 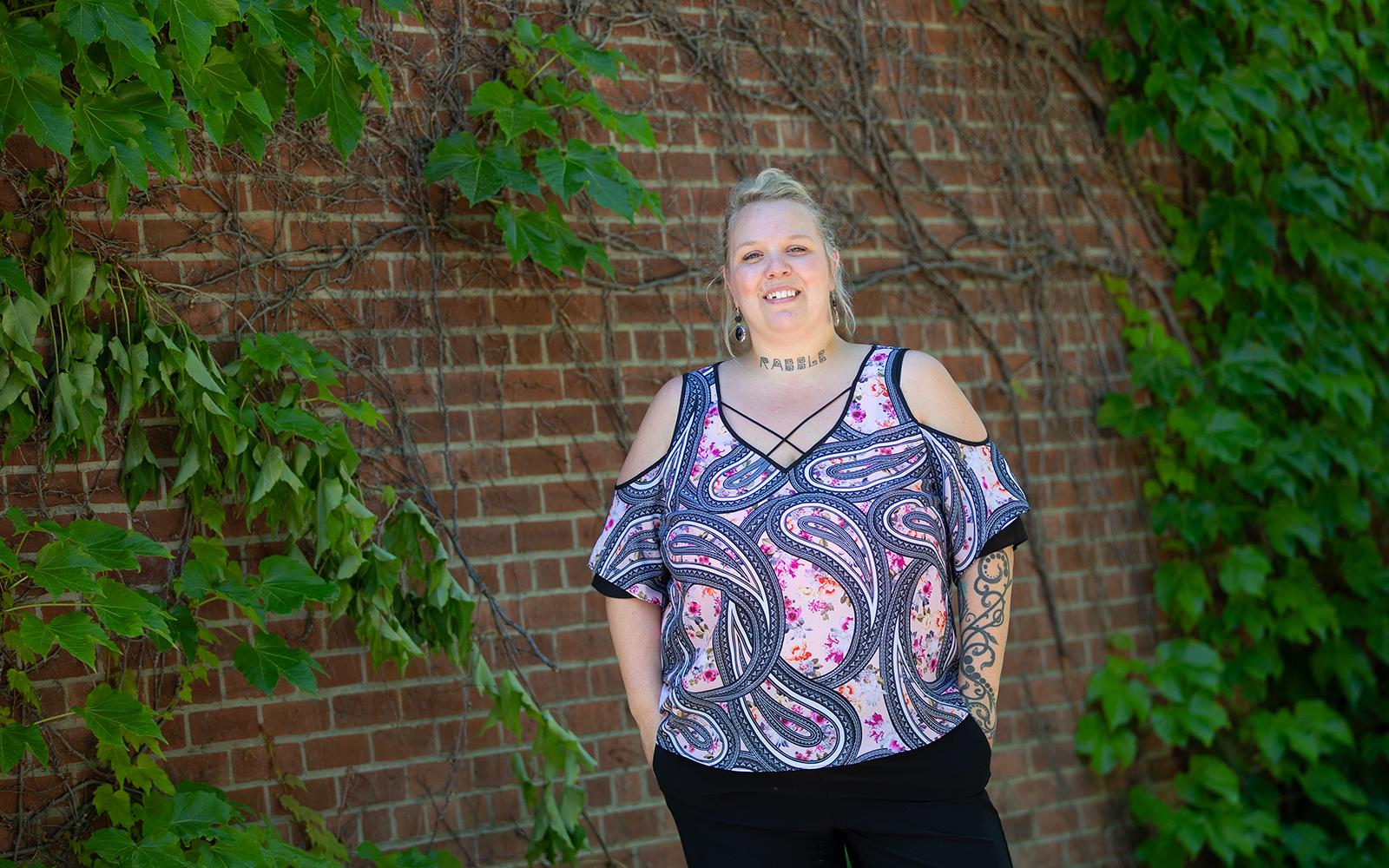 Wooldridge poses for a portrait outside Dunn Hall, where she attended her community health classes when she was an undergraduate student at the College.

“I fell in love with the Potsdam community, and it feels nostalgic and serendipitous to be back. Although, it feels like I never left.”

-Wooldridge on returning to SUNY Potsdam as an adjunct professor

After getting her undergraduate degree at SUNY Potsdam in 2008, Wooldridge completed her Master of Public Health degree at the University at Albany. In 2011, she moved to Denver, Colo., to lead DanceSafe, a non-profit organization that promotes health and safety in the electronic music community. Starting the in the ’90s, DanceSafe was the first group to start drug checking, a process of examining the components of drugs to detect any contamination.

“The organization has been critical in combating the fentanyl crisis in recent years by developing and distributing fentanyl test strips. I loved interacting with young people in these settings, but the most rewarding part of this job was helping people who were having difficult drug-related experiences,” she said. 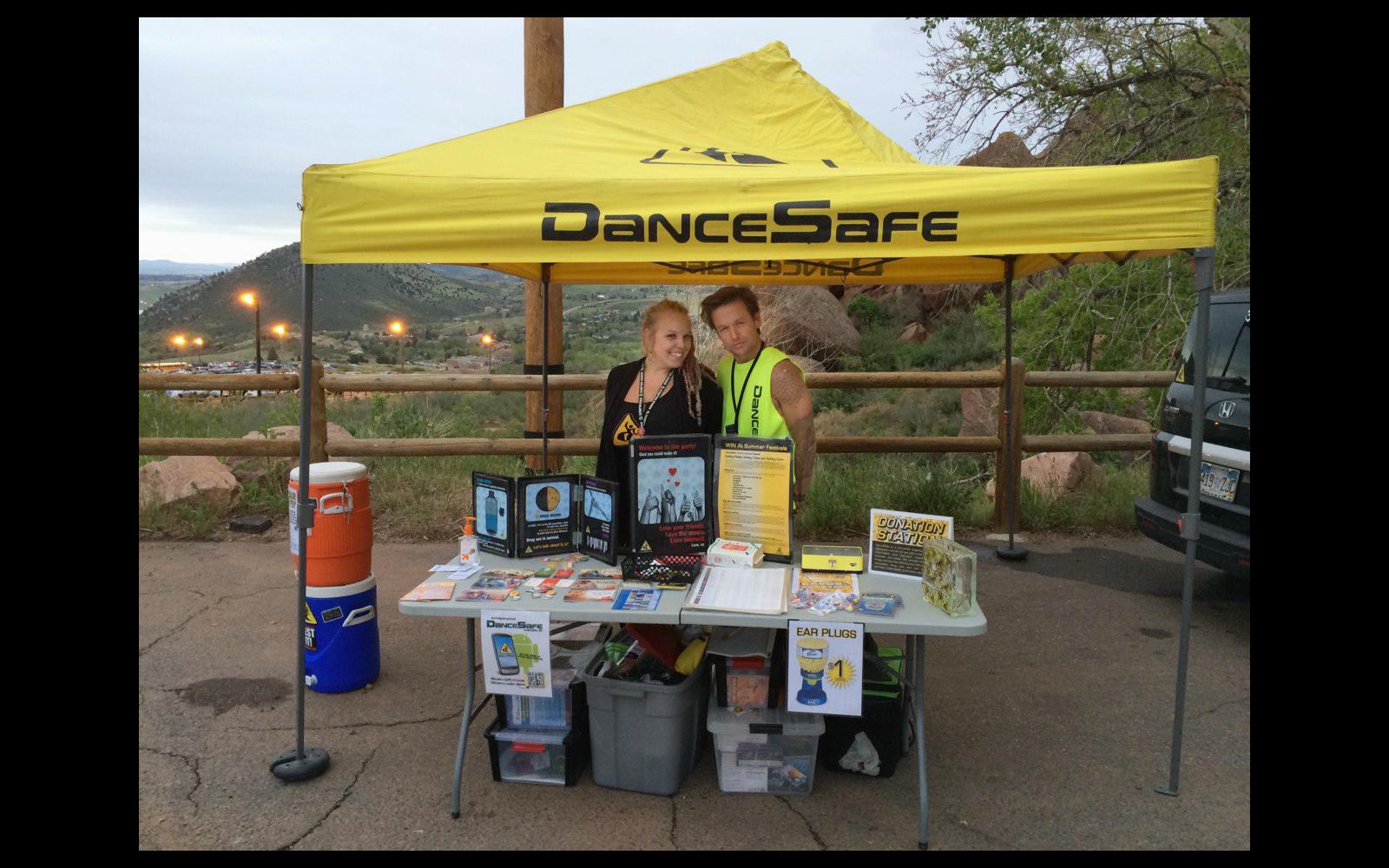 Working with researchers, international leaders, and scientists in the field of psychedelic science, Wooldridge helped to develop policies that support people with drug addiction. Appointed to the Denver Drug Strategy Commission, she chaired a harm reduction subcommittee and then collaborated with peers on subcommittees within the Los Angeles Electronic Music Taskforce.

“I kept pushing harm reduction messaging around adulterants and overdosing, and how people need to check their drugs, but I kept getting shot down,” she said. “Then just last week, there were some overdoses in the Los Angeles area, and the health department put out some harm reduction messaging, and linked to the Dancesafe website and drug checking kits. It’s so powerful to see how you lay that groundwork and then 10 years later, you see it come to fruition.” 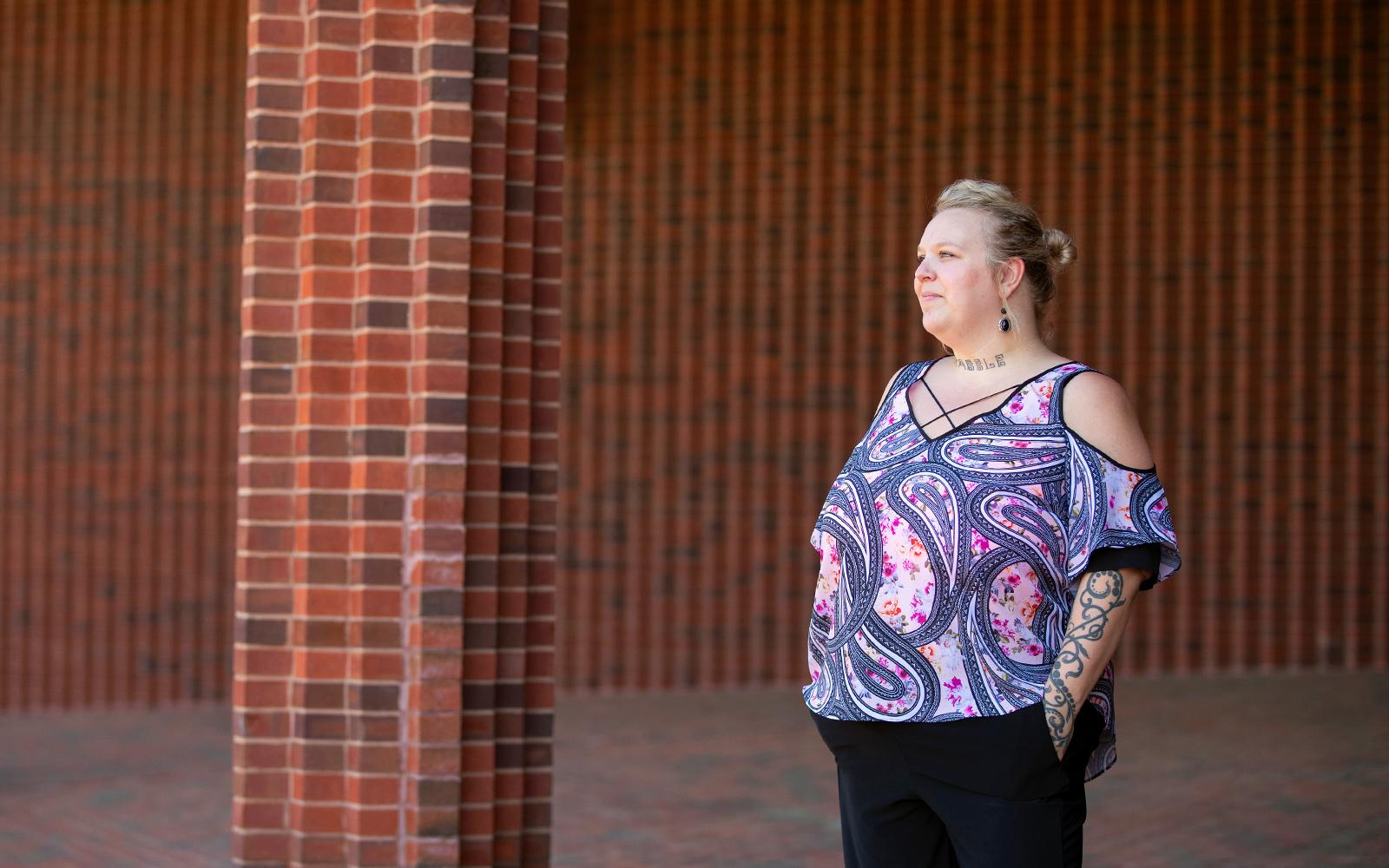 In 2016, Wooldridge branched out on her own, and founded Healthy Nightlife, a consulting firm focused on education, promoting healthy lifestyles, and embracing harm reduction initiatives. She connected with event producers, security teams, and medical personnel at music festivals and concerts around the country, to help them support people at their events, and implement harm reduction principles. That same year she also joined SUNY Potsdam’s Institutional Review Board, helping to oversee the approval process of student and faculty research on campus.

She has been featured in national media outlets ranging from the New York Times, Boston Globe, and the Los Angeles Times to Rolling Stone, Billboard Magazine and Cosmopolitan, as she discusses her public health messaging. She has also appeared on the Katie Couric Show, Al Jazeera: Tech Know, and radio shows around the country. A published researcher in the Journal of Psychopharmacology, she regularly speaks at conferences in the U.S. and Canada, and has flourished in her field—a career rooted in a strong foundation within SUNY Potsdam’s Department of Public Health and Human Performance.

Wooldrige initially chose SUNY Potsdam to pursue a degree in music. Early on, she experienced some academic hurdles, before finding the support she needed in the community health program. “After my sophomore year, I got dismissed from SUNY Potsdam. My grades weren’t good enough, I didn’t know what I wanted to do, and I was dealing with migraines and other medical issues. I appealed to get back in,” Wooldridge said. “I knew that I wanted to educate young people and most importantly, I wanted to help people. That's when I found the community health program.” 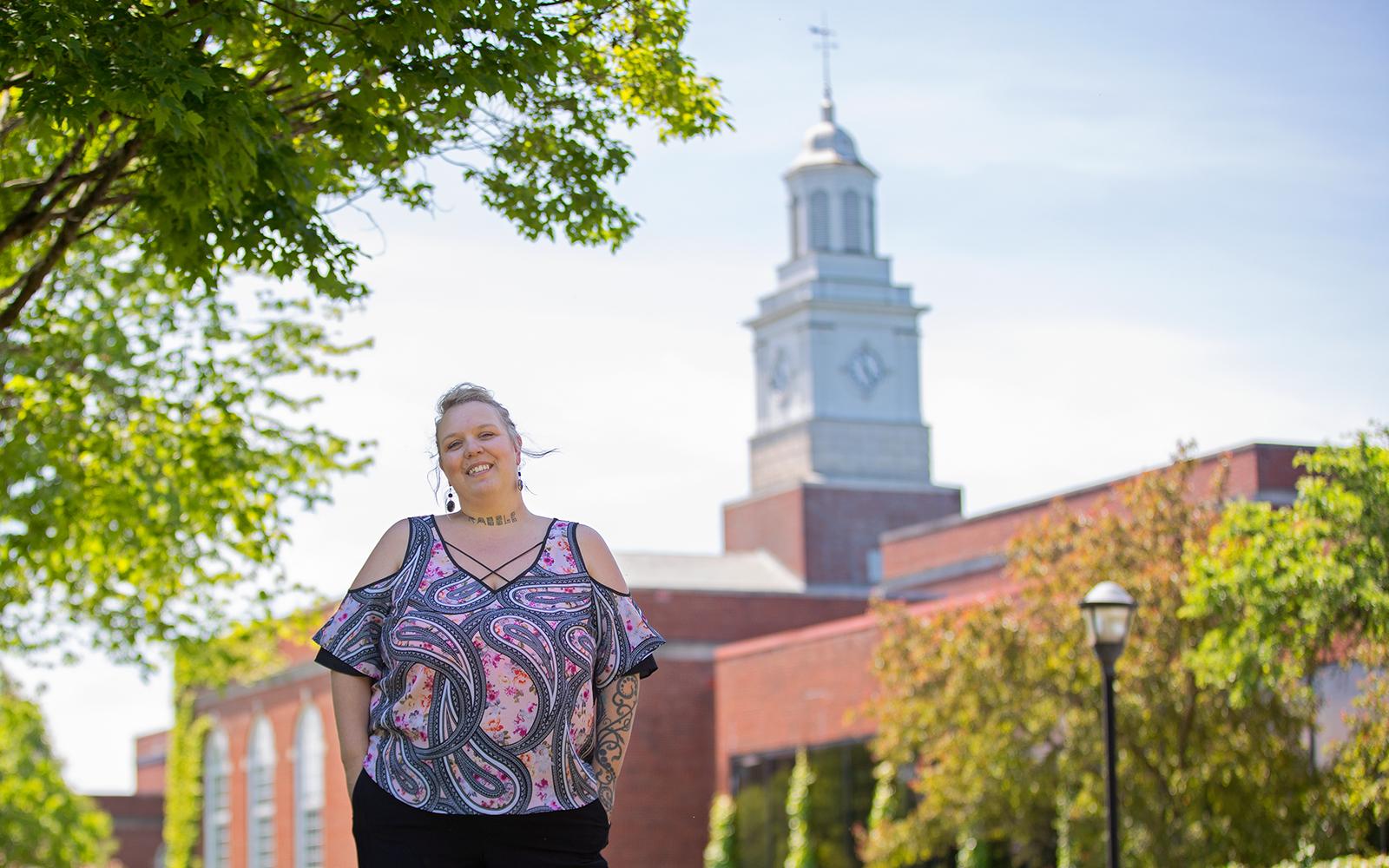 Wooldridge poses for a portrait outside Satterlee Hall, during a visit to campus in June 2022.

After taking an introduction to community health class with Dr. Kelly Bonnar, Wooldridge was convinced that she was on the right path. She served as a teaching assistant and tutor, completed a hands-on internship in the field, and received the outstanding community health award—excelling academically while working closely with her faculty mentor. “Dr. Kelly Bonnar was instrumental in my success here. She supported me in and outside of the classroom and pushed me in ways I'd never been pushed,” she said. Outside of the classroom, Wooldridge co-founded Health and Fitness Advocates, a student group on campus that is still active today.

Fast forward to 2020, and with two degrees and more than a decade of experience, Wooldridge accepted a position as the senior manager of marketing and social impact at Akerna—a software company that supports businesses in the cannabis industry. “I developed and now lead a corporate social responsibility program aimed at giving back and ensuring social equity in the cannabis industry. Additionally, I manage all events and account-based marketing gifting campaigns,” she said. 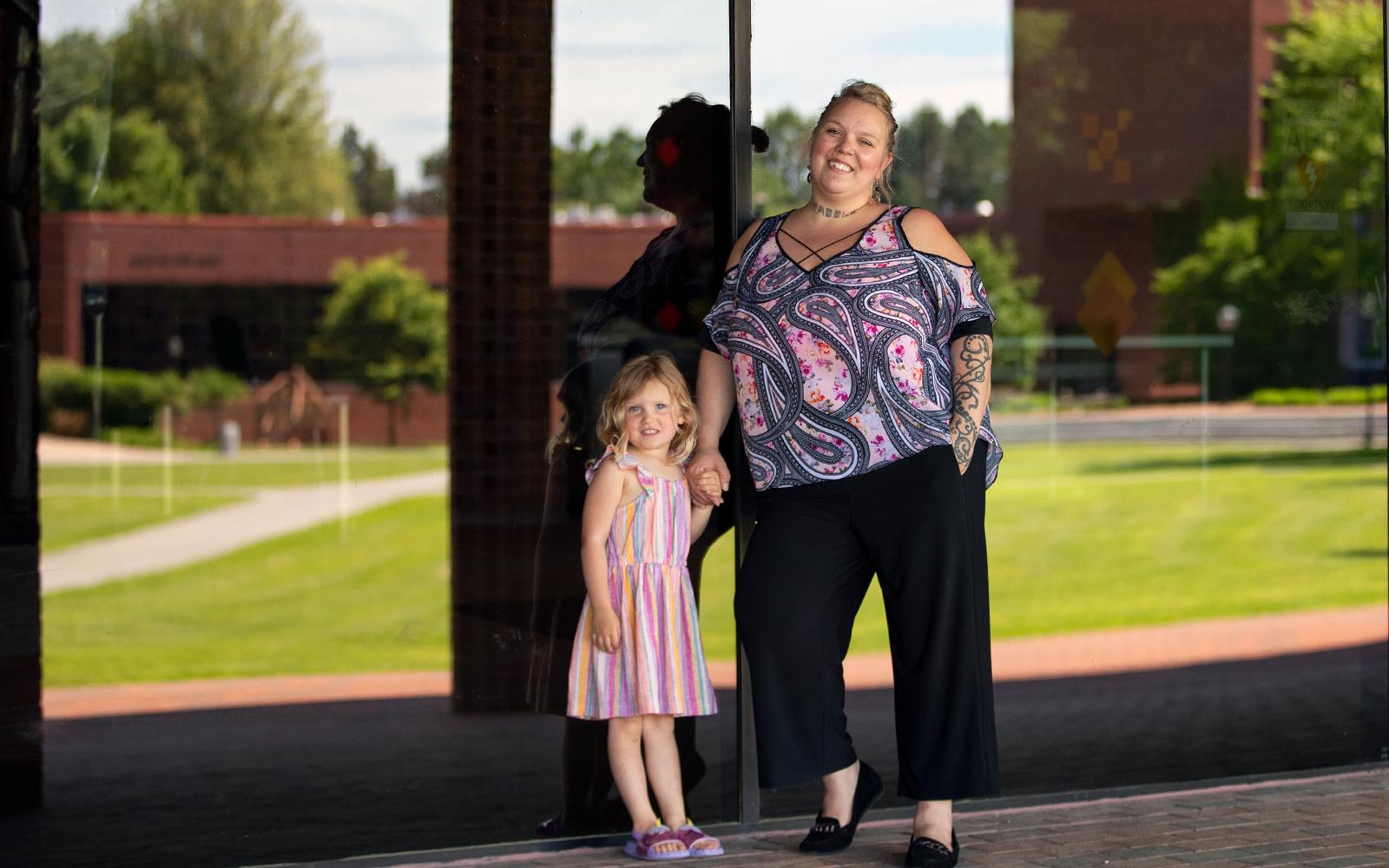 Wooldridge poses for a photo with her daughter Roselynne outside the Lougheed Learning Commons during her visit to campus in June 2022.

Despite working full time, while also raising her four-year-old daughter Roselynne, Wooldridge is adding one more responsibility to her plate, and returning to her alma mater as an adjunct professor in the community health program this fall. Part of SUNY Potsdam’s new, fully online master’s degree program in community health, she will be teaching Theory and Health Communication this fall, and then launching a new Planning Public Health Programs course during the spring 2023 semester—mentoring students who are now in the same place that she once was.

“My goal, as they build on the program and have more electives, is to do something really centered around harm reduction or drug studies, and have a whole course really dedicated to that,” Wooldridge said. “I fell in love with the Potsdam community, and it feels nostalgic and serendipitous to be back. Although, it feels like I never left.”