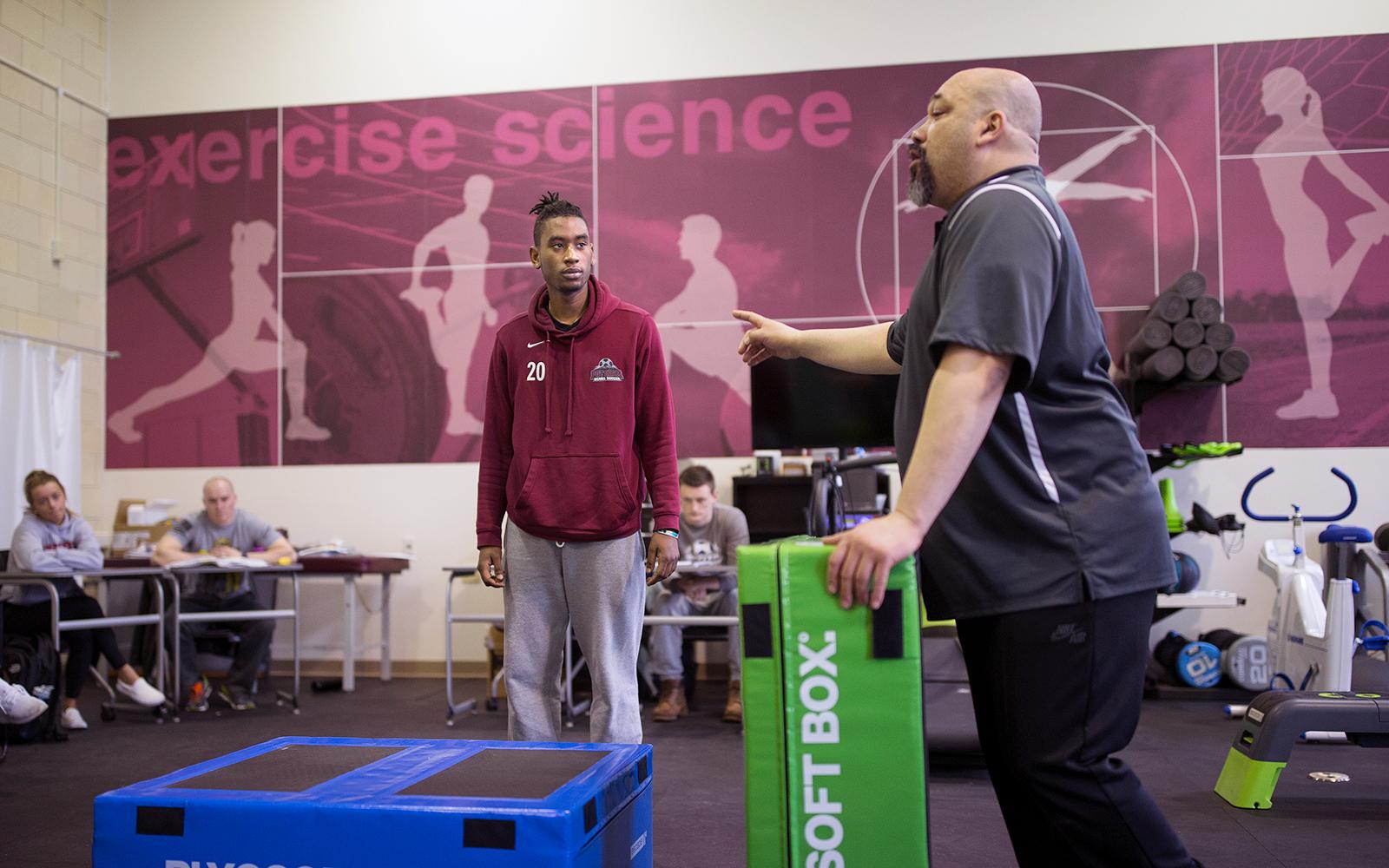 Dr. Christopher M. Torres joined SUNY Potsdam’s exercise science program in the fall of 2016 with the theory of making exercise fun, a philosophy he tries to impart to his students every day. “If you can incorporate play and not say ‘we’re going to do exercise’ but you’re going to say, ‘let’s go to the gym and play,’ you change that mindset. You change that paradigm and all of a sudden, it’s fun again,” he said.

Long before he started working as a professor at SUNY Potsdam, Torres was having fun playing the role of Disney characters at Walt Disney World.  “I got called in to be one of the characters. Based on my height and my weight, I was either Tiger, Goofy or the Beast. It was just a great experience,” Torres said.

His work at Disney was just one of the many positions he held in the hospitality industry in his early years. He worked as a photographer’s assistant, cleaned hotel rooms and worked in restaurants and hotels in other capacities. He also became a SCUBA Divemaster. He started working at a dive shop in Portland, Oregon, a decision which ultimately shaped his future career.

One day, while leaning over to pick up a SCUBA tank, he inadvertently injured his back. “I had strained my lower back to the point where I couldn’t walk. I could barely move. I spent a week literally lying down on the floor. It was even hard to breathe,” Torres recalls.

During his rehabilitation and in talking with his doctor, he became fascinated by the mechanics of the human body. He was intrigued by how micro traumas—from something as simple as lifting a SCUBA tank the wrong way—could cause lower back injuries. His growing interest in human physiology led him to pursue a bachelor’s degree in Community Health Education at Portland State University.

It was there that he got involved in Olympic weightlifting. He was in the midst of trying out for the Olympic team, to represent his home country of Puerto Rico, when he injured his hamstring and lower back again. Not slowing down his career aspirations, he entered the masters and Ph.D. program at The Ohio State University, graduating with a Doctor of Philosophy in Exercise and Physical Activity Behavior.

Now at SUNY Potsdam, he is already making a name for himself. Torres was recently appointed to the National Strength and Conditioning Association's (NSCA) Certified Strength and Conditioning Coach Exam Development Committee. In his new role, Torres will help to develop the national credentialing exam taken by aspiring strength and conditioning coaches, including SUNY Potsdam's own exercise science students. He will also be meeting with the executive leadership team from one of only two official Olympic Training Centers in the country, located adjacent to the NSCA campus in Colorado Springs. The SUNY Potsdam Exercise Science program currently partners with the other official Olympic Training Center, located in Lake Placid, where he takes his students every year.

In the summer of 2018, Torres also spearheaded a major applied learning experience for SUNY Potsdam students in his home country of Puerto Rico. As part of Governor Andrew M. Cuomo’s NY Stands with Puerto Rico Recovery and Rebuilding Initiative, Torres and a group of 30 students, including 16 from SUNY Potsdam, focused on repairing and rebuilding roofs, completing minor repairs and conducting debris removal in San Juan following Hurricane Maria.

In the spring of 2019, Torres was appointed as a fellow in SUNY’s Hispanic Leadership Institute, which is charged with developing and supporting the next generation of executive-level Hispanic/LatinX leaders across the SUNY System. Over the course of the program, Torres has been participating in individualized mentoring, assessment and development programs to support his success.

His continued leadership role at SUNY Potsdam is helping to pave the way for his students pursuing careers in the field of exercise science.  “In the end, I want to be a trailblazer and role model that students from disadvantaged backgrounds can look up to,” Torres said.

To learn more about the Department of Public Health and Human Performance, visit: https://www.potsdam.edu/academics/SOEPS/department-public-health-and-human-performance.