The Man Behind the Music

The otherworldly sound of an orchestra playing Adagio for Strings, or the collective power of musicians on the furious opening to Beethoven’s 5th Symphony can be lost without someone like Dr. Douglas McKinnie, the audio and video streaming engineer at SUNY Potsdam’s Crane School of Music.

Since 2014, McKinnie has been the man behind the music at Crane, capturing high-quality audio from hundreds of performances at Hosmer Hall and Snell Music Theater every year. He not only oversees audio recording, video streaming and archiving of those Crane concerts, but he’s also responsible for maintaining and upgrading audio equipment used by students and faculty on campus. This semester, in the midst of COVID-19, McKinnie is teaching a recording and production class for the very first time, giving music business students an overview of the studio recording process. 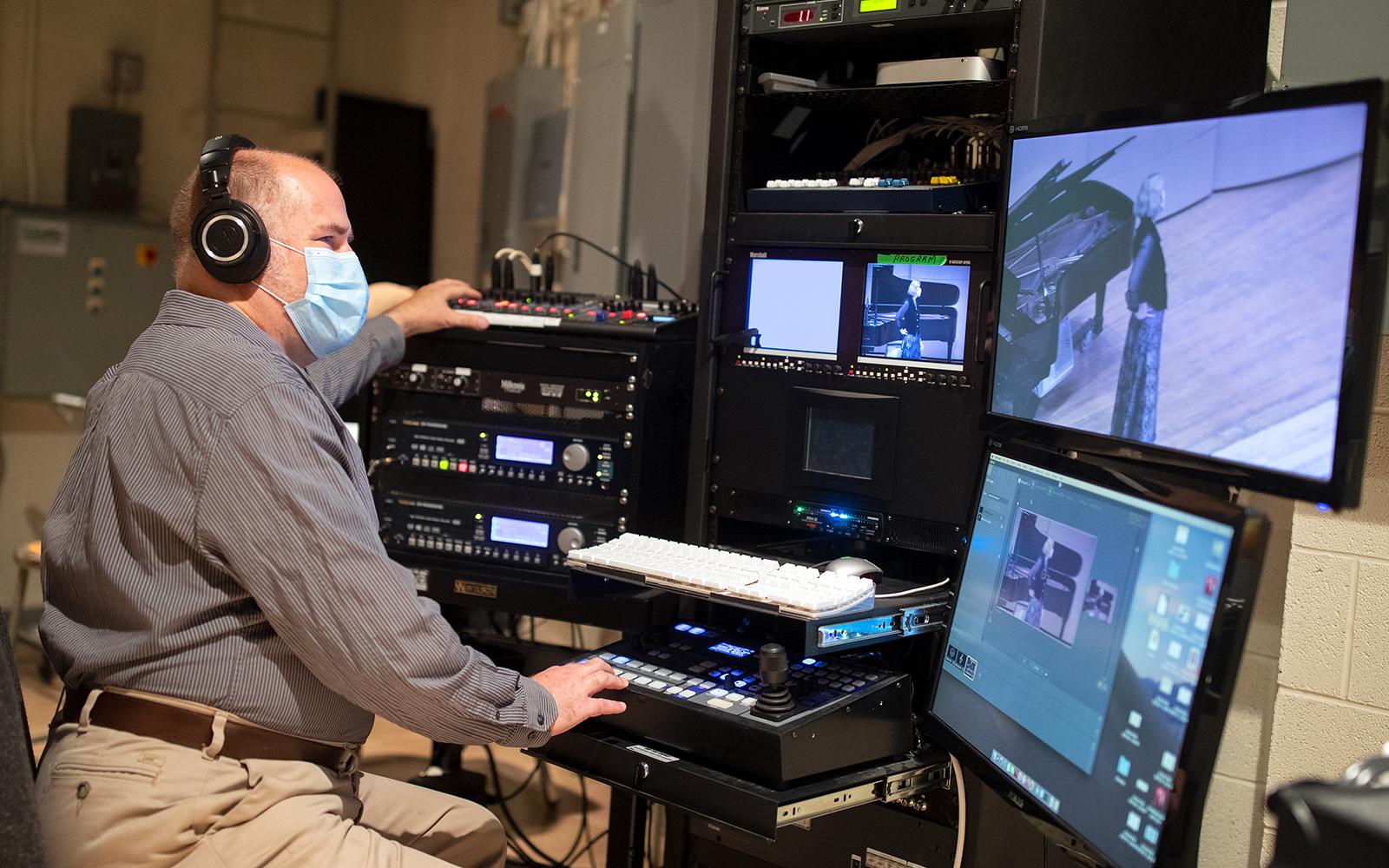 "The Crane School of Music is just an incredibly remarkable place,” McKinnie said. "It's a top music school but it's not in the city. And so, you can get the thing that I like best about the city, but still have all of the benefits of living in a rural area."

McKinnie brings years of experience both as a teacher and audio recording professional to his students. He got his start as a tuba player, and pursued an undergraduate degree from Case Western Reserve University and the Cleveland Institute of Music, through a joint program in Cleveland, Ohio—bouncing back and forth between the two schools depending on whether he was taking music history classes, music theory or tuba lessons. “One of the opportunities that I had there was to take an audio recording class, just like we're teaching here at Crane,” he recalled. “That was really interesting, and I wanted to do more of that.” 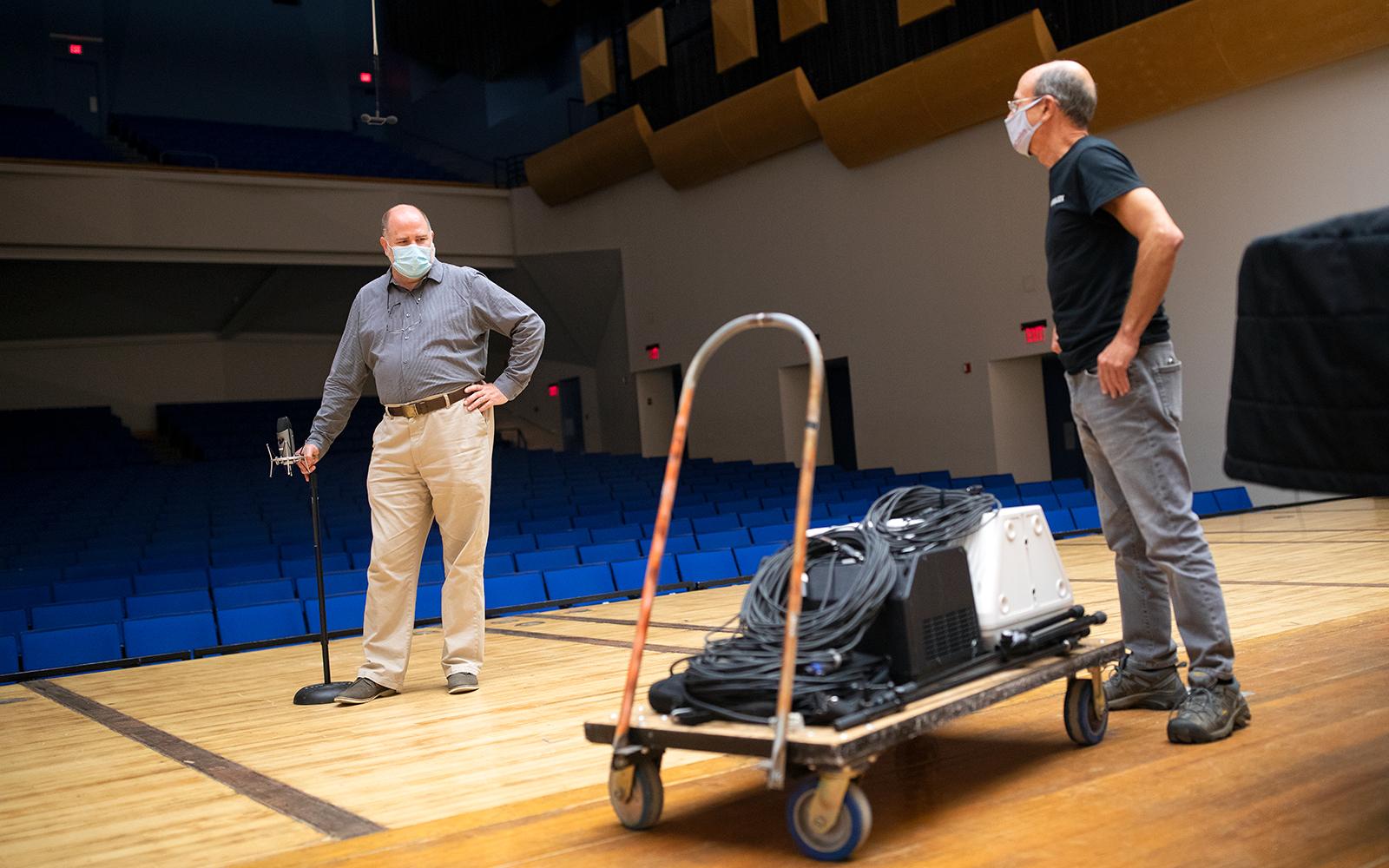 McKinnie removes equipment from the stage after a recording session at SUNY Potsdam's Hosmer Hall.

Latching onto the idea of real-world training, McKinnie discovered a local church with an impressive choir and two organists, and he started recording their performances for weekly radio broadcasts. “That was a great training opportunity,” he said. “They did a lot of rehearsing, and I could try different placements of microphones and work out how best to pick up the balance.”

When he graduated, he landed a full-time position at the Cleveland Institute of Music as an assistant in their audio department. He spent three years mixing orchestra and opera performances for radio broadcasts, as well as spending a significant amount of time archiving their recordings. Despite all of this hands-on training, he still felt like there was a lot more to unearth. McGill University in Montreal surfaced as a top option for graduate school, and in 1991 he enrolled there to pursue a master’s degree in sound recording. As part of his graduate work he conducted research on radio broadcast sound quality for the Canadian government at the Communications Research Centre Canada. “I kind of extended my master’s degree because I spent a whole year and a half doing full-time research in a lab in Ottawa,” McKinnie said. 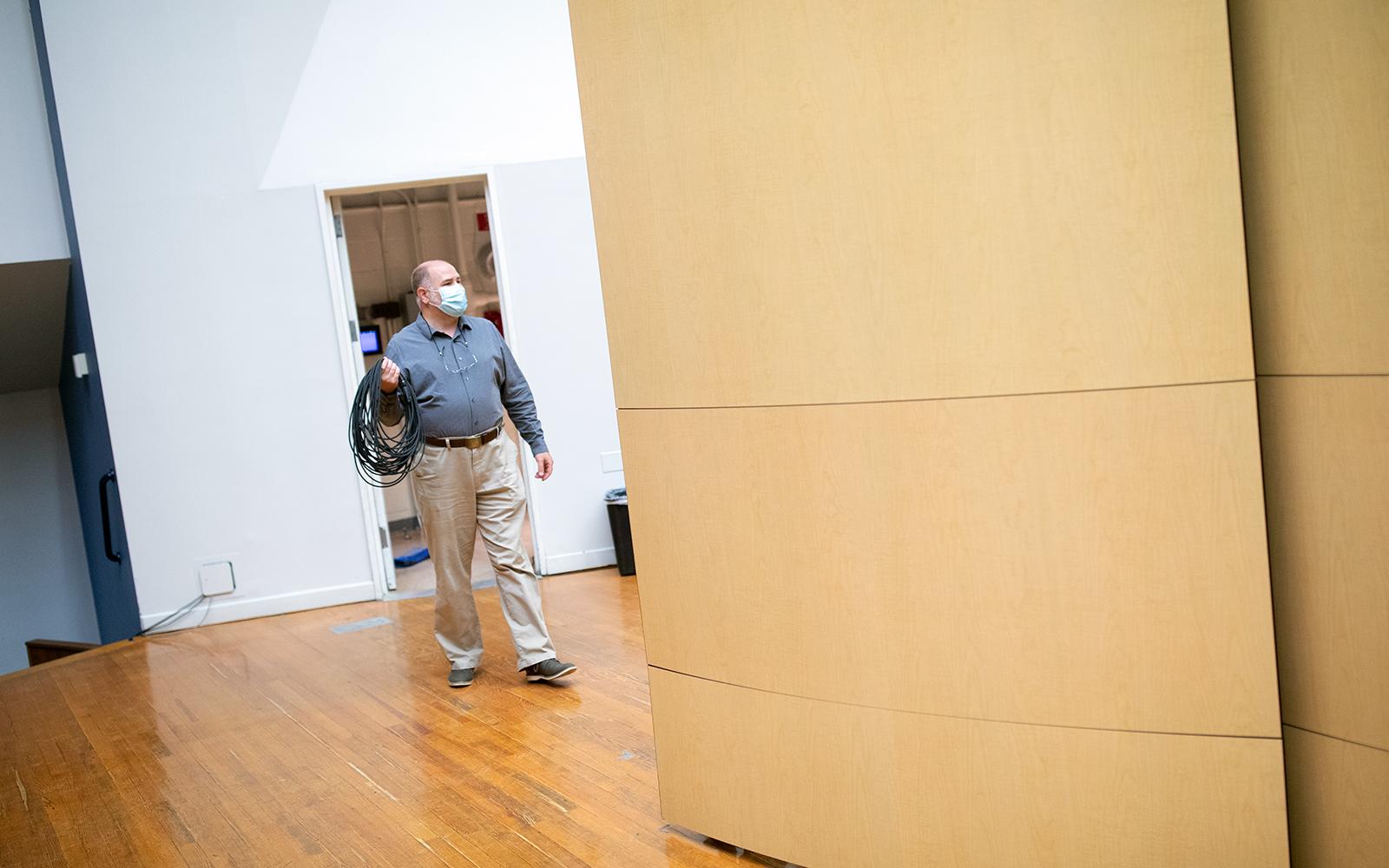 At that time, he also landed a job as an assistant audio engineer at Tanglewood, the summer music venue for the Boston Symphony Orchestra (BSO) in Lenox, Mass. Spending most of the year in Montreal or Ottawa, he worked feverishly through the summer months on the 529 acre Tanglewood campus in the Berkshire Hills. In 1995, McKinnie was promoted to chief engineer of live sound at Tanglewood, a leadership position he held for almost 20 years.

Warm Saturday evenings welcomed throngs of people to the lawn outside the Koussevitzky Music Shed. And as the BSO tuned their instruments on stage, the audience would spread out their blankets, pour glasses of wine, and listen to symphony under the stars—all amplified under the guidance of McKinnie.

“It's a pavilion that seats 5,000 people, and there can be another 10 or 12,000 out on the lawn,” he said. “Anyone who is sitting out on the lawn was hearing a blend of the sound rolling out naturally from the stage and what we were providing for them from the loudspeakers. There are a lot of things that are really loud already that we don't need to amplify, but other things that we do. When the oboe solo happens, we're ready to make sure that people hear the first note.”

McKinnie’s continued dedication to Tanglewood summer after summer, still left a significant part of the year to pursue other projects. So, after getting his master’s degree from McGill, he set his sights on a Ph.D. program in England, working with Francis Rumsey at the University of Surrey. He conducted research on surround sound, funded by the BBC. At the time, the viability of surround sound for radio and television was being explored, and as part of his doctoral research, McKinnie traveled to music performances with BBC engineers and setup microphones to record groundbreaking surround sound mixes. “Some of those ended up being demo reels that were played for the Queen and nobody else,” McKinnie shared. “Some of them ended up being part of productions. It was fantastic. I was able to write some nice reports about effective use of surround sound.” 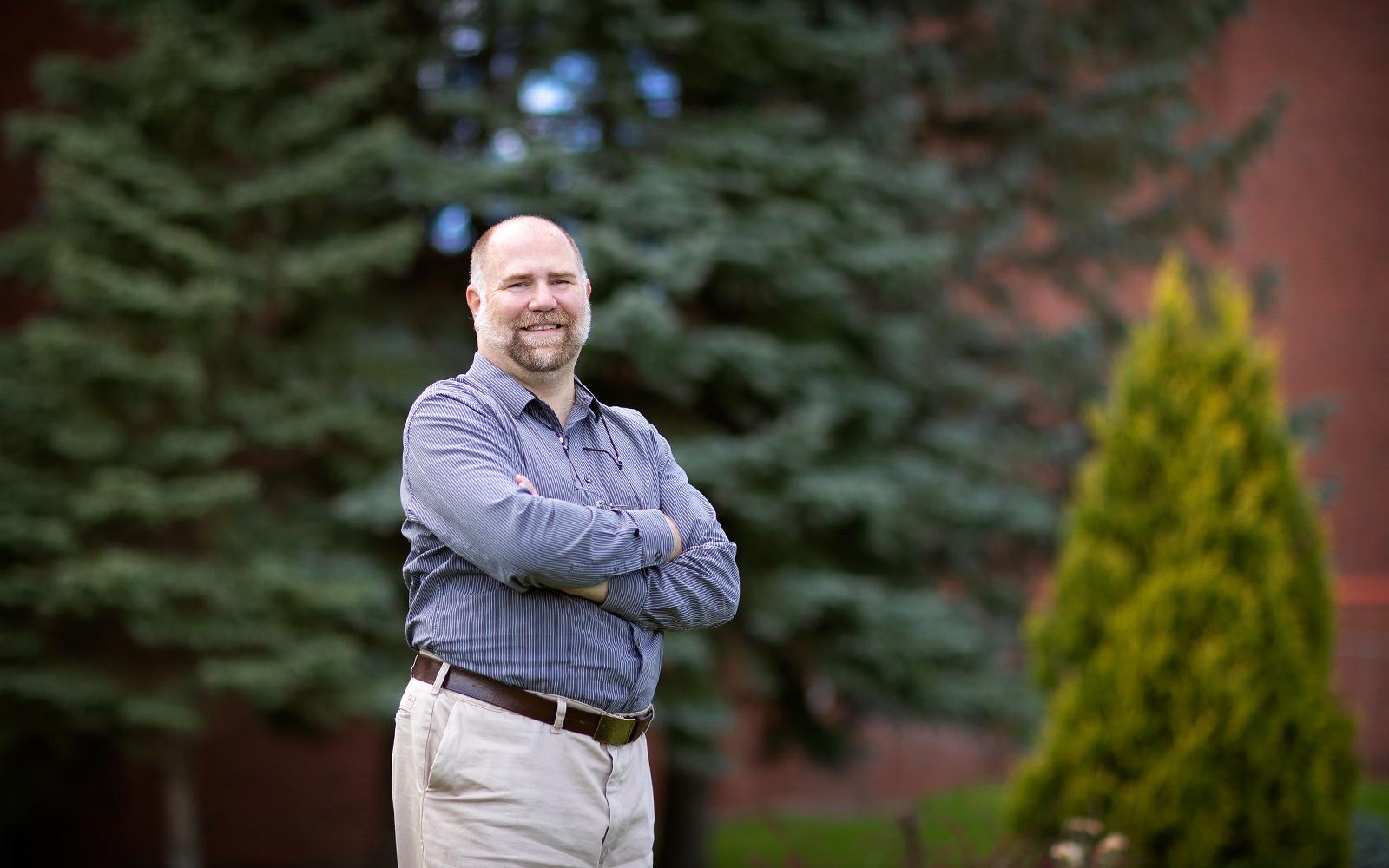 McKinnie took his time to complete his Ph.D. over an eight-year period, as he jetted back and forth between the U.S. and England, while also working on collaborative recording projects all over Europe. “I know for a lot of people that the degree is the destination, but for me, the journey was the destination,” he said. “I was having the time of my life. I was really enjoying the work and earning enough in the other work I was doing to pay my room and board. Being a professional graduate student for that long is not a great way to build up your retirement savings, but it was a nice life for me.”

In 2014, McKinnie joined the faculty at SUNY Potsdam’s Crane School of Music, where he continues to balance teaching and audio production work, with his summer obligations at Tanglewood, now as an audio engineer. “I really love Potsdam and although I have been working in arts and classical music my whole life, the Tanglewood situation is this wonderful thing where you can live your life in nature, in a rural area, and yet have a big city symphony orchestra to work with,” McKinnie said. “It’s the same thing here at Crane. It's a top music school but it's not in the city. And so, you can get the thing that I like best about the city, but still have all of the benefits of living in a rural area. The Crane School of Music is just an incredibly remarkable place.”