While cleaning out a shuttered Catholic school as part of a summer janitorial position in his youth, Dr. Lonel Woods discovered a large record collection destined for the trash. His quick inquiry about it with the priest set in motion another fate for the vinyl collection, and Woods wasted no time boxing them up and taking them home.

“I got all of these music appreciation records that teachers would use in the classroom, George Solti and all of these operas with Andrew Collis. I carried as many as I could away from there. It was sort of like serendipity and divine providence at the same time,” Woods said.

Back at his childhood home in Chicago he played the role of a conductor, waving his arms in rhythm as the music poured out of the speakers. “I was listening to records and conducting them, I felt like I was being called to be to be a conductor of some kind,” he said. Woods was also listening to the weekly Metropolitan Opera radio broadcasts from his brother’s stereo, singing every part during the Saturday afternoon broadcasts, and further reinforcing his love for music.

“Before then, I thought I was going to be a priest or a social worker or something like that, and then when I discovered music I said, ‘Well, maybe this is going to be a path for me,’” he said.

Woods has had an illustrious career as opera singer, Broadway actor, and music educator—the latter of which has been his greatest passion, with 12 years as a dedicated professor of voice at SUNY Potsdam’s Crane School of Music. He was recently selected as the interim dean of The Crane School of Music, but his path to success started back in Chicago. 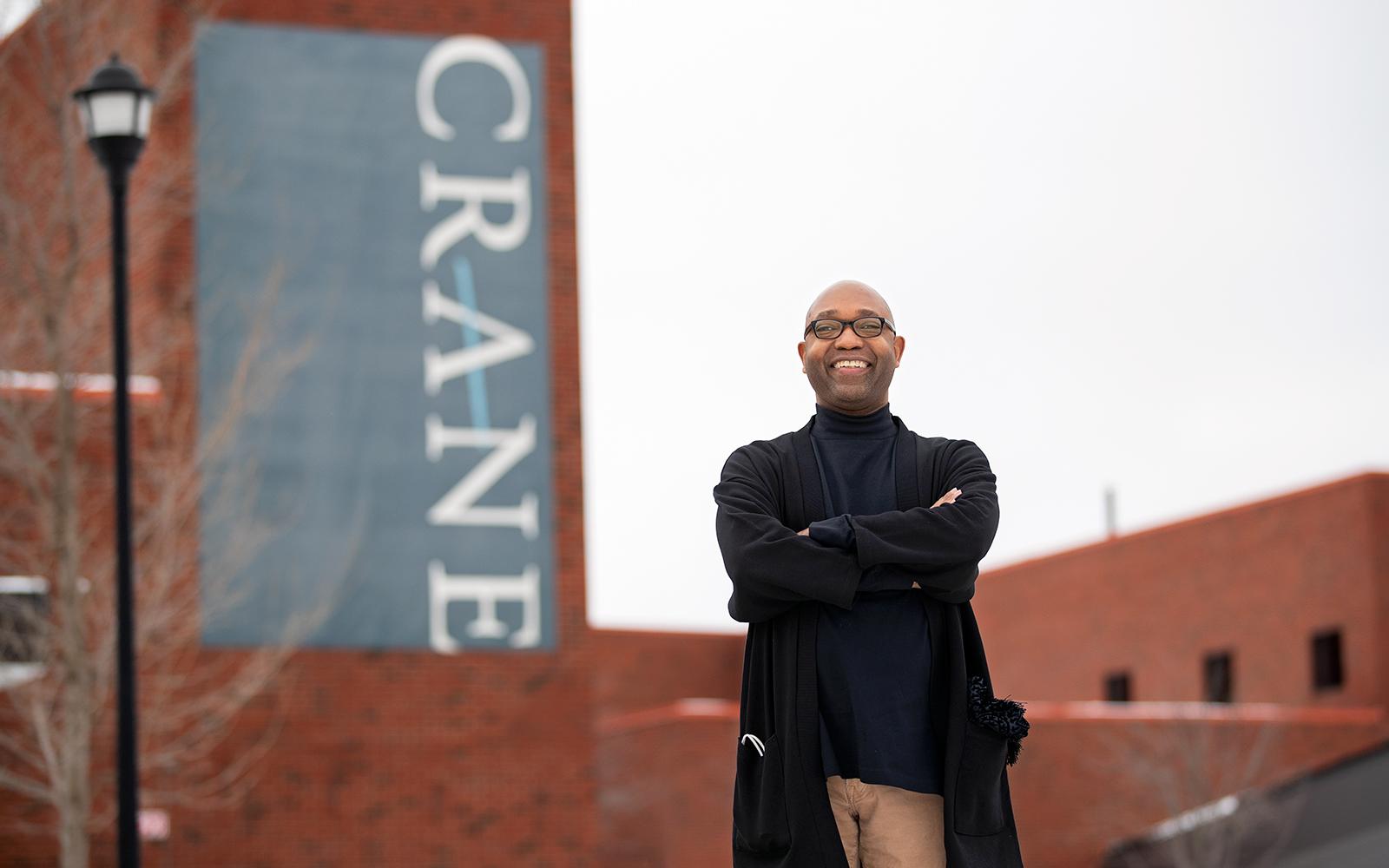 Never losing his childhood passion for music, Woods enrolled at DePaul University to pursue a degree in music education. While primarily focusing on becoming a music teacher, he heard about his classmates auditioning for the Lyric Opera of Chicago and the Chicago Symphony Chorus. “As a junior, I thought, ‘Well, that sounds like something I'd like to do. I like singing in choir.’ And by some amazement, I got into the Chicago Symphony Chorus with all these professional singers, and then I got into Lyric Opera the next summer,” Woods said.

His senior year, he quickly lined up his first job as an elementary school music teacher in Aurora, a suburb of Chicago. Woods was challenged with language barriers and student behavior issues, all of which were blessings in disguise that sharpened his skills as an educator. “I still rely on everything that I learned there. I used to keep a Spanish dictionary on my desk, because the kids didn’t speak English in some of my classes,” Woods said. “I learned how to manage a class there, I learned how to really sequence a lesson, all fundamentals of teaching.”

During his third year in Aurora, Woods heard about open auditions being held in Chicago for the Broadway musical “Showboat.” He drove down to the city, and when they offered him a role, he couldn’t turn it down. “I even debated not doing it, and some of my music friends said, ‘This show is going to Broadway, you have to do it,’” Woods recalled. “Showboat” was staged in Toronto for the first year, before moving to New York City. The production then returned to Chicago for a seven-month run. From there, Woods lined up a role with the Houston Grand Opera as they staged “Porgy and Bess.” “I auditioned for the international tour and was just going to do that, but this was during the AIDS epidemic and someone in the show was sick, so I stepped in for two months to finish the U.S. part of the tour, and then I went internationally,” he said. Showing up in the middle of the tour was challenging. He only had three days of rehearsals to learn the entire role, working with just the pianist and stage director to perfect his part. During the next year, he moved from city to city, first performing on stage in California, Oregon, and Washington, and then traveling to Japan and Paris.

When he returned home, Woods decided to pursue a master’s degree in vocal pedagogy at The Catholic University of America. “The science of singing and the physiology of the body has always been very important to me,” he said. “I never truly wanted to be a performer, I liked doing it and I fell into it, but vocal pedagogy was my passion.”

He spent the next eight years in Washington, D.C., first getting his master’s degree and then landing a teaching position at Georgetown Day School. He loved working at the private school, and he would spend his free time as a comprimario singer with the Washington Opera at the Kennedy Center. “If I needed to do performances during the day, they were quite proud to be able to say for recruitment, ‘Our middle school choir director has to go off and perform at the Kennedy Center.’ They were very good to me,” Woods recalled.

Woods wanted to keep advancing in his career, so he applied to several doctoral programs and chose the University of Michigan in Ann Arbor for a degree in vocal performance. Mirroring his approach from Chicago and D.C., he joined the Michigan Opera Theatre, a professional opera company based in Detroit. Once he received his Doctor of Musical Arts degree, he started teaching at Spring Arbor University as an adjunct professor, while continuing to sing with the opera company. In 2009, he joined SUNY Potsdam’s Crane School of Music, and he has never looked back.

“This really is an institution of caring people, caring and committed faculty, and students that are invested in that type of relationship. There's a reason to choose Crane versus choosing a Juilliard—you're going to get a very different experience, and it is not necessarily about technique, it's about all the other stuff that comes with it,” Woods said. 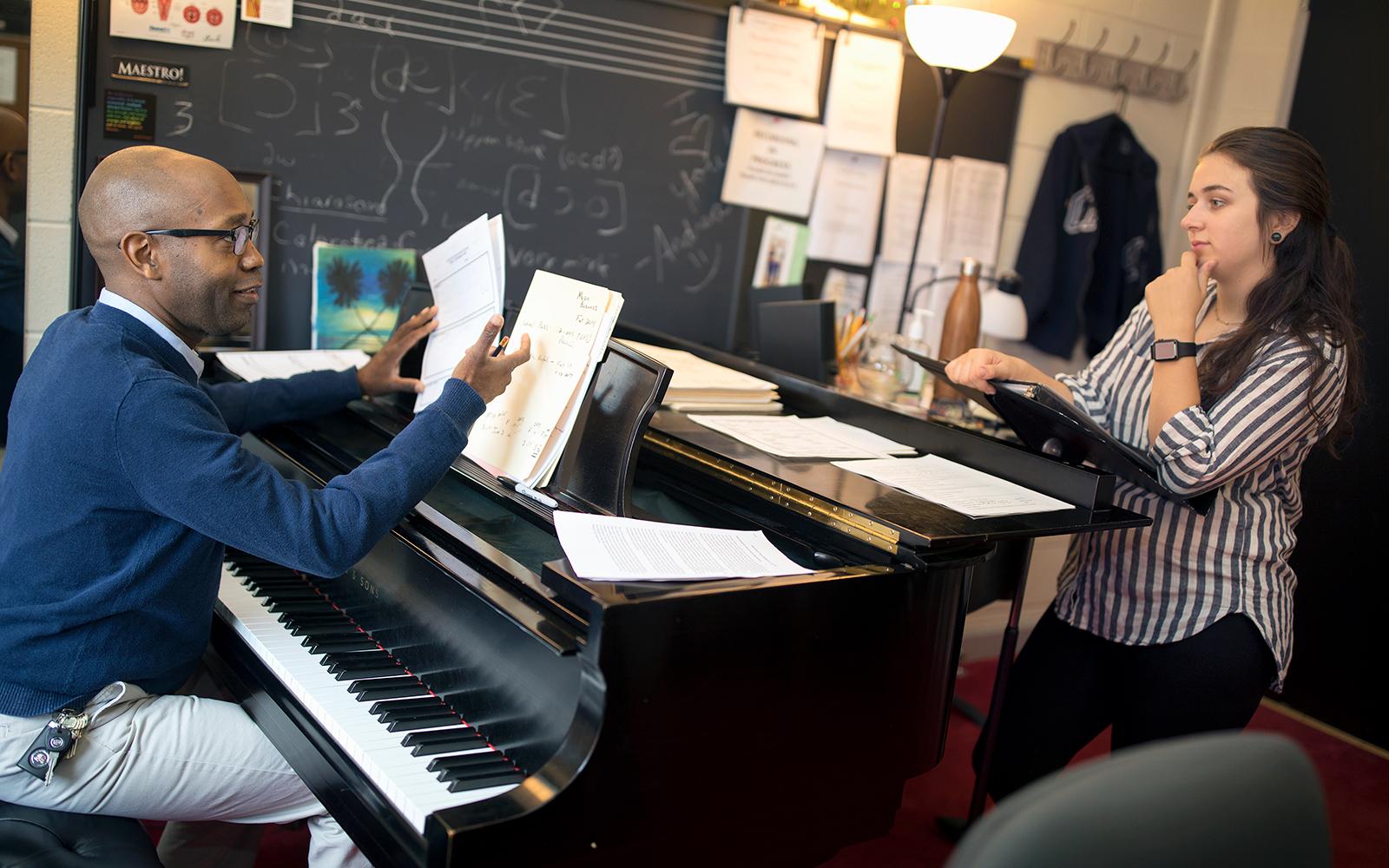 Woods works with Johnna Bernard ’18, one of the many students who Woods has mentored over the years.

For the past 12 years, his uplifting presence at SUNY Potsdam’s Crane School of Music has been a source of inspiration for students pursuing degrees ranging from music performance to music business. Faith has also played a significant role in Woods’ life as he regularly attends Mass, conducts the choir, and sings at St. Mary’s Catholic Church in Potsdam, something that he said has kept him sane during the pandemic. “Even when I was singing at the opera companies and on Broadway, I still went to church and I still sang as a volunteer sometimes, most of the time as a paid soloist,” Woods said. “It calms me, relaxes me, and rejuvenates me.”

Finding peace was all the more important in the face of his ongoing health issues in 2020. For several years Woods has been battling kidney disease, and spending hours a day undergoing self-administered dialysis. In April 2020, in the midst of the pandemic, Woods received a lifesaving call from Upstate University Hospital with news of a positive kidney match. With no time to waste, he rushed down to Syracuse for surgery, arriving around 7 a.m., for what would be a five-hour operation later that day. He spent four days in the hospital, and despite just getting out of the operating room, Woods mustered enough strength to lead an online lecture for his students from his hospital bed.

He continued to recuperate throughout the year, and teach online classes throughout the pandemic. At the beginning of 2021, Woods was selected as the new interim dean of SUNY Potsdam’s Crane School of Music. Despite his new responsibilities, he will continue working one-on-one with 10 Crane students in his voice studio, three of which are first-year students who chose Crane specifically for his mentorship. “I can’t abandon them, and especially with my approach, with the way that I teach studio, I build this relationship with them,” Woods said. 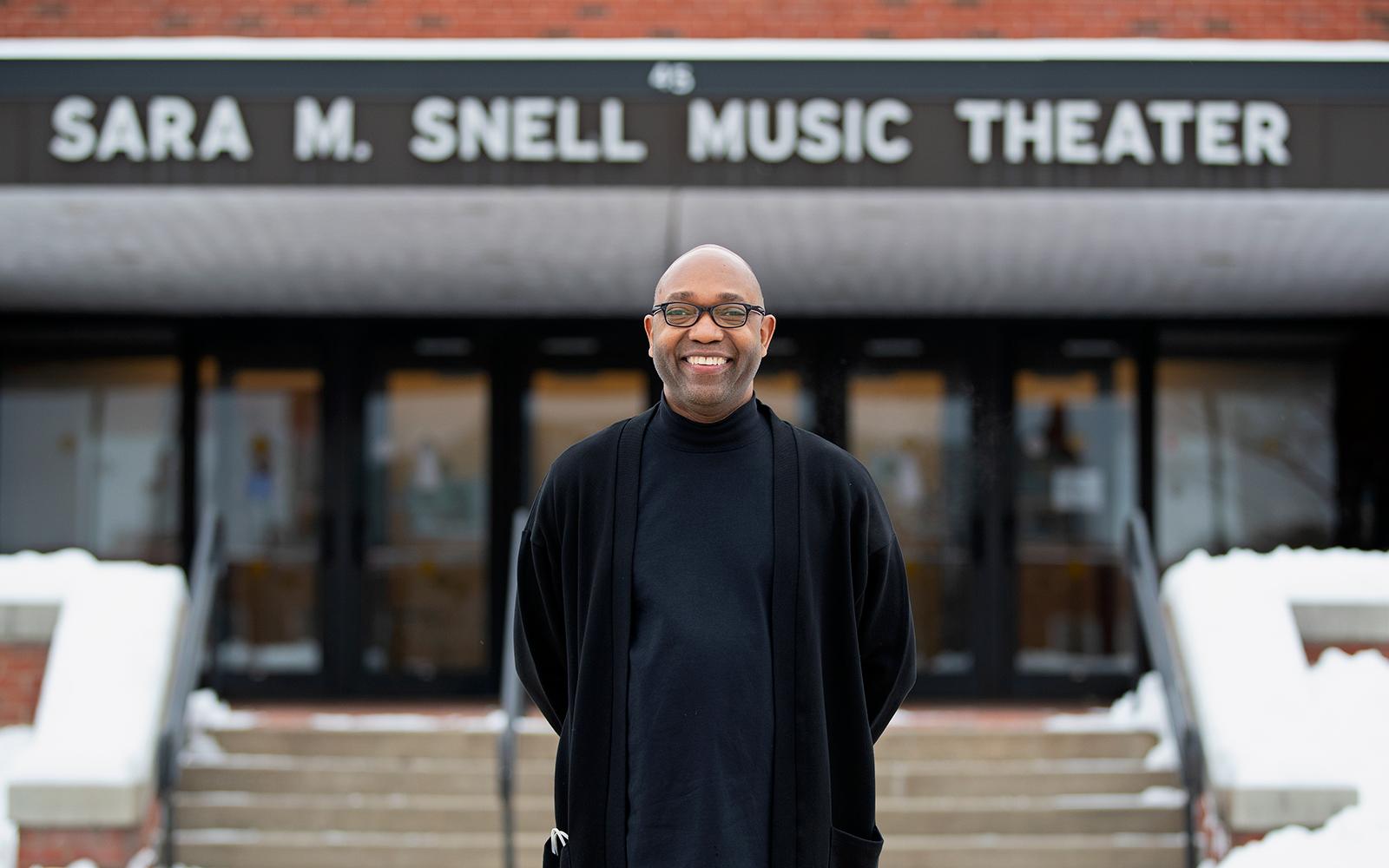 “You're getting more than a degree when you come here, you’re getting a blueprint for living, and what it means to be a functioning member of society,” Woods said.

During his tenure at Crane, Woods has been actively involved with the Crane Opera Ensemble, performing alongside students in three different productions. Every year, he attends dress rehearsals, and gives feedback to the cast and crew. “Our School is a very personable place where teachers and students can collaborate. When I first came to Crane, I sang a duet with a grad student. You can't do that anywhere! I've been in the business for a long time, I never sang anything with my teachers, and yet I did that the first semester I was here at Crane… that's major,” Woods said.

Outside of the walls of Crane, Woods has been a leader in addressing diversity issues at the College. From the first time he witnessed his Black and Jewish students being discriminated against at Georgetown Day School, he was acutely aware of the importance of effectively dealing with diversity issues. As chair of the Diversity and Inclusion Action Coalition (DIAC) at SUNY Potsdam, he works with other committee members to provide a safe, supportive, and inclusive environment for students, and when issues arise on campus, deal with them quickly and effectively. Woods pointed to a situation at the College several years ago where there was some unrest and students raised some concerns. “They asked for certain things to happen. They wanted to be able to find courses that they can take that talked about issues related to diversity, equity, inclusion—and so, our subcommittee decided to go make a diversity rich course list,” he said.

Community outreach is also at the heart of DIAC, with most of the committee members speaking to the public about diversity issues. “I've gone to the high school and done presentations for their teachers, a racism 101 class, to introduce the latest research, with terms like intersectionality, and multiculturalism,” Woods said. “We realize that the campus can change, but we can't really go forward unless the community is willing to take some steps with us, and so that’s very important.” Recently, wearing his hat as both the chair of DIAC and a professor of music at Crane, Woods spoke to a group of New York State music teachers about making classes more inclusive and welcoming for non-binary students.

The impact Woods has had on the SUNY Potsdam and Crane School of Music community during his tenure cannot be overstated. His positive, approachable demeanor, coupled with extensive experience as a music educator, and a dynamic career as an opera singer, all paved the way for the next step in his career as the interim dean at Crane. With his diversity initiatives leading the way, he plans to examine the curriculum for all three of the departments—performance, education, and music theory, history and composition—and pose important questions. “How are we going to start teaching our students and preparing them for the world they are going to live in?” Woods said. “The world has changed, and the student has changed. It's time to examine that.”