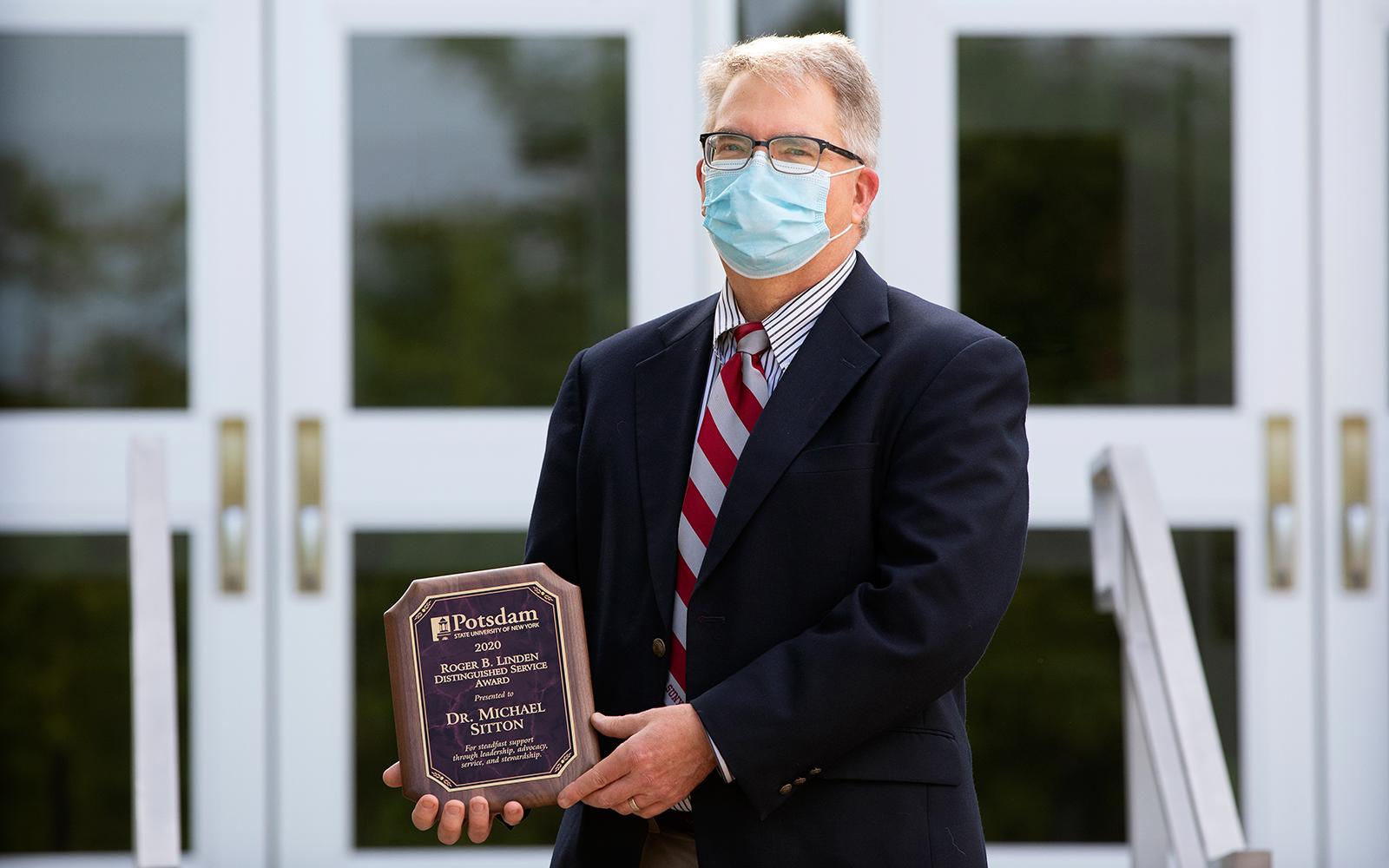 SUNY Potsdam has named Crane School of Music Dean Michael Sitton (Hon. ’20) as the recipient of its 2020 Roger B. Linden Distinguished Service Award, the highest award bestowed by the College.

President Kristin G. Esterberg surprised Sitton with the award as he arrived on campus on Friday, just days before he is set to retire. The Roger B. Linden Distinguished Service Award is normally presented during Commencement, but the College was unable to do so this year as it marked a virtual celebration.

The annual recognition is bestowed upon an individual who has demonstrated steadfast support for SUNY Potsdam and the region through their leadership, advocacy, stewardship and service. In addition to this honor, the SUNY Potsdam Alumni Association has also named Sitton an honorary alumnus, granting him Honorary Lifetime Membership. 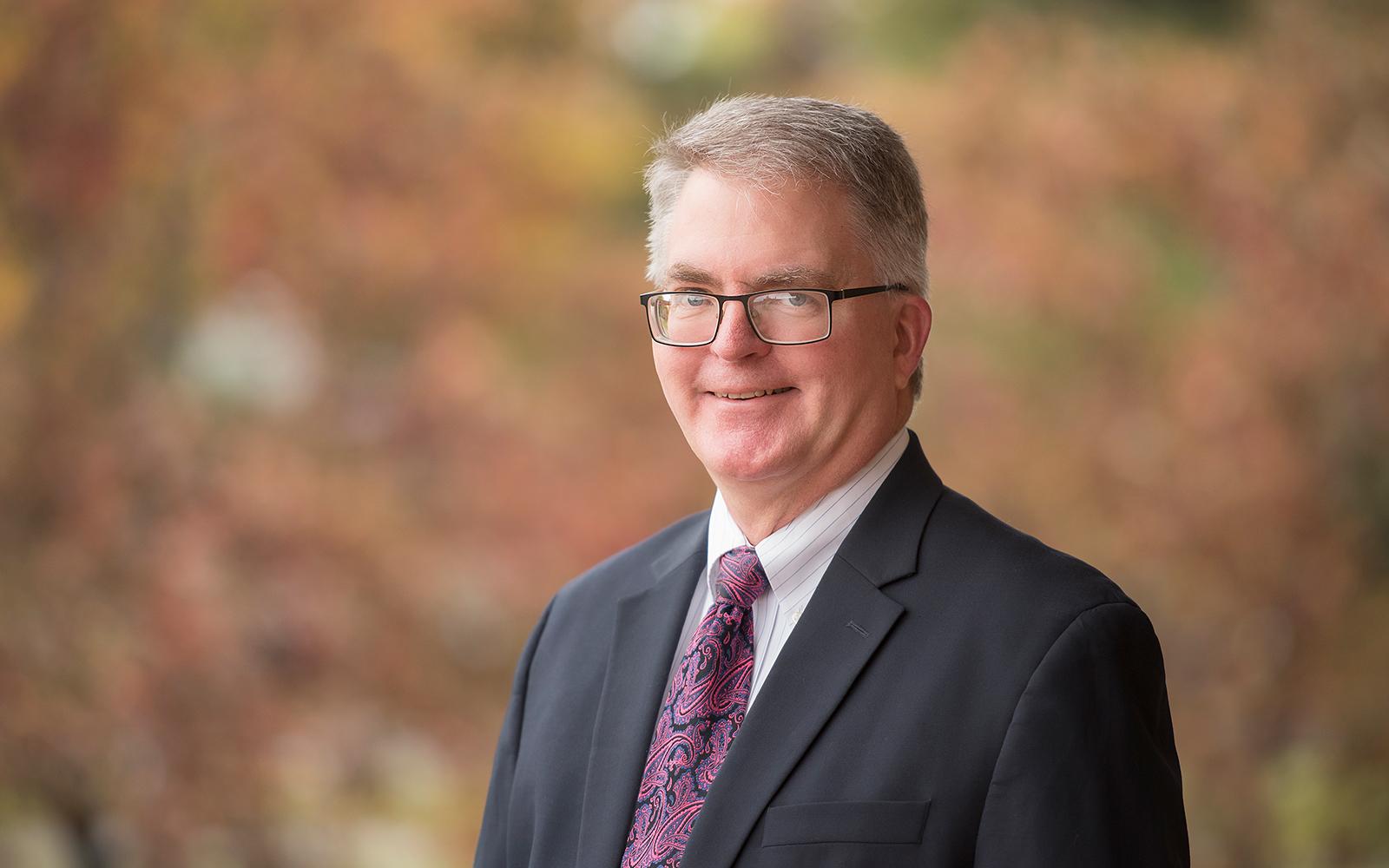 “During his 11 years of service, Dr. Michael Sitton has gained the respect of students, faculty, staff and alumni, and traveled throughout the nation as an ambassador for The Crane School of Music," Esterberg said.

"The tradition of innovation that has been a part of the Crane experience from its founding in 1886 continues to thrive today. Like his predecessors Julia Crane and Helen Hosmer before him, Michael has helped to build programs that encourage the highest quality of musical artistry, with a foundation in creative and engaging pedagogy. I am immensely grateful for his service to SUNY Potsdam, The Crane School of Music and our community,” Esterberg said.

Sitton earned his bachelor’s degree in piano performance from Mars Hill College, before completing his master’s degree at the University of Kentucky. He went on to complete his Diplome de Concert in piano at the Schola Cantorum in Paris, and finished his Doctor of Musical Arts degree in piano performance and literature at the University of Illinois at Urbana-Champaign. Sitton served on the music faculty at Hollins University for 13 years and went on to become the dean of fine arts at Eastern New Mexico University, before being named dean of The Crane School of Music at SUNY Potsdam in 2009. 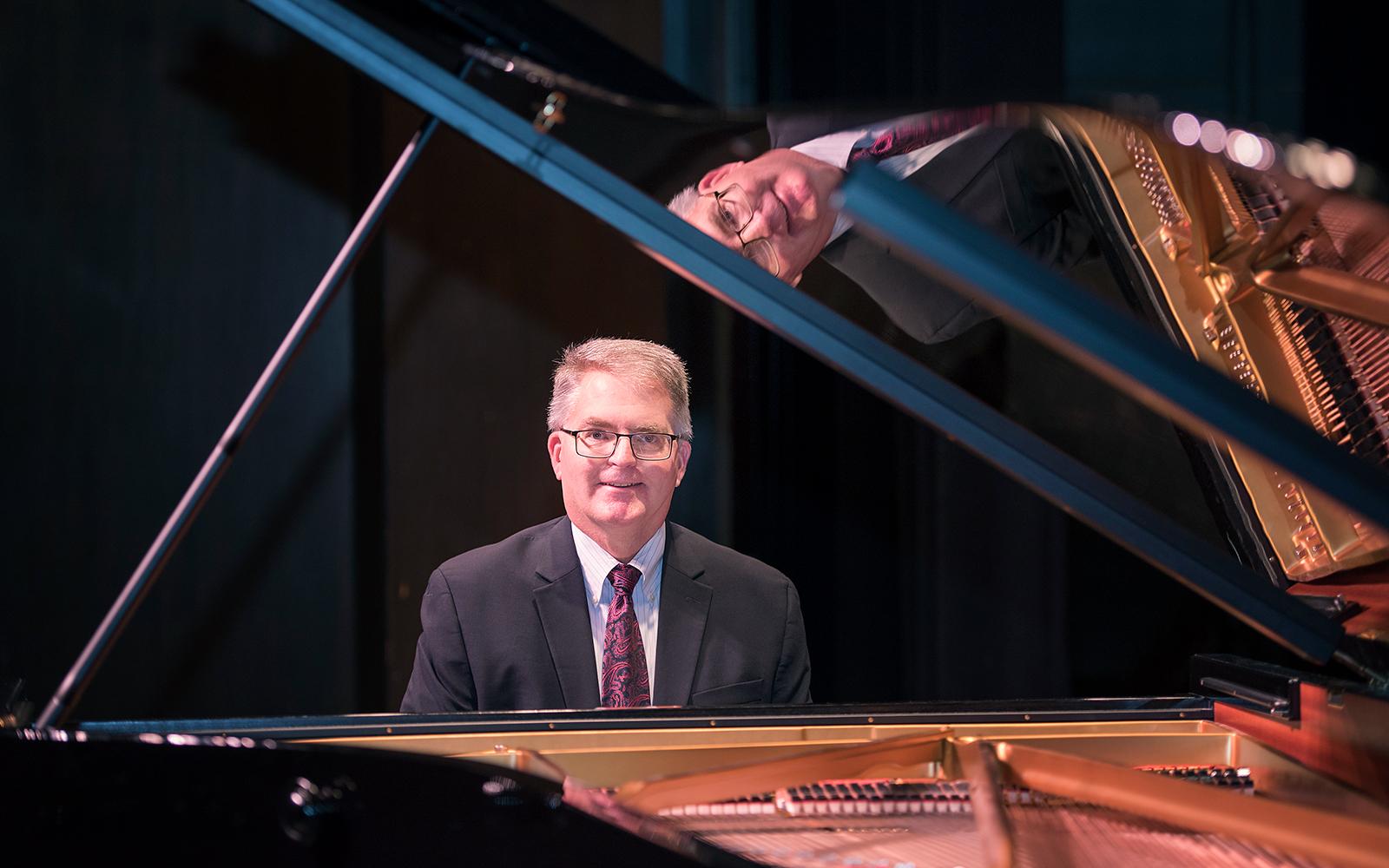 During his tenure, Sitton instilled in his faculty a renewed devotion to innovative music education, along with an expectation for a high quality of performance. Due in no small part to his efforts and outreach to prospective students, enrollment at Crane is now at record levels. He spearheaded the effort to have Crane alumni present at audition days to help welcome prospective students and their families, and advocated for the creation of a Crane alumni network to invite graduates to serve as guest lecturers, visiting artists, mentors and donors. He also built close, lasting relationships with the School’s faculty emeriti. 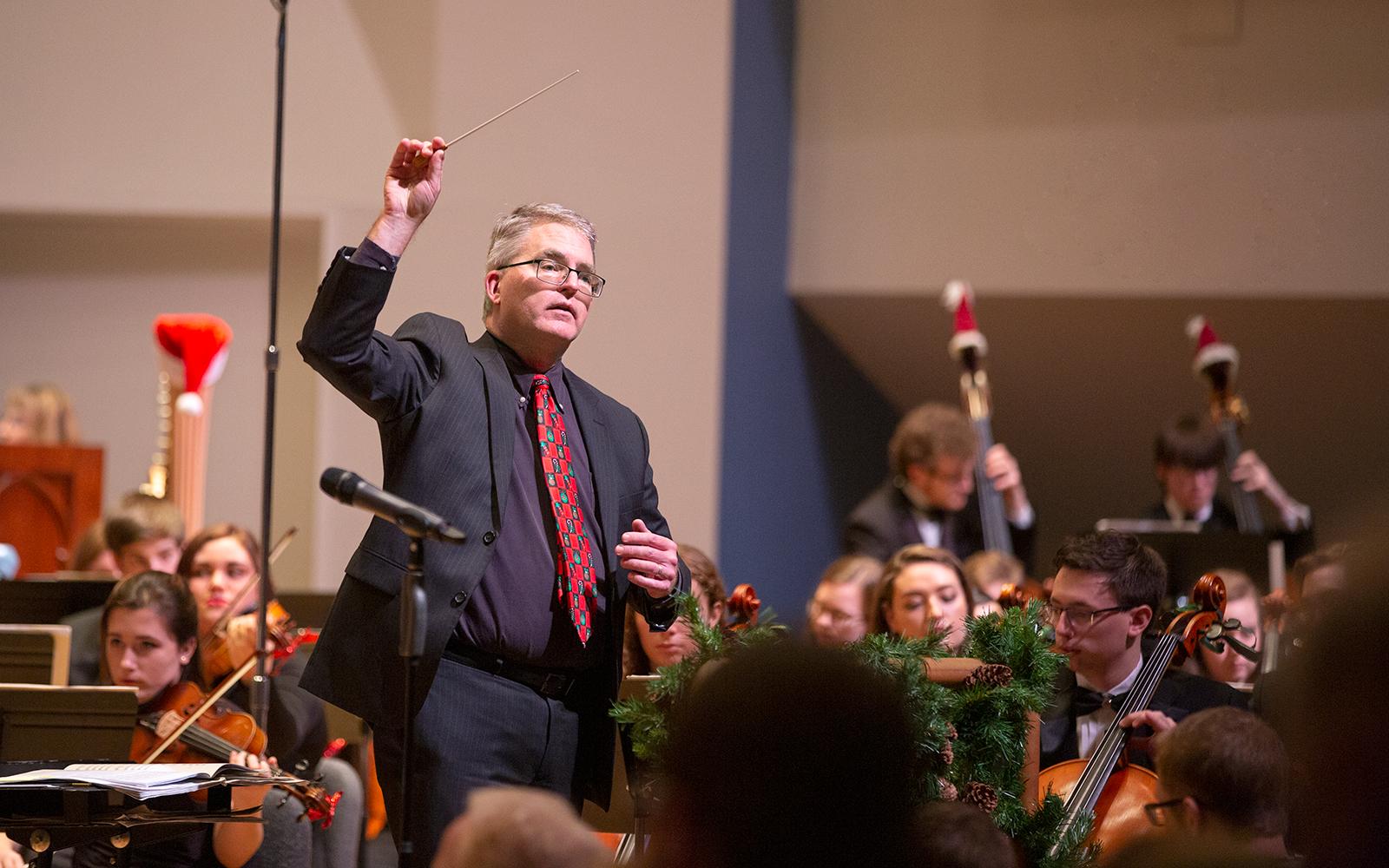 Under his leadership, Crane secured much-needed funding for the first expansion of the Crane Complex since its construction in 1973. This $3 million project will create an official welcoming entrance into The Crane School of Music, and allow for the expansion of the major rehearsal rooms for band and orchestra, along with other critical building-wide improvements.

Sitton’s ability to build and nourish relationships with alumni and friends has resulted in millions of dollars in philanthropic gifts that have transformed the SUNY Potsdam campus and The Crane School of Music, including the LoKo Arts Festival, as well as scholarships, such as the D'Addario Family Scholarship for Music Education. Thanks to the Dorothy Albrecht Gregory Visiting Conductor Fund, the Crane Chorus and Crane Symphony Orchestra are able to perform major works under the baton of distinguished visiting conductors and alongside visiting artists each year, including commissioned works and world premieres. The major ensembles have also traveled to present historic concerts at Avery Fisher Hall at Lincoln Center, and at Carnegie Hall, through the support of the Adeline Maltzan Crane Chorus Performance Tour Fund.

During his tenure, Sitton strategically placed The Crane School of Music on the national and world stage, through the creation of the Domenic J. Pellicciotti Opera Composition Prize; through regular livestreams of concerts, recitals and presentations through the Gail and Richard Stradling Technology Endowment, and the advocacy for public elementary music education through the Janice and Roger Johnson Center for Leadership in Music Education. 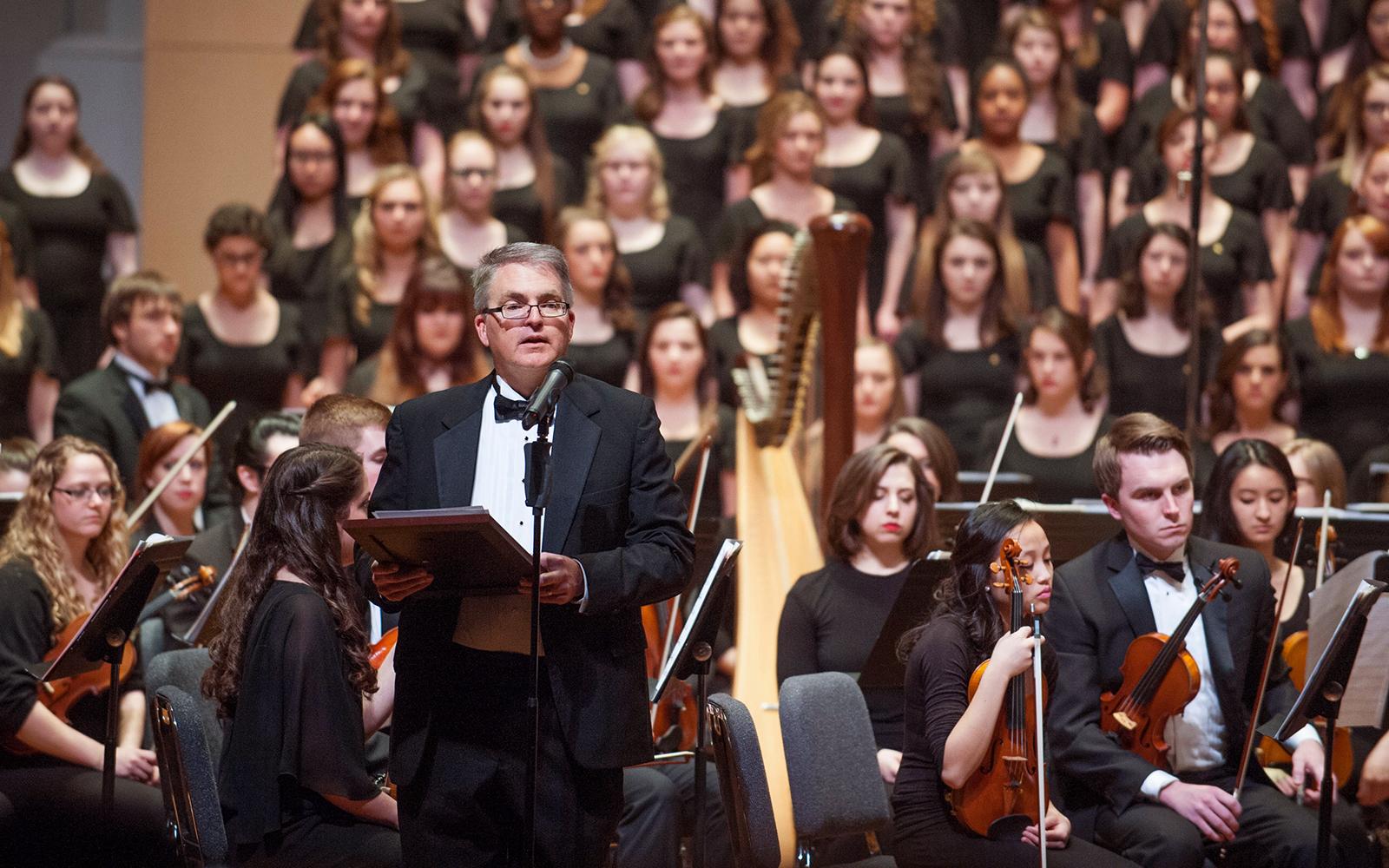 Despite all the many demands as Dean, Michael still made time to attend many Crane concerts and recitals to show his support for both students and faculty.  He often performed as pianist in concerts and recitals himself, and many of his musical compositions were included in performances. He and his partner, Mark Martin, established the Sitton-Martin Scholarship. Following Sitton’s retirement, he will be succeeded by Associate Provost Jill Pearon, who will take on the duties of Interim Dean.