Smile for the Camera

They say a picture is worth one thousand words, and for a group of SUNY Potsdam professors studying small mammal diversity, that rings as true as ever.

Imagine a game camera with reading glasses. That’s one of the creative ways that four faculty members have been capturing close-range images of an unsuspecting assortment of small animals through the modified lens of a wildlife camera.

As part of a $5,000 grant through the Lougheed Center for Applied Learning, SUNY Potsdam faculty members Dr. Kate Cleary, Dr. Glenn Johnson, Dr. Jessica Rogers and Dr. Bridget Amulike launched a pilot project this summer to determine the most effective ways to collect data on a variety of small mammals ranging from deer mice and shrews to chipmunks and weasels.

“After chatting with Kate Cleary about this one day, we came up with the idea to investigate the biological diversity differences that might exist along the gradient from rural landscapes to more human-dominated ones,” said Johnson, a professor of biology at SUNY Potsdam. “I knew both Bridget and Jessica were also very interested in biological conservation, so we brought them in as well.”

Dr. Kate Cleary shows a Sherman live trap to her students before setting up an array in Potdsam.

A modified game camera is seen here attached to the bottom of a bucket.

As the SUNY Potsdam professors launch a multi-year research project to observe regional small mammals, they are first looking at the best practices for collecting the data at three sites throughout Northern New York—a wilderness area along the shores of Cranberry Lake, the Upper and Lower Lakes Management Area in Canton,  a location right on SUNY Potsdam’s campus, and a fourth site along Parkhurst Brook in Potsdam.

Much more difficult to study than larger mammals, they are testing four trapping methods including Sherman live rodent traps, pit fall traps (a bucket placed in the ground to capture small animals), track plates (a small tunnel for the animals to pass through to collect their tracks), and a bucket cam trap, the latter of which is proving to be the most promising. 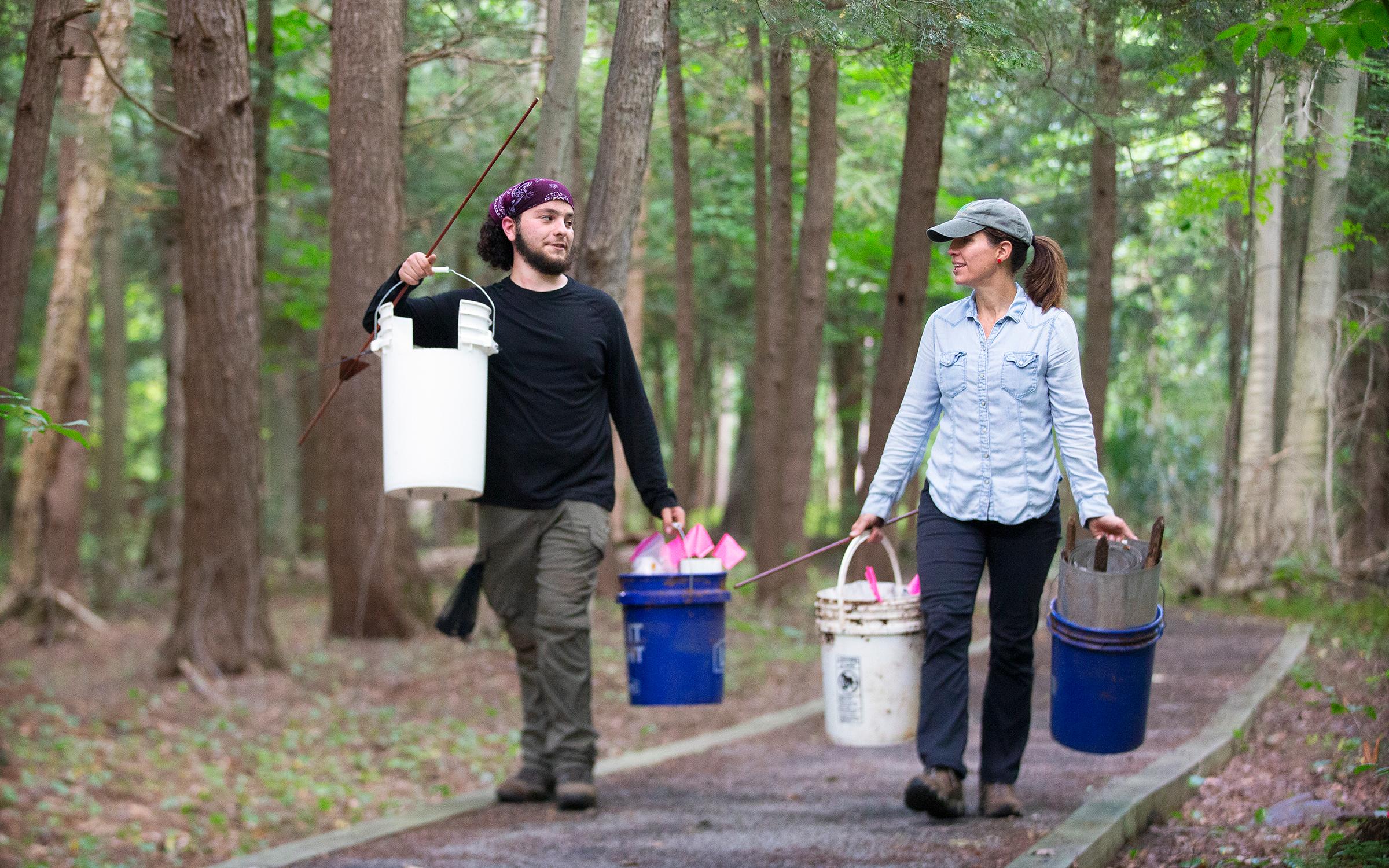 Vincenzo Bonaiuto ’23, left, carries a bucket cam trap while walking through the woods with Dr. Kate Cleary during their research project on small mammals in the Upper and Lower Lakes Management Area in Canton.

Handmade by SUNY Potsdam senior Vincenzo Bonaiuto ’23, the upside-down bucket has holes in the sides that allow animals to pass through the enclosure, for what amounts to an animal selfie. Lured by the smell of roasted peanut oil, the mammals pass by a motion-activated game camera mounted inside the bucket. A $7 lens from a pair of reading glasses placed over the camera lens creates a macro photography environment where the critters can be photographed at close range.

So far, the team has captured images of 12 different species of small mammals on the bucket cams. One major advantage of the bucket trap is the pass-through feature, allowing animals to pop into the bucket for a photo, and then easily escape. “We’re trying to find a method that creates the least mortality while collecting the most data, and we think the bucket cams might be able to do that. From the data I’ve looked at already from our other two arrays, the bucket cams are coming out ahead,” Cleary said.

After examining all the data from their three target sites—with a total of 15 arrays featuring the four trapping methods—the SUNY Potsdam team will make final decisions about which collection method they should continue using in the future.  “As we’ve been studying the diversity of small mammal species along the urban-wildland interface, we’re able to see a variety of animals living in these different land use areas,” said Amulike, who is in the middle of a two-year PRODiG fellowship at SUNY Potsdam. “It’s a new experience and I really like it. I did much of my research in Africa, and although the research methods are not that different, it’s exciting to get out here to learn about new species.” 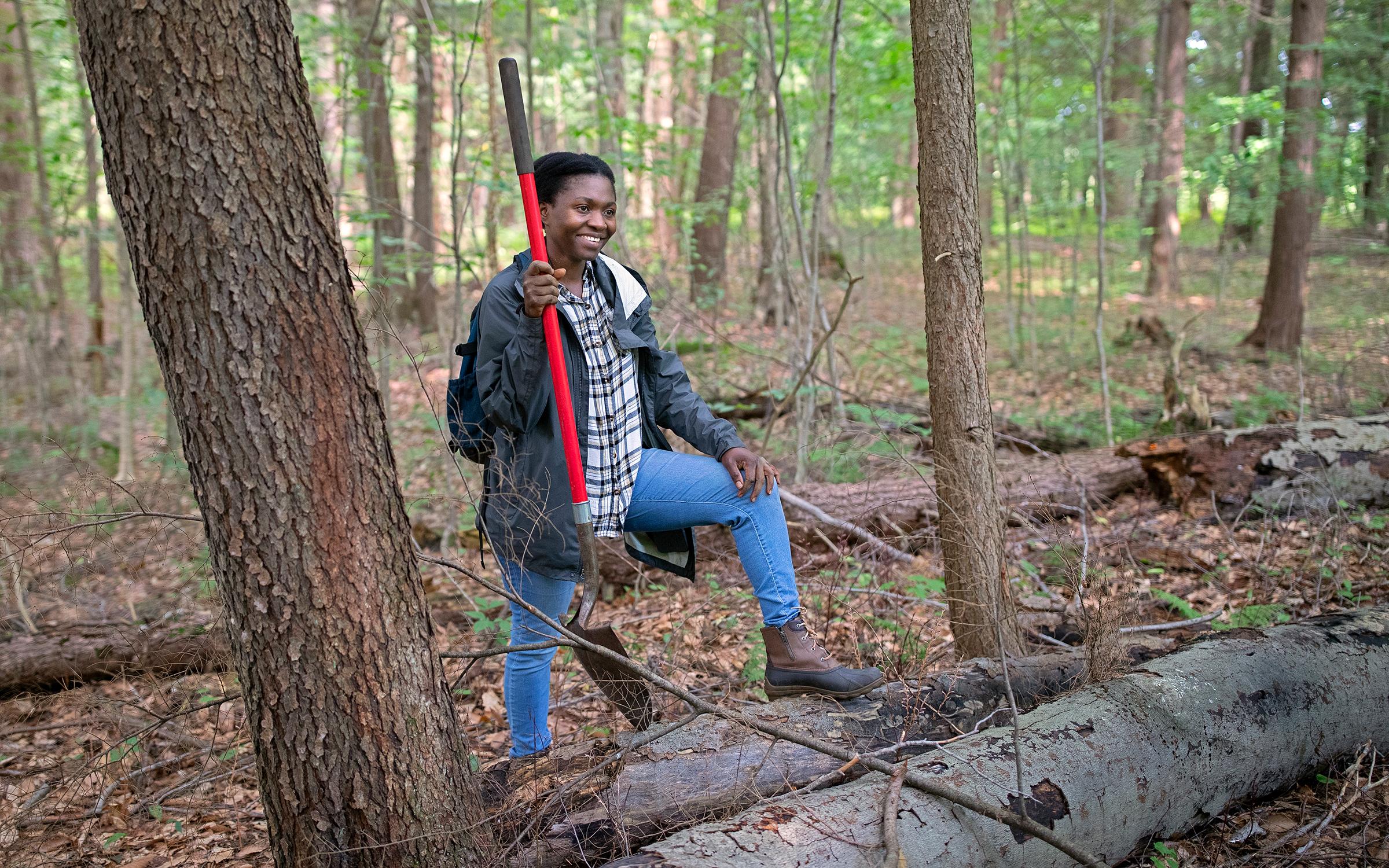 Dr. Bridget Amulike walks through the Upper and Lower Lakes Management Area in Canton while conducting research on small mammals.

Next summer they will launch the second phase of the project to examine the types of diseases carried by regional small mammals. From Lyme disease to anaplasmosis, Cleary said that diseases that once were found predominantly in just southern parts of New York State are spreading north due to climate change. “We’re going to be looking at tick abundance and how many of those ticks are carrying diseases. Small mammals are important because they’re linked to human (zoonotic) disease, and they’re understudied because they’re hard to trap,” said Cleary, an assistant professor of environmental studies.

As the biology and environmental studies professors continue to collaborate over the coming years, they will be relying on money from the Lougheed grant to purchase supplies, and they will be utilizing equipment from Johnson’s previous fieldwork, including 50 game cameras from his research on Blanding’s turtles.

“I got the germ of the idea for this project when I was thinking about how to make better use of all these trail cameras,” Johnson said. “This new project shows great promise to become a long-term collaborative endeavor here at SUNY Potsdam, one that will engage, and hopefully recruit students long into the future as it will keep generating new questions to investigate, new issues to explore, and new problems to solve.”

To learn more about the Department of Biology, visit: https://www.potsdam.edu/academics/AAS/depts/bio

To learn more about the Department of Environmental Studies, visit: https://www.potsdam.edu/academics/AAS/depts/EnvStudies