Lost and Found in the Adirondack Wilderness

As the group breaks from the trail, the dense vegetation of the West Canada Lakes Wilderness closes behind them as soft and final as giant hands. Eight hikers enter a complex dance with being lost — and barely found. Hunched under full packs, saying little, they begin a journey whose outcome is as murky and unmarked as the wetlands ahead, and only one thing is abundantly clear: They will not be going back the way they have come. 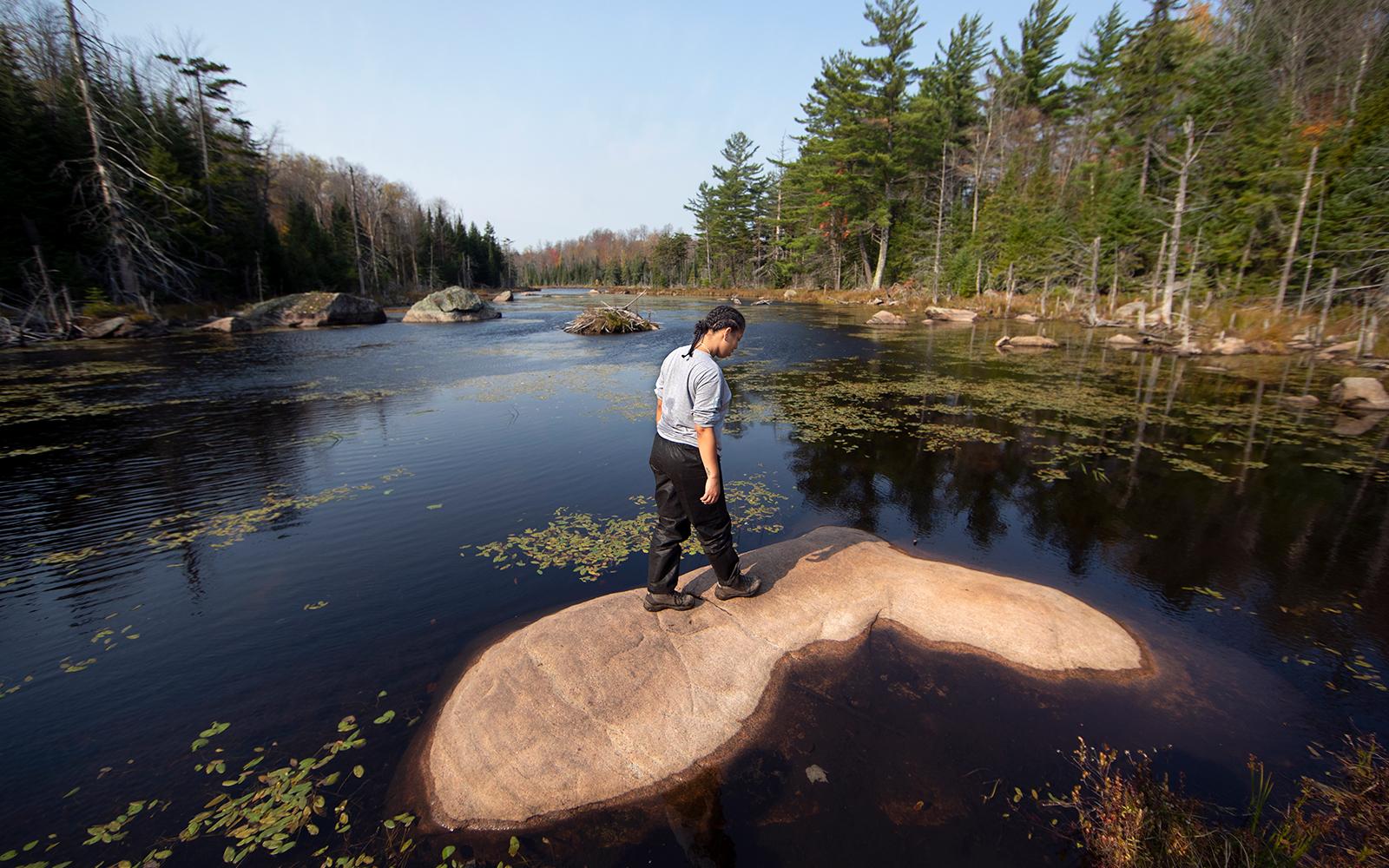 Ebony Huertas '21, a student in the wilderness education program, explores Little Rock Pond during a backpacking trip in Parishville, N.Y.

Welcome to the SUNY Potsdam Wilderness Education program and the crowning jewel of five months of preparation — a 14-day slog through one of the largest wilderness areas in the Adirondack Mountains. The trip promises unmatched beauty and raw, tactile encounters with nature. It centers around surviving, planning and watching plans fall apart, figuring out how to get to the next place and taking only a minimal number of mosquitoes to bed at night.

Call it a boot camp for the leaders of tomorrow.

Each of the participants will be deeply tested. When the forest canopy snaps shut and landmarks disappear, they grope for map and compass and try to determine their location. They must figure out how to navigate a swamp and avoid terrain that poses too high a risk of broken bones. They find their way to drinking water, clean it with iodine, take a break at a pre-determined time and carefully bury any human waste.

Hoisting laden packs, they soldier on. Faced with the forest’s blank slate, the individual tasked with leadership for the day synthesizes a host of different options, balances logic against the occasional impulse to panic and tries to determine how much risk is involved in getting to the next stop. Student Riley Notarthomas ’23 describes the logic, emotion, and pressure of leadership in this way:

“The mental challenge is that you are not only facing the same difficulties that everyone else is, but you are at the head of them. You are making the calls. You have to be thinking one step ahead of everything. So you have to put aside your personal discomforts. When you’re dealing with the stress of juggling tasks, it can be easy to overthink and get frustrated. You need to be humble enough to let your followers help when you need them. Sometimes it’s best to let others make a decision — that’s actually good situational leadership. You need to have respect for your followers, and you want them to respect you and have faith in you. This requires confidence, focus, a level head and a positive attitude — traits that can be very difficult to obtain after a long day in the woods, when things are going south, and we should be going north.”

Notarthomas helps to lead a backpacking trip in the White Hill Wild Forest in Parishville.

Risk — a small word with huge meaning. How the students determine its basis in reality versus mere perception and how they proceed from there lies at the heart of the journey. It is not easy to untangle actual risk from innate human fear. The process of gaining the necessary clarity — heightened by the natural elements — not only helps to shape leaders; it also holds lessons students can apply across the spectrum of their experiences.

“An actual risk may be crossing a waist-high, swift-moving river with a 50-pound pack on your back,” explains Adam Wheeler, SUNY Potsdam’s wilderness education coordinator, who oversees the trip. “A perceived risk might involve climbing a steep rock face while being belayed on a secure rope system. Risk is in the eye of the beholder. An individual’s perception of that risk can either be an experience that creates extreme panic and fear, or it can create a heightened sense of discomfort that — when approached properly — results in personal growth.” 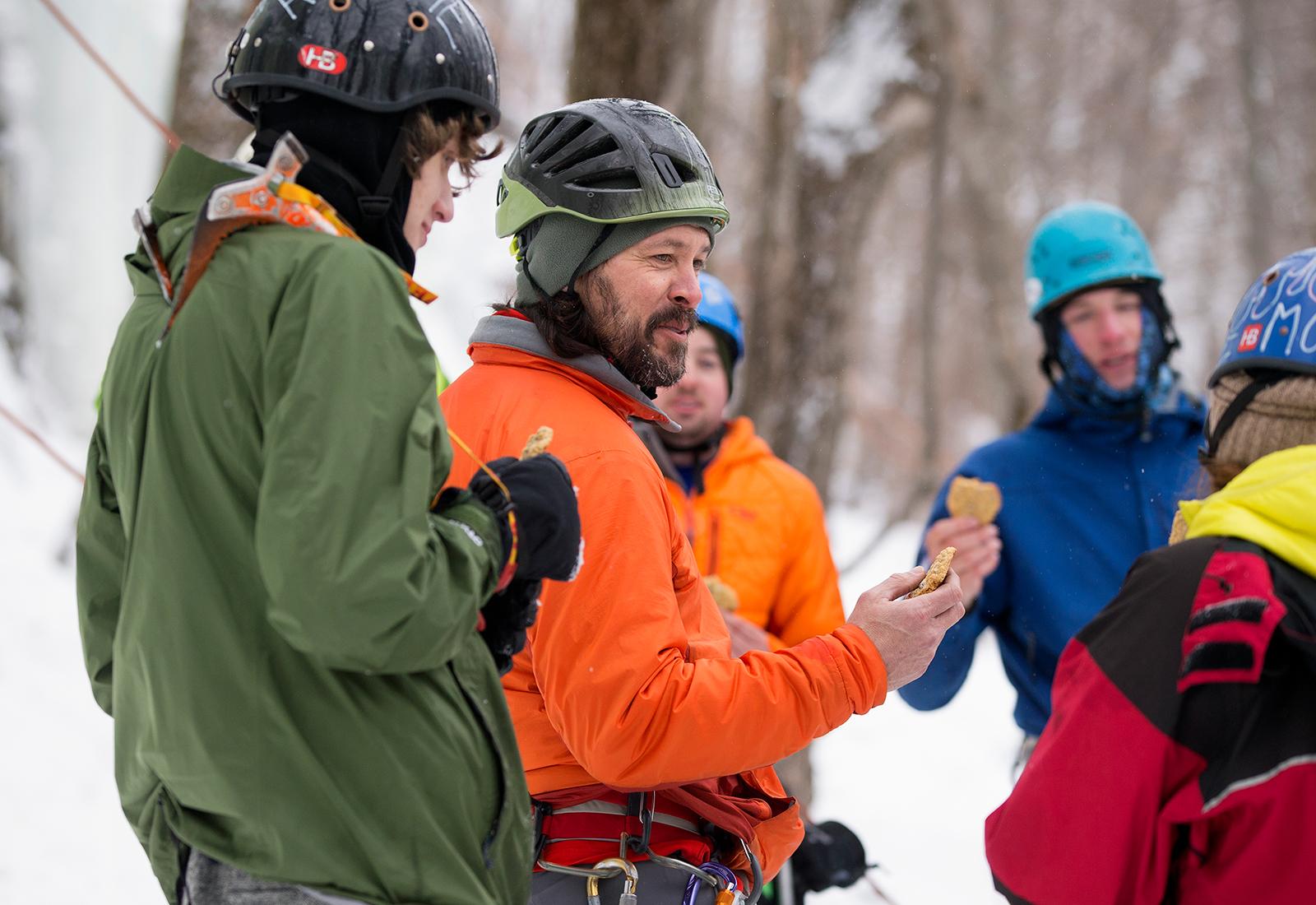 As daylight wanes, the tents pop up and the cooking stoves come out. The trekkers ignore the pain in their muscles. The day’s reward glitters in the background — the surface of a lake, remote and apart from time, reflecting a smoky sunset. The band hoists their food high into trees in hopes of deterring a nighttime visit from bears. They draw into a circle and it is debriefing time. 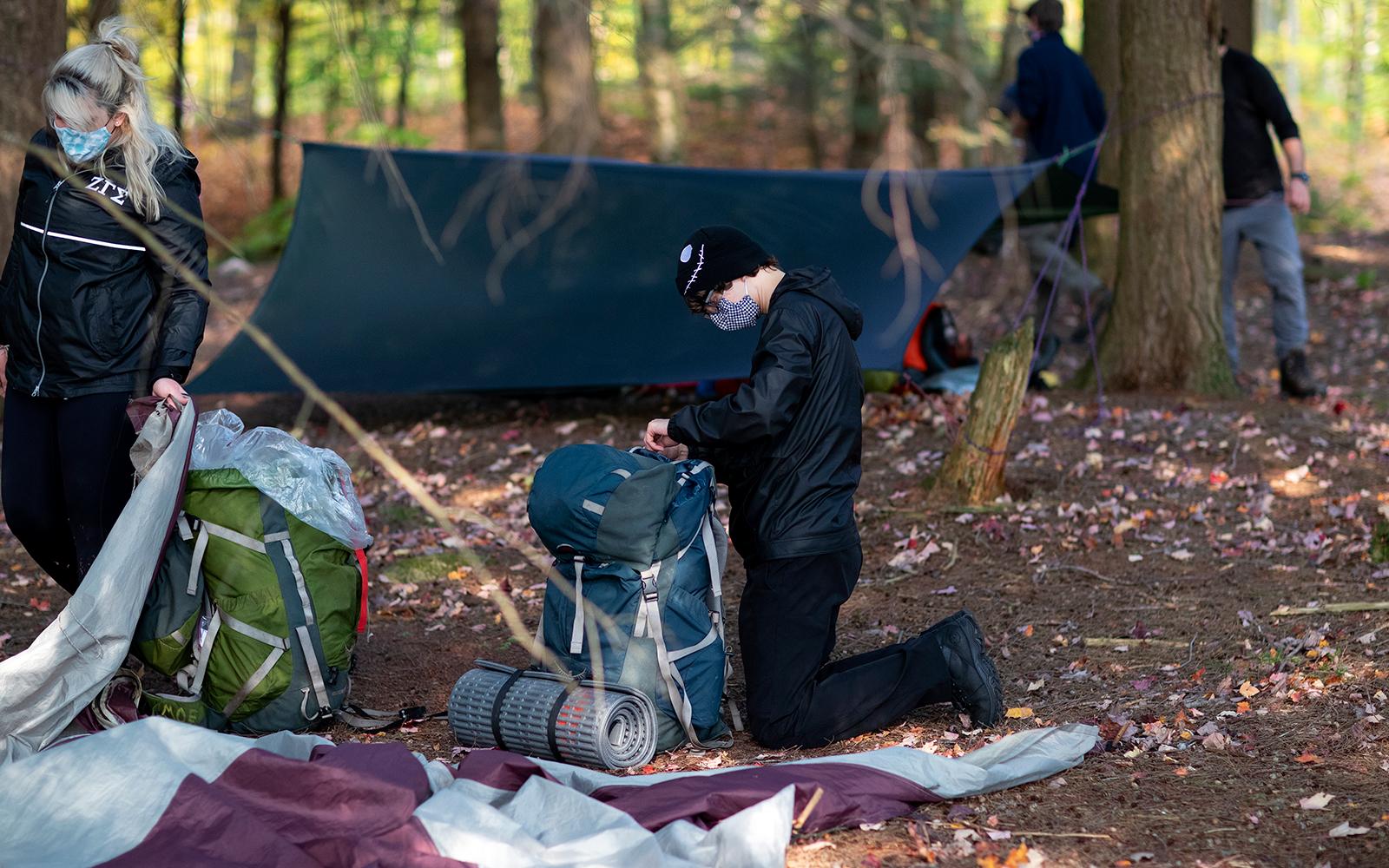 The day’s events, the leaders and followers go under the microscope. Everyone has to endure it, and the criticism lands firmly and honestly. No feelings are spared.

“The instructors are very critical and encourage honest feedback for the leader, so they can improve the second time around,” Notarthomas says. “Everyone learns from and challenges each other, helping us gauge our strengths and weaknesses as individuals so we can do better communicating and cooperating as a group.”

Notarthomas has been itching for months to take this challenge. Like other college students and most of the country for that matter, COVID-19 has made him feel cloistered since spring, a bit ill from the streaming electrons of a computer screen, and tired of living by proxy, “devoid of much adventure or physical interaction.” 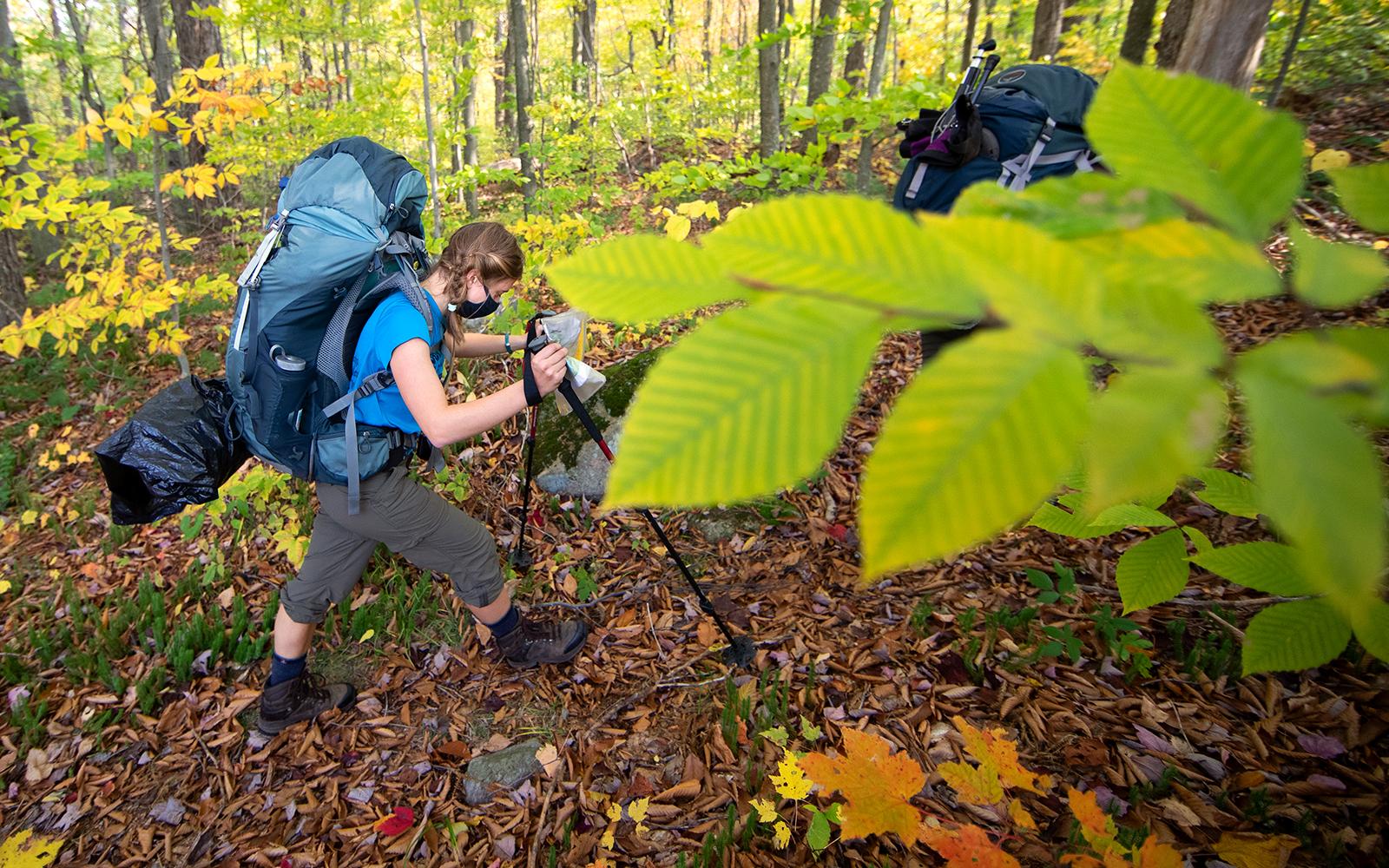 The trip started five months earlier where all such adventures begin — the SUNY Potsdam campus. The group spent days planning routes and options, measuring risks and coming up with contingency plans for everything from broken bones to a sudden onset of high fever. The wilderness is a terrible place to fall ill.

This year, COVID-19 presents its own challenges and lessons, and the group builds a scenario for dealing with the disease, should it strike. They quarantine and test negative for the virus just before the trip, but are determined to act as if they could contract illness from one another at any time. They practice social distancing and heightened hygiene, refrain from sharing food and sleep in pods that expose them to the same person all through the trip.

With teamwork at the forefront and egos tucked in a small pocket of the rucksack, the group presses deeper into the wilderness. Like cramped fingers that have been held too long in a fist, their senses slowly unfold. The buzz of nervous thought drains away, replaced by the sounds of birds and the sensation of rough and solid earth. The group members begin to feel more connected to the ground, and to each other.

Many have come away from these trips sensing the journey has changed their lives in some foundational way. Mike Yuhnke ’12 was adrift academically before he transferred to SUNY Potsdam and began to take every wilderness education elective the college offered. In the years following his graduation, he would scale high peaks in Central Asia and South America, bike across the United States, and lead troubled youths on sprawling 64-day trips in Alaska’s Tongass National Forest, where the groups would drill into negative behaviors and forge new ways of dealing with the world.

“I owe a lot to the program and give a lot of the credit to Adam Wheeler,” Yuhnke said recently. “He spends a lot of time individually with his students in the classroom and in the field, pushing their skill sets and challenging them to think pragmatically and grow. As a result, it produces lots of high caliber professionals that go out into the world and excel at whatever they put their minds to.”

Wheeler’s group covers 65 miles by the time they are finished, entering at Moose River Plains near Inlet, N.Y. travelling south to resupply their food at Piseco, N.Y., then heading north. Because they spend the majority of the trip bushwhacking far from trails, they cross untrammeled wilderness few will witness.

In spite of the pressures of leadership and survival and the fact that two weeks in the woods is no joke, Notarthomas is able to experience a badly needed escape and even efface the outside world entirely — if only temporarily.

“In 2020, there are just too many things to worry about,” he concludes. “The outdoors in general provide this timeless escape from society, with a feeling of solace in the natural world. We are grateful to share such a real experience with each other.” 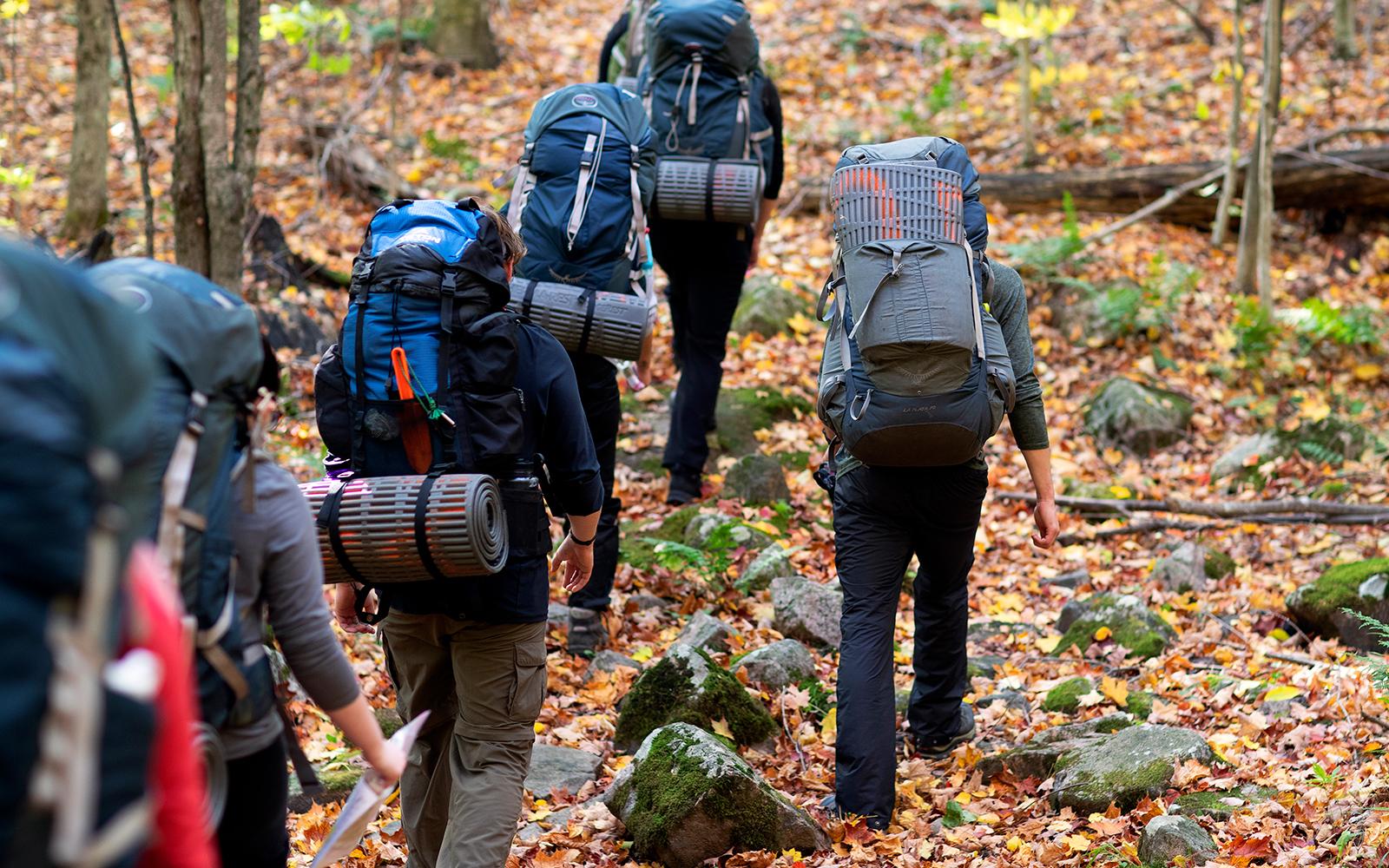