Running for a Cause 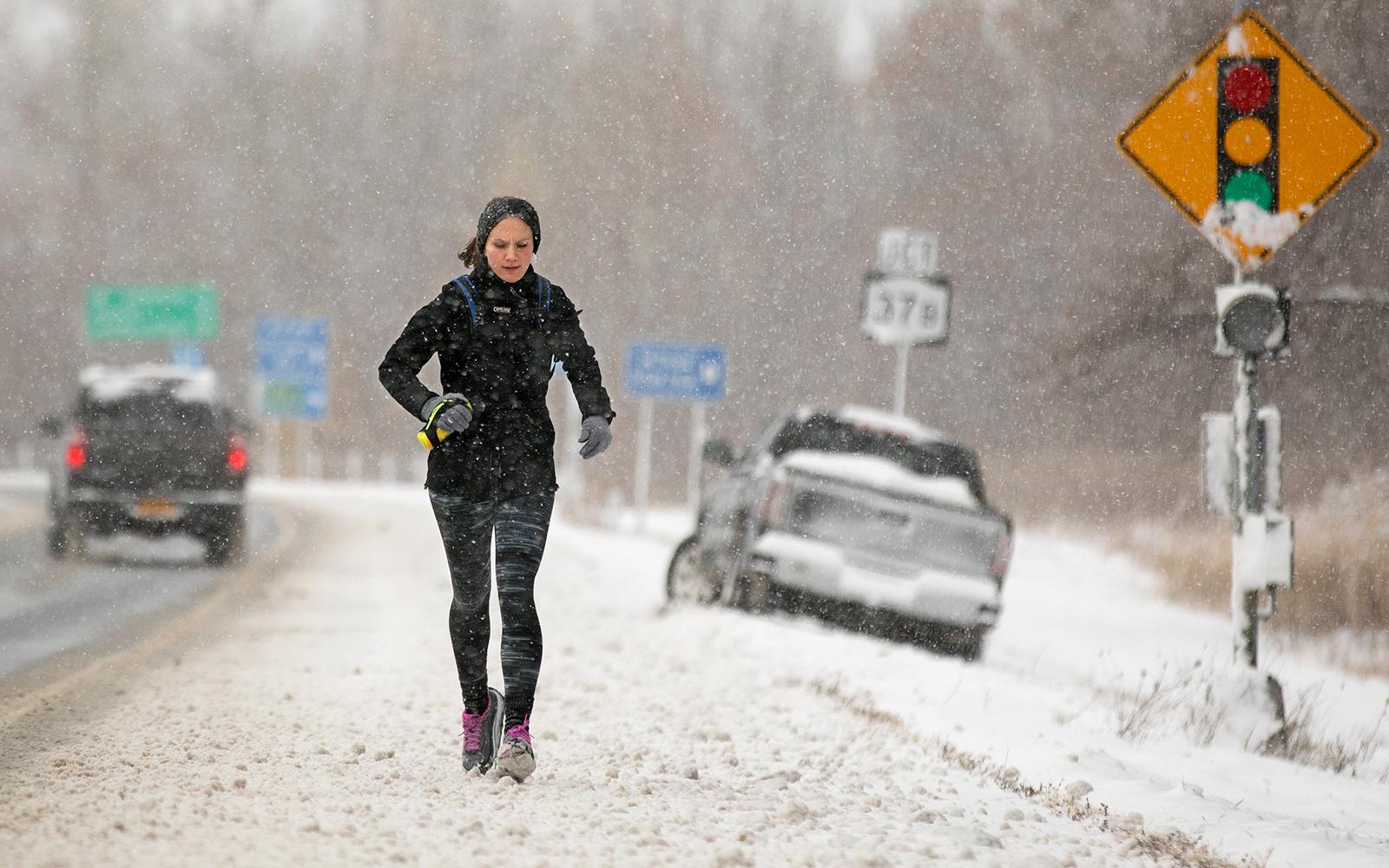 In an effort to raise awareness about the 110,000 children currently in foster care who are up for adoption across the country, Jessica Hurlbut ’19—a graduate student pursuing an MST in childhood education at SUNY Potsdam—set out to run 110 miles in 24 hours. After lacing up her shoes and securing ice cleats over her treads, she headed out into the first snowstorm of the year—a gnarly mix of snow, slush and icy conditions that gripped St. Lawrence County on Nov. 16.

As she left Massena, powering through mounting snow on the edge of the road, she weaved back and forth between the snow and the plowed section of Route 37—at one point passing a pickup truck that had slid off the road. She ran to Akwesasne first, then headed south to Winthrop, where she met her first running partner. When she reached Potsdam, she synced up with Tanya Hewitt, the coordinator for SUNY Potsdam’s exercise science program, to run the leg to Canton. Throughout the day and night, supporters kept joining her on the run.

“Even in the middle of the night, I had people come out of their house, figure out where I was, and run with me,” Hurlbut said.

At 3:45 in the morning, after running 67 miles over the course of 19 hours—and more than two and a half marathons—she passed the proverbial torch on to her friends and supporters to finish the journey. “I felt good mentally. I felt like I could keep going, but my body wouldn’t let me. My ankles were swollen like crazy. I’ve done a 50-miler too, and I’ve never experienced that,” Hurlbut said.

“From 32 miles on, I always had somebody running with me. That was planned all the way to the end, so when I couldn’t finish at the 67-mile mark, the guy who was pacing me said, ‘I’m going to keep running ahead.’ Then, my husband contacted the people waiting for him, and said ‘Would you still be willing to run? Jess can barely walk,’” she recalled.

When Hurlbut couldn’t go on, the community she inspired stepped up to finish her incredible run.

Hurlbut showed up in Massena 20 minutes before the last runner finished, joining over 100 people to walk the final quarter of a mile—what turned out to be a 110-mile relay to raise awareness about the need for adoption. “As much as I wanted to make it physically to the end, I was like, ‘You know what, this is almost better, because it was never about the run. The run was the way to bring the attention to the need,” she said.

Hurlbut’s goal was to inspire people to do something challenging and adopt a child. “That’s why I wanted to do the run because it’s ridiculously hard, and so is the decision to adopt. Sometimes those are the most amazing decisions that you can make in your life, the ones that have purpose and have meaning,” she said.

Hurlbut said that there are half a million children in foster care around the United States, of which 110,000 are available for adoption right now, with no tie to biological parents. Hurlbut’s passion to raise awareness is rooted in her own decision to adopt two children: Isaac, 5, and Emma, 4, with her husband Greg several years ago. She also has three biological children, Jeremiah, 10, and two children with autism, Mara, 9 and Jacob, 5. “I had always wanted to adopt, even when I was a teenager. I just want to impress upon people that it’s the best decision that I’ve ever made,” she said.

Hurlbut’s athleticism also landed her on “American Ninja Warrior” in 2016, but unfortunately, her attempt never aired. “They highlighted my story and they did all this special footage about adoption. The goal was to get the word out, but I fell on the first obstacle and they didn’t air my run, so they didn’t air my story,” Hurlbut recalls. Despite not doing well in the “American Ninja Warrior” competition, Hurlbut made an impression. She was invited to Philadelphia last spring to be a course tester for their upcoming show.

In an effort the get out her message another way, she turned to the idea of running 110 miles, a mission that has garnered lots of media attention. She was recently featured in Runner’s World, 7 News/Fox 28, the Watertown Daily Times, B 99.3 and two national Christian radio stations, KLove and Air1.

Faith has also always been an important part of Hurlbut’s life. For 11 years she has worked as a youth pastor, with her husband Greg, at the New Testament Church in Massena—the same church where they met as teenagers. “I think that’s a big part of why I’m doing all this, because I really feel like this is something that God has placed on my heart. I don’t think it’s by accident, I think it’s the path that God had for me,” she said.

In addition to raising five children and raising awareness about adoption, Hurlbut is also pursuing a master’s degree in childhood education at SUNY Potsdam, with the ultimate goal of becoming a physical education teacher. “I already have a bachelor’s degree, but it’s not in teaching, so that’s why I went with the MST in childhood education program. My bachelor’s degree was in church leadership, so SUNY Potsdam takes people from different professions and then they have these real intense three semesters to basically mold you into teachers,” she said.

“The teachers (at SUNY Potsdam) are awesome! The same students are in every class, so you really get to know all your peers. I love it! It’s broadening my knowledge of how to effectively teach and that carries into everything. It will carry into being a physical education teacher and it carries into being a pastor,” she said.

Hurlbut will be doing her student teaching in the fall of 2019 where she will work one-on-one with children at local elementary schools—the last step before receiving her master’s degree in childhood education. She then plans on returning to SUNY Potsdam for another year of classes in the Department of Public Health and Human Performance, where she will take 30 credits of exercise science courses to prepare her for required New York State exams to become a physical education teacher.

Family, faith, fitness and education are driving forces in Hurlbut’s life. Her passion to raise awareness about the need for adoption has combined all of those elements and placed a spotlight on the fact that so many children need homes. “I’m just trying to inspire people to say, ‘You know what, let’s take that risk.’ It’s worth it, even if it’s hard,” she said.

For more information about adopting one of the 110,000 children in foster care seeking a home, visit www.adoptuskids.org.