From Zeppelin to Mozart

When he was 12 years old, Alex Mariano ’21 picked up a guitar for the first time from his father’s ever-expanding electric guitar collection. He strummed a few chords, not realizing at the time that he would one day be playing classical guitar on stage at SUNY Potsdam’s Crane School of Music.

“Growing up, my dad would always have electric guitars lying around,” Mariano recalled. “As a young kid, I mainly listened to rock music and the blues and wanted to play music from the guitar gods from the ’70s and ’80s, like Jimmy Page, Eddie Van Halen, Yngwie Malmsteen—that’s who I really liked.”

Watching YouTube videos, and websites with tutorials, Mariano took to the guitar like a fish to water. He continued to see improvements over the coming years, learning one song after another, and continuing to raise the bar in his quest for greatness. “All throughout high school, that was my main focus. I would go throughout my day just listening to music whenever I could, the songs and guitar parts that I really wanted to learn, even if they were way out of my league,” he recalled.

He started playing the acoustic guitar, and then classical guitar, moving from the music of rock legends like Led Zeppelin to that of famous classical composers like Vivaldi and Mozart. His senior year, he set his sights on pursuing a degree at SUNY Potsdam’s Crane School of Music, and came to campus for an audition. That’s where he met Dr. Douglas Rubio for the first time, the head of the classical guitar program at Crane, who was overseeing the audition process. Mariano held the guitar on the wrong leg, and remembers other technical missteps, but Rubio still recognized his potential. “I wasn’t really a good performer at that time, but he saw something,” Mariano said. 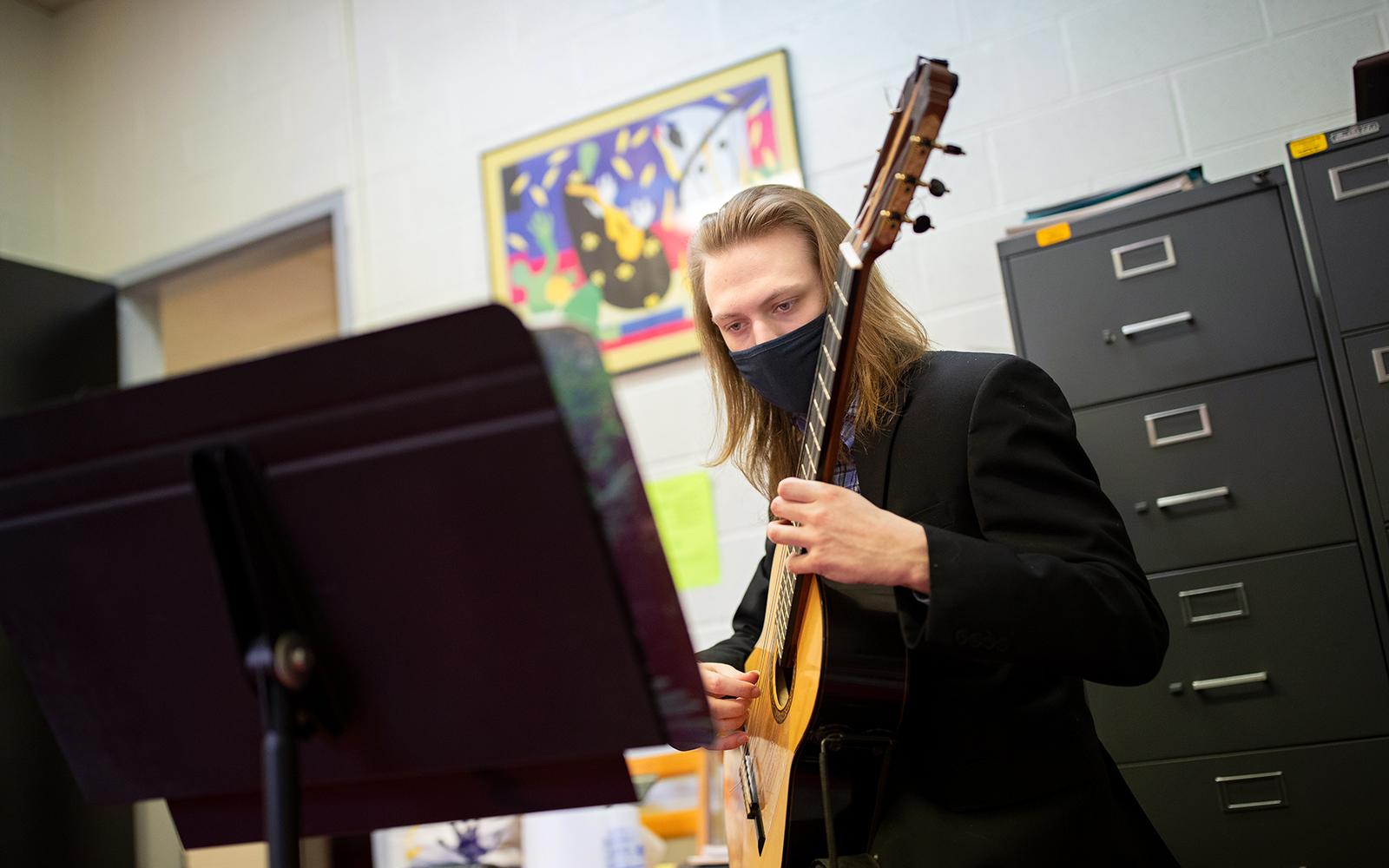 He was accepted at Crane and quickly improved under the guidance of Professor Rubio—a renowned classical guitarist in his own right. Rubio received his Master of Music and Doctor of Musical Arts degrees in classical guitar performance from the University of Southern California's Thornton School of Music. He has also performed extensively as a chamber musician, and won the top prize for the Guitar Foundation of America (GFA) International Duo Guitar Competition. “Dr. Rubio won the GFA, and if you’re a guitar player, it’s the biggest classical guitar event in America,” Mariano said. “It’s pretty interesting coming here and then having that figure as your main professor. He really took me under his wing, as well as everyone else in the studio. Within the first year, my playing improved so much. I love working with Dr. Rubio.”

After his first year, Mariano entered the performance program at Crane, a highly competitive degree program that prepares students for careers as professional musicians. Over the next few years, he continued to improve as a classical guitarist from one-on-one instruction in Rubio’s office, to feedback from his classmates and professors in his guitar studio. He also performed with the Crane Guitar Ensemble on stage at Hosmer Hall and Snell Theater. “I love guitar, and I love to play, but if I didn’t have a good mentor or teacher to guide me through all the ups and downs of learning pieces and different techniques, it would have been a real drag,” he said.

Outside of the classroom, he developed skills as a music educator. In the summer of 2019, he worked at Long Lake Camp for the Arts where he taught guitar lessons for children ranging from eight to 16 years old. For 10 weeks, he helped children at all levels learn to play guitar, spending six to seven hours a day on private or small group lessons. Sitting outside on a sunny patch of grass, he would teach them new songs, letting them choose the musical direction for the day. “It was such a good time. I made so many memories there,” he said.

Mariano had planned to return to the camp in the summer of 2020, but in light of COVID-19, he landed a job at UPS, working in the middle of the night to sort packages and load trucks, some 10,000 to 12,000 boxes on any given shift. This fall he returned to his role as an educator, teaching guitar to a local middle school student—the same age as himself when he started playing guitar.

Every Sunday, he sits down with Kendall Thompson via Zoom to help her become a better musician. His encouraging, and supportive approach has been a source of inspiration and a confidence boost for Thompson. When he discovered that her favorite band was One Direction, he went out of his way to learn one of their songs, “What Makes you Beautiful,” and teach it to her during their next session. “We did that song for two to three weeks,” he said. “She had some experience. She already knew some basic chord shapes, and could play a little bit. So, it didn’t take too long.” 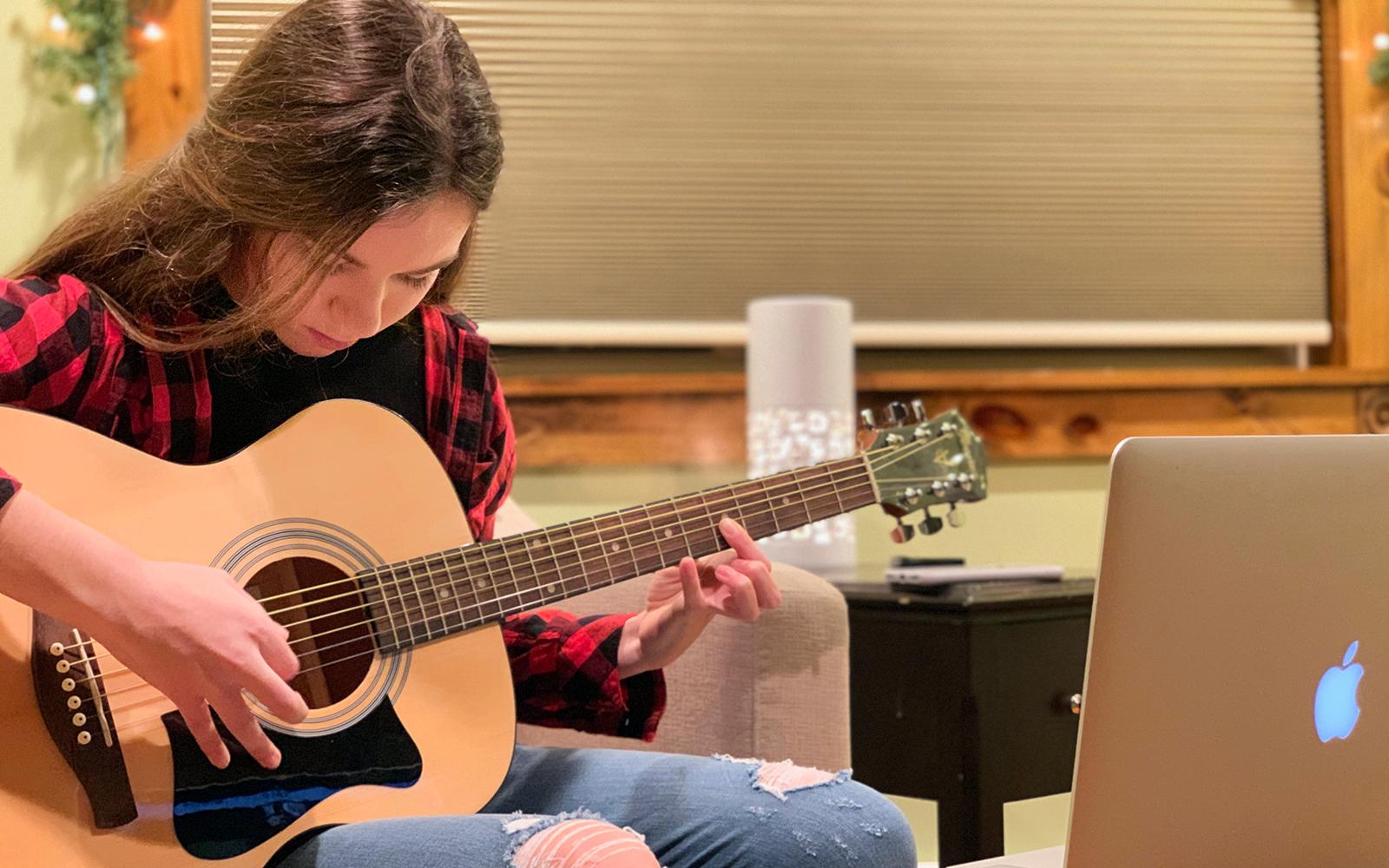 Thompson practices the guitar during a lesson with Mariano.

Mariano’s natural ability as an educator dovetails perfectly with his talents on the guitar. When he graduates from SUNY Potsdam, his career options are endless. Whether he teaches guitar, repairs instruments, or performs on stage—music will always take center stage in his life. “There are a whole bunch of different avenues that music can take me,” he said. “My biggest aspiration is to be a performer, whether it be in a wedding band, or a pit for a musical.”

For more information about The Crane School of Music, visit:
https://www.potsdam.edu/academics/crane-school-music

Article and photos by Jason Hunter. Video by Cory Williams.