A refuge from the grief of COVID-19 became a way to connect with millions of viewers for one man who grew up in Buffalo.

Daniel Mertzlufft '15, a composer and music director with New York City’s iTheatrics, turned to TikTok earlier this year as a way to post and consume lighthearted short videos of modern musical theatre. His latest hit, “The Thanksgiving Musical,” was featured on The Late Late Show, with James Corden, Audra McDonald, Patti Lupone, Josh Gad, Josh Groban, and Kristin Chenoweth all adding their voices to the chorus. The video is a tension-relieving romp through collective pandemic realities, holiday foibles, and even post-election drama, drawing toasts to Mertzlufft from across the entertainment world.

In an interview, Mertzlufft had advice for students of his alma mater, SUNY Potsdam’s Crane School of Music—and really for musicians and artists everywhere in the Empire State struggling to share their work: Just don’t ever, under any circumstance, abandon your craft.

Mertzlufft made viral waves and caught Corden’s attention in late September with “Grocery Store: A New Musical.” The musical parody finds a couple fighting in the aisles during the pandemic, a creation Mertzulft said he quickly tossed together, inspired by Louisa Melcher’s “New York Summer.” The video garnered a huge following and hundreds of duets within the first 24 hours. His arrangement of “Remy the Ratatouille” by Emily Jacobson, based on the 2007 Pixar-Disney movie, also took TikTok by storm this fall and prompted followers to create an entire “Ratatouille” musical.

The surge of successes astonished Mertzlufft, especially since his earlier videos went largely unnoticed. Artistic success can be fluky, and often requires seemingly endless tries and renditions, the courting of chance synchronicities and serendipitous windfalls that are impossible to foresee, before a creation has the resonance to go the distance.

“It goes back to the analogy of casting as many nets and lines as possible and seeing what catches,” said Mertzlufft, who now lives in New York City. “I posted a lot of stuff that didn’t work.” 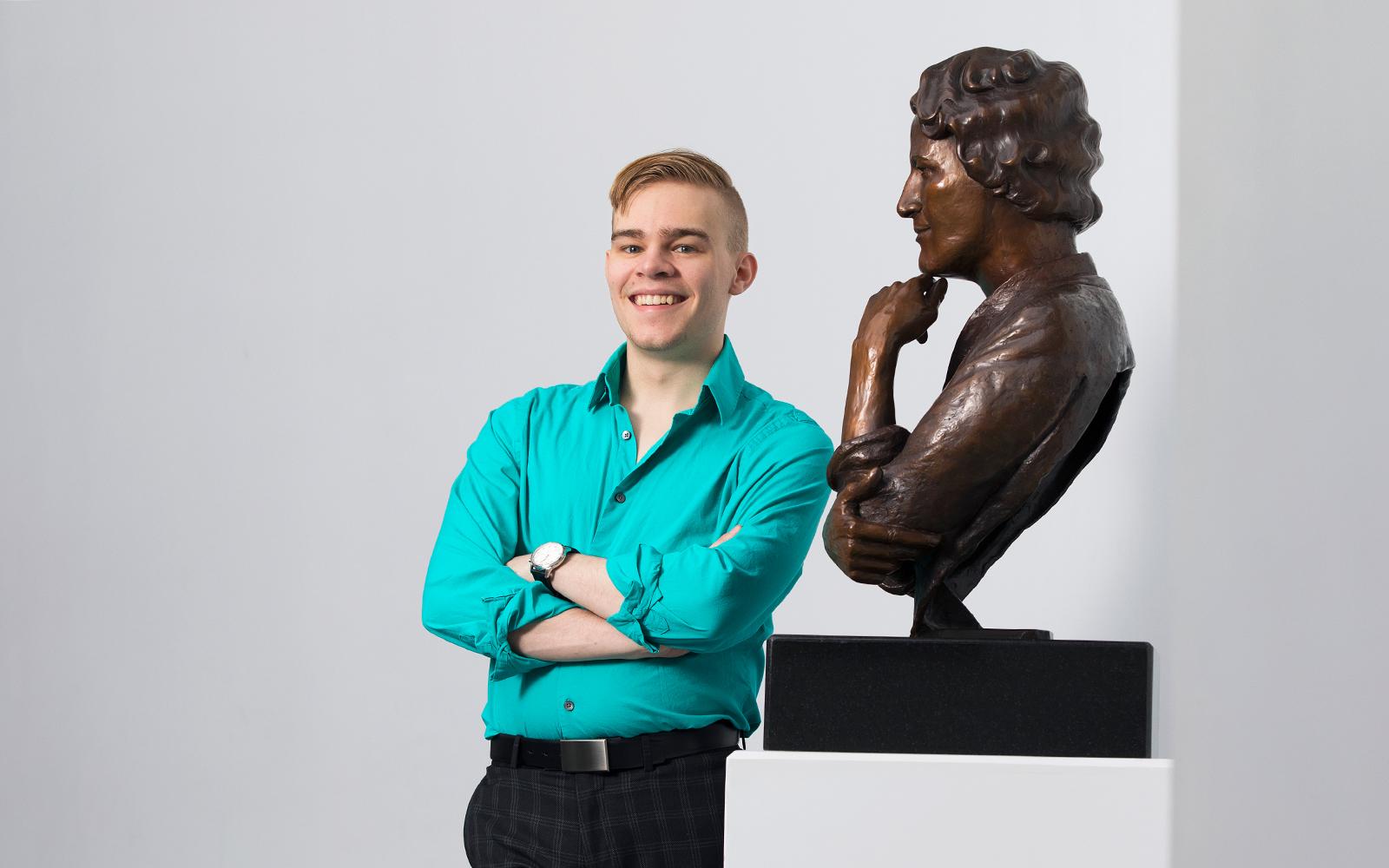 Mertzlufft poses for a photo next to a bust of Helen Hosmer, dean emerita of the Crane School, during a visit to his alma mater in 2017.

Mertzlufft credited his recent success to the nature of the TikTok platform, where users discover and create music videos and share spinoff versions—or duets— of existing videos, a kind of internet karaoke that demonstrates the possibilities when the creativity of one becomes a force of many.

“The only reason Grocery Store worked was because people added onto it, and it became a community effort,” Mertzlufft said. “It’s about putting stuff out there and making new content constantly.”

Mertzlufft finds use in the analogy of art as breaking wave. Ask the surfer exactly how the next lineup will present, and they won’t be able to tell you. But enduring practice of their craft allows the rider to read the water and position themselves to catch the next curl.

“I love the analogy that you never know what the next wave will be,” he said. “It is always unclear. Art should be for yourself, but it is also created to be consumed.”

Mertzlufft’s ongoing projects include “Breathe: Portraits from a Pandemic,” a virtual premiere that revolves around five short stories taking place throughout the pandemic. The production explores the potential strength of the COVID-19 crisis to unite the globe in a common humanity. Mertzlufft handles the finale, music and lyrics in a collaboration with several other composers.

“Hopefully we will have a concert album out in time for the anniversary of the pandemic,” he said.

When he isn’t busy on TikTok, Mertzlufft focuses on teaching at iTheatrics, where he adapts Broadway musicals for elementary, middle and high school student performance and builds resources for teachers. The educational thread carries back to the North Country.

“My student teaching ended up being the most amazing experience that I ever had at SUNY Potsdam,” he said. “They showed me a side of education that I didn’t really know existed. Now at iTheatrics, I work with young students a lot and I’m able to engage that part of my education background.”