The Potsdam College Foundation was established in 1968 to accept gifts on behalf of SUNY Potsdam and support the College. Since 2001, the financial assets of the Foundation have grown from $12 million to $56 million.

The Foundation has completed three successful comprehensive campaigns, which have raised nearly $50 million.

The Foundation currently manages over 400 endowed funds, nearly 25% of which were established in the past 10 years. In the 2020-21 fiscal year, these funds generated over $1.6 million to support scholarships and programs.

Donors to the Foundation include alumni, faculty, staff, emeriti, parents, students and friends. Many donors are recognized for their contributions through their membership in the College’s recognition societies. The President’s Club honors those who give $1,000 in a fiscal year, while the Raymond Legacy Society honors those who establish an endowed fund or make an estate gift arrangement to support the College.

Foundation Board Trustee Ron Fishbeck ’80 and his wife, Teresa, give to SUNY Potsdam because of the role the College played in their success. The couple has established two scholarships: The Fishbeck Foundation Scholarship and the Ronald & Teresa Fishbeck Computer Science Scholarship. Read more about why trustees give.

The fundraising staff at SUNY Potsdam is happy to answer any questions you may have about the Potsdam College Foundation and its impact. Contact (315) 267-2190 with questions. 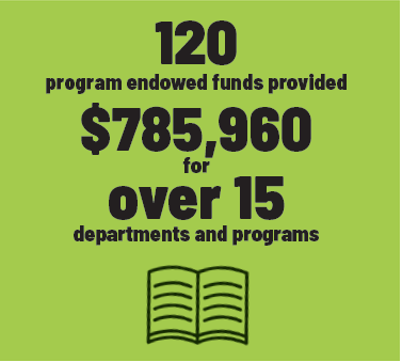